Whether it's iron, silver, or even lithium, top mining stocks can help your portfolio hit paydirt.

Looking for top stocks is kind of like prospecting for ore: You have to sift through a whole lot of rubble before you find the good stuff. And when it comes to mining stocks, the discoveries come in all shapes and sizes.

We asked three of our Motley Fool contributors to pick out a mining stock they think is poised to outperform, and they came back with iron miner Cleveland-Cliffs (CLF 3.98%), precious metals streaming company Wheaton Precious Metals (NYSE: WPM), and Warren Buffett's Berkshire Hathaway (BRK.A 0.59%) (BRK.B 0.43%). Yes, you read that right: Berkshire Hathaway. Here's why they think these mining stocks might be right for your portfolio. 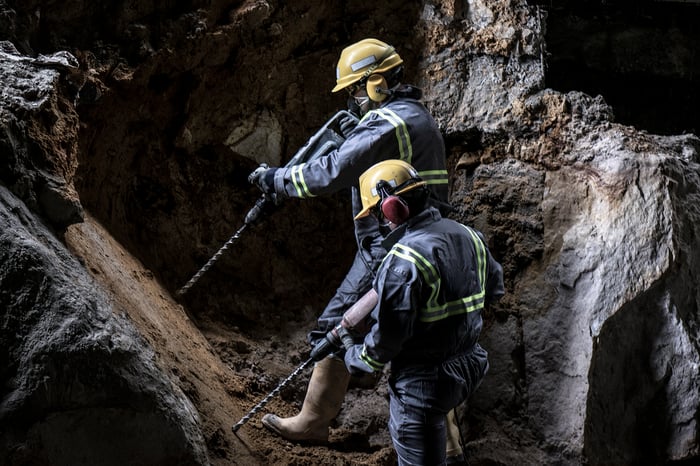 According to a major report on the lithium mining industry released last year, mining company Albemarle produced an estimate 81,000 metric tons of lithium carbonate, making it the world's largest publicly traded producer of the battery raw material. But last month, citing data from a "fund-raising document" it had reviewed, Britain's Financial Times reported that Berkshire Hathaway has begun talks on a project to produce up to 90,000 tons of lithium carbonate from Salton Sea geothermal plants operated by its BHE Renewables business -- and to sell that lithium to Tesla.

Berkshire said no agreements have been signed, and declined media requests to discuss the matter further. Similar ideas to produce lithium from California's Salton Sea were abandoned by another miner recently, but that was said to be due to lack of access to capital. That's not a problem for Berkshire, which boasts nearly $100 billion in cash reserves, according to the most recent data from S&P Global Market Intelligence.

Assuming this project goes ahead, Berkshire Hathaway could leapfrog all comers to instantly become the world's largest producer of lithium for rechargeable batteries, which would definitely make it a mining stock worth watching.

Check out the latest earnings call transcripts for Cleveland-Cliffs, Wheaton Precious Metals, and other companies we cover.

2019 could be huge for Cleveland-Cliffs

Tyler Crowe (Cleveland-Cliffs): Whenever we talk about factors out of a company's control, they are typically things that are going to hurt the company. But over the next several months and potentially the next year or two, iron ore miner Cleveland-Cliffs could benefit immensely from events completely out of its control.

Late last month, a dam holding back mining tailings burst at one of the operations of Brazilian iron-ore mining giant Vale (VALE -0.32%). It was the second dam collapse in less than five years that caused catastrophic damage and killed several hundred people. As a result, Vale has elected to shutter several of its mines with similar tailings dams.

While this isn't likely to impact Cleveland-Cliffs directly -- the company only sells iron ore pellets to U.S. steel manufacturers, and Vale does not sell to the U.S. -- there are some knock-on pricing impacts that could help bolster Cleveland-Cliffs' bottom line.

For one, both Vale and Cleveland-Cliffs sell higher-grade iron ore in the form of fines (iron ore powder) and pellets. Ore with higher iron content has been in much greater demand lately as Chinese steel manufacturers have used higher quality ores to cut down on pollution. As recently as November, iron ore pellets were selling for as high as $150 a ton in China, compared with $75 per ton for 62% iron content fines. What's more, Cleveland-Cliffs is also able to pass along a bit of a price premium for its ore because of much lower transportation costs for domestic steelmakers. The combination of cuts in high-quality ore supplies, increased appetite for pellets worldwide, and Cleveland-Cliffs' ability to cut shipping costs suggests that the company will be able to charge much more for its ore in the coming year. Management mentioned on its most recent earnings call that it expects sales to be in the range of $113 to $118 per long ton, versus $99 per long ton in the fourth quarter of 2018.

Cleveland-Cliffs had already done a commendable job cleaning up its balance sheet, returning to profitability, reinstating a dividend, and starting a share repurchase program. All these efforts would likely lead to a great year for the company. With the added bonus of an iron-ore supply shortage, though, this could be a truly remarkable year. 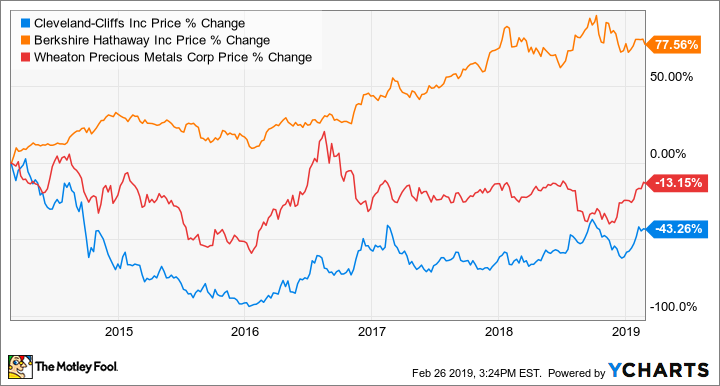 A stream of riches

Mines are expensive to get started, and traditional precious-metals miners often go deep into the red to set up their mines, hoping that the value of the metals they produce will eventually offset those huge up-front costs before the mine is depleted and needs to be shut down. Streaming companies turn that model upside down. They provide funding to the miner in return for a steep discount on the precious metals the mine produces.

Wheaton used to focus exclusively on silver, but it has since expanded into gold, and now is diversifying its portfolio even further by buying rights from other streaming companies to bring palladium and cobalt into the mix. Why palladium and cobalt? Both are important metals to the automotive industry, with cobalt a major component of batteries and palladium used in emissions control equipment.

These moves should help protect investors if cyclical precious-metal prices plummet. Although streaming companies by the nature of their business model tend to be insulated from such price fluctuations, the market doesn't always give them the benefit of the doubt. That's one reason Wheaton shares are down over the last five years. Today, Wheaton trades at about 35 times earnings, which may sound high, but is actually on the lower end of its historic valuation. That makes March an excellent time to keep an eye on this offbeat mining industry player.