It might have found a better way to give supermarket customers a better deal.

Has Amazon.com (AMZN -2.02%) ended its efforts to change Whole Foods' image as a place only well-heeled consumers can shop?

It supposedly discontinued the supermarket's discount chain of 365 stores because the price disparity between the two had narrowed, so it wasn't necessary to have two separate banners. But the e-commerce giant may have decided that fighting the "Whole Paycheck" image was no longer worth the effort. 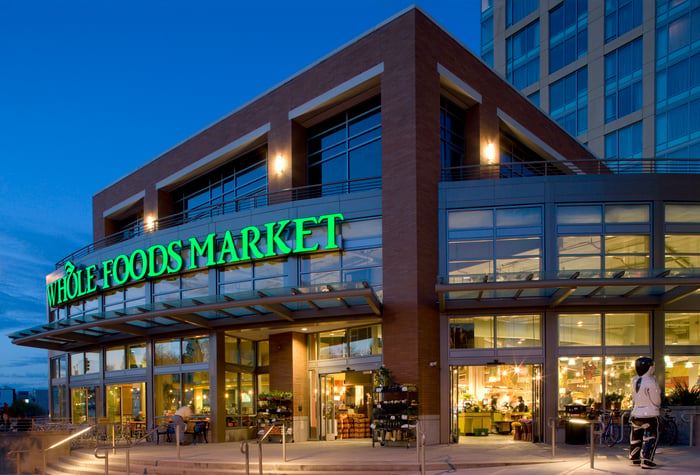 The Wall Street Journal says prices on some 550 items sold at Whole Foods are going up because of pressure from consumer product companies to offset their higher costs of packaging, ingredients, and transportation, and now it reports Amazon is ready to launch an entirely new chain of brick-and-mortar grocery stores completely separate from Whole Foods.

With an ability to sell items that the organic grocer wouldn't, and presumably at a lower price, Amazon could be taking a two-path approach that lets Whole Foods continue to be the upscale grocery store people think it is, while giving them a new opportunity to shop at a traditional supermarket under the Amazon banner.

No longer holding back the tide

Consumers never really bought into the idea that Whole Foods wasn't still Whole Paycheck. Despite Amazon making a big splash in cutting prices when it first purchased the grocer, market researchers subsequently found that a basket of goods bought before and after the acquisition really weren't all that different in price. Consumers could get baked goods and beverages at a lower price, but most other prices were unchanged.

There were, of course, good reasons that things like frozen foods didn't see a price drop, because the costs to keep them frozen, such as electricity and freezer cases, make them more expensive. But now manufacturers including Colgate-Palmolive, Clorox, and Procter & Gamble are also reportedly beginning to hike prices because commodity costs are rising, and Amazon no longer seems willing defray those higher costs for consumers.

And now, with a new grocery-store concept in the works, it doesn't have to. Amazon will be able to sell items that Whole Foods' organic mandate and tough sourcing rules preclude.

The Journal says Amazon has signed leases in cities including San Francisco, Seattle, Chicago, Philadelphia, and Washington, with Los Angeles expected to be the site of the first store, possibly before the end of the year.

Having two different concepts -- one catering to a more upscale consumer, and the other more traditional -- could help Amazon capture a broader spectrum of food shoppers.

It's a strategy that rival Walmart (WMT -0.54%) is pursuing. Its superstores offer everyday low prices, but its Jet.com site provide selections for more well-heeled consumers. And during Walmart's fourth-quarter earnings conference call with analysts last month, CEO Doug McMillon said he was pleased with the role Jet.com is playing in attracting new brands and urban millennials because it allowed Walmart to try new and different strategies.

Walmart's fourth-quarter earnings beat analyst expectations on the top and bottom lines, and the company credited additional grocery pickup and delivery options, as well as an expanded online selection, for helping e-commerce sales rise 43% for the period.

So as Walmart is challenging Amazon's encroachment on its turf, Amazon may be doing the same to Walmart. And a traditional supermarket would be more effective than the many specialty retail outlets like Amazon Go, Amazon 4-star, and Amazon Books that it is experimenting with.

Although the rising prices at Whole Foods may be due more to external factors, such as manufacturers raising prices, grocers have the option of eating some of the costs. The fact that Amazon is allowing them to rise on hundreds of items suggests it is no longer willing to absorb the increases, and has accepted Whole Foods as the upscale shopping experience it's always been.