Shares of Gap (NYSE:GPS) spiked over 16% Friday, as the company announced it would be spinning off Old Navy into a separate company, while retaining its collection of other brands --  Gap, Banana Republic, Athleta, Hill City, and Intermix -- in a newly named company temporarily called, "NewCo." Each new company will be roughly equal in size by revenue, and Gap expects the transition to happen sometime in 2020.

At first, it may seem odd that splitting assets into separate companies would change anything about a company's valuation. After all, won't two companies still add up to the same amount of value, apart or together?

In fact, it will actually be more expensive to run two separate companies, each of which will have its own CEO, board of directors, insurance policies, etc. After all, companies acquire others to achieve "cost synergies." Splitting up does the opposite.

Management's rationale for splitting up the two companies was also confusing. I think that's because the move has more to do with things it may not want to admit, such as market valuations, M&A, and the chance to change the company's name away from its worst-performing brand.

Check out the latest earnings call transcript for Gap Inc.

Management's official explanation attempted, but ultimately failed, to convince on what the two companies could do separately that they couldn't also do together. For instance, while NewCo will, "invest in digital, omni-channel and data analytics," and, "refine [the] Gap brand store fleet," Old Navy will increase its "flexibility, focus and control needed to increase customer access by applying strategic real estate strategy [and] evolving [its] omni-channel model."

That sounds pretty similar: optimizing the physical footprint while investing in digital. And it's not surprising -- it's what all retailers should be doing.

Off-price booming; others, not so much

While management's explanation was a bit ham-handed, Old Navy is in fact headed in the opposite direction of Gap's other big brands: It's actually growing.

Old Navy is having success in the booming off-price retail market segment, whereas middle and higher-end brands Banana Republic and Athleta appeal to more niche audiences. In fact, older brands Banana Republic and Gap are significantly over-stored for the new age of retail, which is why Gap will shut 230 specialty stores this year. That's an increase (and acceleration) over its previous closures target, which was originally for 200 over a three-year period.

By separating the two companies, each management team can pursue its own strategy, which at Old Navy will be to grow, and at NewCo to manage a decline.

Still, why couldn't these brands operate underneath one corporate umbrella along with a mass-market brand in a conglomerate style?

One reason could be future mergers and acquisitions. Off-price rival TJX Companies contains both the TJ Maxx and Marshall's off-price brands. It's possible that Old Navy could either go it alone, or merge with another off-price merchandiser such as TJX, Ross Stores, or Burlington Stores.

Meanwhile, NewCo could further expand its brand portfolio diversification, either from the public or private markets, where newer niche clothing brands may pop up.

So while there may be dis-synergies from the breakup, it's possible Newco and Old Navy could pick up additional synergies in the future, albeit with more appropriate partners.

And the biggest reason of all

Finally, by separating the two companies, investors could reap instant awards, as the value of Old Navy will be "unlocked" for all to see. Despite the recent surge, Gap's stock still trades at a rather pedestrian 11.4 times earnings. Compare that with other "pure-play" off-price retailers: 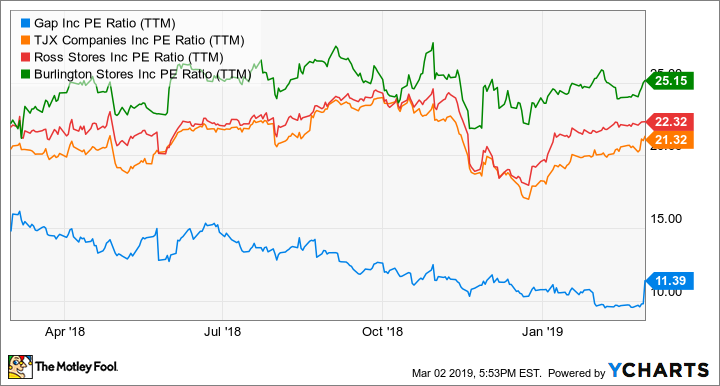 It looks like Old Navy, once spun off, could instantly increase its multiple substantially as a stand-alone offering, whereas its value was previously "hidden" when grouped together with the shrinking brands of Banana Republic and Gap.

The question is...how will the remaining "NewCo" be valued? That's hard to say, as the remaining company is currently composed of 87% Gap and Banana Republic. Last quarter, Gap posted a 5% decline in comparable-store sales, while Banana Republic posted negative 1% comps. So, "NewCo" may not garner much enthusiasm. Nevertheless, the combined company's overall multiple is already rather low, which means there may be limited downside from here.

Therefore, the separated companies may end up being worth significantly more apart than they were together. Unlike many businesses, Gap's parts appear to be worth more than their sum.