Just a couple of months ago, AI-powered security camera maker Lighthouse shut down after its first product, its eponymous Lighthouse camera, was a commercial flop. The start-up had raised around $17 million, according to Crunchbase, and launched the $300 device (which also required a $10-per-month subscription) just over a year ago. Lighthouse's technology leveraged 3D sensors and machine learning in order to recognize faces and monitor environments, and the company had high hopes of challenging Amazon.com (NASDAQ:AMZN) and Alphabet (NASDAQ:GOOG) (NASDAQ:GOOGL) subsidiary Google in the smart-home space.

Apple (NASDAQ:AAPL) has now reportedly scooped up the defunct start-up's intellectual property. What for? 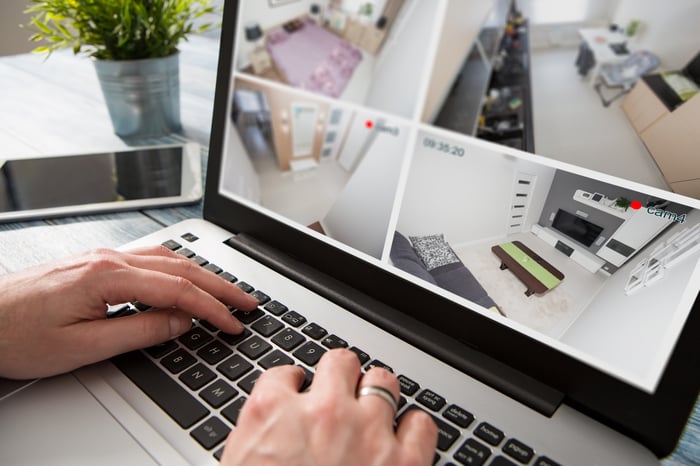 Lighthouse was working on 3D sensing and facial recognition

IAM reports (via The Verge) that Apple has acquired a handful of patents from Lighthouse. It would be tempting to think that Apple has grand plans to revitalize is struggling smart-home strategy or otherwise wants to make a smart-home security camera, particularly as Amazon acquired Ring for $1 billion a year ago and Google's Nest bought Dropcam for $555 million in 2014.

However, the reality is probably a lot less exciting. There have been no reports that Apple is developing smart-home hardware, and the Mac maker has been preoccupied with building new online services in order to grow that operating segment. It's worth noting that Lighthouse's patents cover computer vision, facial recognition, and 3D sensing -- all critical components of iPhones and Face ID.

Apple's Face ID, which is a 3D facial recognition technology introduced in 2017, bears some remarkable similarities to Lighthouse patents. For example, one patent details "obtaining a depth-data frame of an environment using a depth-sensing camera and an infrared illuminator, where the environment is illuminated by an illumination pattern emitted by the infrared illuminator." Apple's TrueDepth camera system uses an infrared camera, an infrared dot projector known as a vertical-cavity surface-emitting laser (VCSEL), and a flood illuminator, among other components.

Even now, Face ID remains a key differentiator for the iPhone, as Android rivals have yet to catch up in 3D facial recognition. Competing facial recognition systems are mostly still in 2D -- including the one found in Samsung's latest flagship, the Galaxy S10 -- which offers far less security and can be spoofed by photographs.

The best defense is buying a bunch of patents

Beyond any potential uses in smart-home technology, Apple has a keen interest in beefing up its patent portfolio around 3D facial recognition.

Not only does the company want to maintain its lead over the competition by keeping IP out of its rivals' hands, but it's expected to incorporate a rear-facing 3D sensor in a future iPhone at some point as part of its augmented reality (AR) platform. Such a device was initially rumored to launch in 2019, but this timeline seems to have been pushed back, according to respected Apple analyst Ming-Chi Kuo. Lighthouse's 3D sensing patents could contribute to that product's development.

There's also the matter of patent litigation. Apple lost an appeal against VirnetX in January concerning FaceTime and iMessage and now has to pay the patent troll hundreds of millions of dollars. Last year, Apple settled with Immersion over Force Touch and 3D Touch. In addition to playing competitive defense, keeping the IP out of the hands of patent trolls could also easily pay for itself.