FCA's efforts to boost its upscale brand haven't gone well. Is this the car that will change that?

Fiat Chrysler Automobiles (FCAU) has taken the wraps off a new concept for its upscale Alfa Romeo brand. Unsurprisingly, given global sales trends, it's a compact SUV -- but in a bit of a surprise for Alfa, it's also a plug-in hybrid.

FCA said the Alfa Romeo Tonale concept, unveiled at the Geneva Motor Show on Tuesday, is a preview of a compact SUV that it will launch in the not-too-distant future -- and that it hopes will be a key driver of the brand's future growth. Here's what we know. 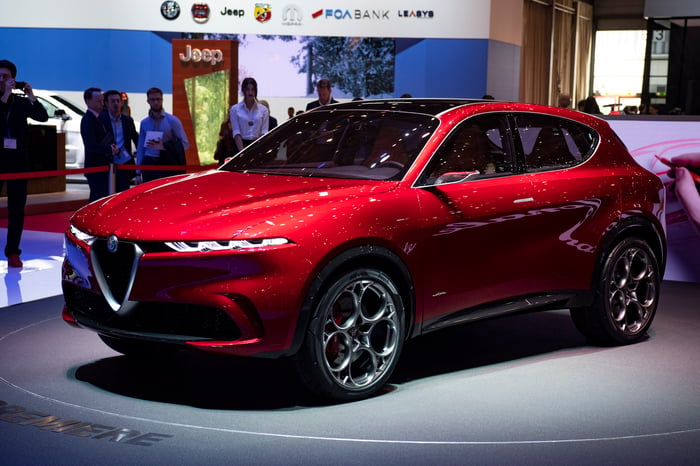 What it is: A premium compact SUV with Italian flair

We should be clear about this up front: This is a show car. Although Alfa Romeo chief Tim Kuniskis said that a Tonale-based production vehicle is in the works, the Tonale concept includes some features and details that almost certainly won't make it to your local Alfa dealership. And there's a lot we don't know, possibly because FCA hasn't yet made final decisions about the upcoming production model.

But we do know that the Tonale concept is a compact five-passenger crossover SUV that displays the brand's emphasis on upscale styling and performance. We also know that it's powered by a plug-in hybrid drivetrain.

FCA wouldn't share any specifics about the concept vehicle's hybrid drivetrain, aside from strong hints that it will provide an exciting driving experience. It also wouldn't say exactly (or even approximately) when the production version will arrive. But Kuniskis did say that the production version of the Tonale will introduce "electrification" to the brand, so a hybrid system of some kind is apparently in the works.

(As an aside, "electrification" is an interesting challenge for a brand like Alfa Romeo, which has built its appeal in part on the sound and dynamics of its highly responsive internal-combustion engines. Alfa's former corporate sibling Ferrari (RACE 2.40%) has already offered a hybrid model, the limited-edition LaFerrari supercar, which used electric motors to boost performance and fuel economy in ways that didn't subtract from the traditional V12-powered Ferrari driving experience. Ferrari is now working to bring similar hybrid technology to its core model lineup; it's likely that Alfa will look to follow Ferrari's example, to the extent that it can.) 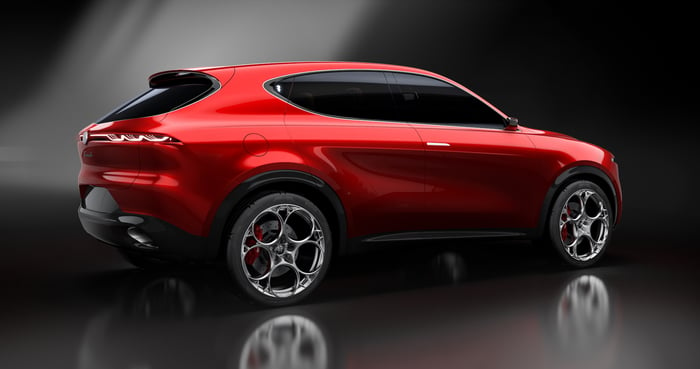 Why it's important: Alfa Romeo needs a sales boost

Nearly all of those sales came from just two models. Alfa Romeo's Giulia sedan and Stelvio SUV have been highly praised by reviewers for their thrilling driving dynamics and eye-catching styling -- and panned by many of those same reviewers for ergonomic flaws, reliability woes, and a general lack of refinement in daily use.

To some extent, that's just Alfa Romeo. When one chooses an Alfa, one trades some of the refinement of a BMW or Lexus for a driving experience with more character and a vehicle with more style. But those concerns have limited the brand's sales to enthusiasts who are willing to put up with the quirks. If Alfa could get past them -- just a bit -- then its appeal might broaden, and its sales might get a boost.

FCA is making a lot of hay on Jeeps and trucks at the moment, but its CEO Mike Manley would love to push the company's margins higher. Selling more upscale, high-profit Alfa Romeos would help.

Even if if the Tonale arrives with Stelvio-like refinement, it'll help. Global demand for compact crossovers is booming, and the Tonale -- a gorgeous, exciting crossover SUV that's one size down (and presumably, one price point down) from the Stelvio -- is a no-brainer product, all but certain to drive Alfa's annual sales higher.

But the Tonale's appeal will be limited if it can't improve on the issues we've seen in the Stelvio and Giulia, and this concept doesn't tell us anything on that front.

The bottom line: It'll sell, but how many?

The Tonale is the obvious next move for Alfa Romeo, and it's sure to boost the brand's sales to some extent. But we'll need to see the production version before we can say much more about its margin-boosting prospects.