If SunPower Corporation (SPWR 2.70%) is going to return to profitability in 2019, it's going to be on the back of the solar industry's most efficient solar panels. SunPower has always had a leg up on the competition when it comes to efficiency, and this year, it hopes to expand that margin.

On Tuesday, the company gave details about its next-generation technology -- now known as A-Series -- solar panels. They'll be the first commercial solar panels over 400 watts and come equipped with a microinverter that makes it easy to install on any home or business. Maybe this is the product SunPower needs to turn itself around?

What is SunPower A-Series?

The biggest difference between SunPower's X-Series product and the new A-Series is size. Solar cells are 65% larger, and the panel itself is larger than previous models. This reduces connection points on the roof and increases the amount of space that's collecting solar energy.

The result is the first 400-watt solar panel for residential and commercial solar with the option to upgrade to a 415-watt model. Homeowners can pack more solar power onto their roofs than ever, but that's not the only thing holding back SunPower as a company right now.

Check out the latest earnings call transcript for SunPower.

Cost will be key

There's no question that SunPower can make the most efficient solar cells and panels on the market. What it hasn't proven is the ability to make them at a cost that competes with less-efficient commodity solar panels.

SunPower's management has said that process improvements with A-Series and a bigger cell should help lower costs and improve margins. Based on the losses that have mounted over the last few years, SunPower needs to improve margins quickly. 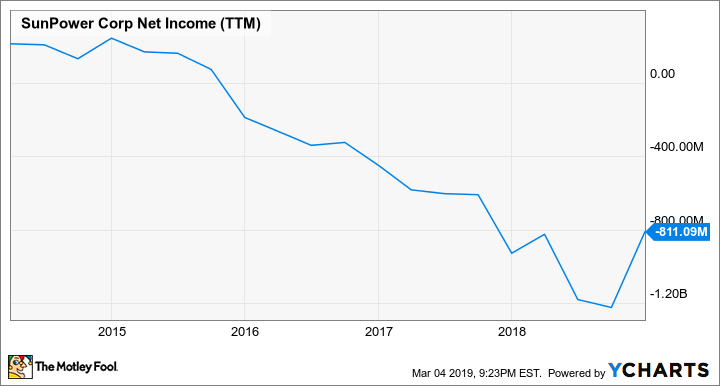 The larger solar cell should help SunPower lower its cost per watt and reduce panel assembly costs. The large solar panel size should also reduce installation costs, which will ultimately help lower the cost to the end customer. Combined, SunPower hopes the improvements will help the company regain profitability.

Heading down the right track

SunPower is improving in the right places in 2019, doubling down on efficiency and the residential and commercial markets where efficient solar panels are most economical. However, the company has to prove to investors that it can increase margins and get back to profitability before the stock will make a big move higher.

One challenge SunPower may face is scale. The company will have a small amount of A-Series production in 2019 and may have only a few hundred MW in 2020. It needs to reach multigigawatt scale to compete with rivals in solar manufacturing, which is why management has said it's looking for manufacturing partners to help fund expansion.

SunPower is heading down the right track in 2019, but there are still a lot of unknowns for investors bullish on the stock. I'd keep an eye on costs, margins, and improving A-Series scale, which will tell us if this company is destined for greatness or will continue muddling along in solar energy.