Amazon.com (NASDAQ:AMZN) has been angling for a piece of the $660 billion grocery industry for more than a decade.

In 2007, the company launched Amazon Fresh, an e-commerce grocery delivery service, in its hometown of Seattle. But Fresh's slow growth only gave it a sliver of the massive supermarket industry, so Amazon acquired Whole Foods Market for $13.7 billion in 2017, immediately making it a major player in the industry.

Now, according to The Wall Street Journal, Amazon's ambitions in the industry extend beyond Whole Foods as the e-commerce giant is planning to open its own supermarkets, targeting lower prices and products, like Coca-Cola, that can't be sold at Whole Foods. 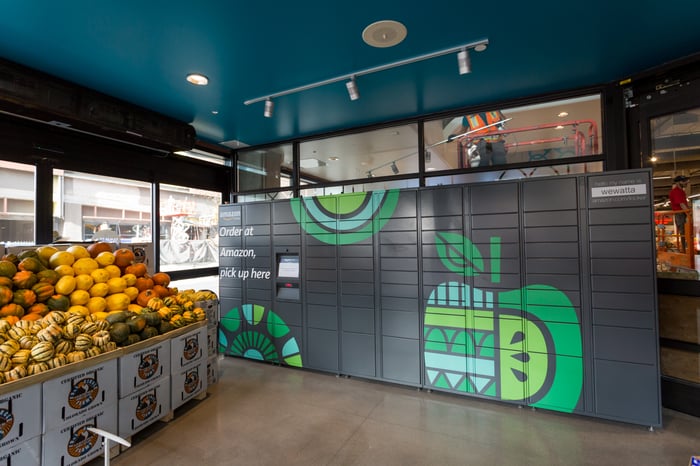 Amazon stock rose 2% that day while supermarket stocks such as Kroger (NYSE:KR) briefly tumbled, in a move reminiscent of the sector's plunge when Amazon said it would acquire Whole Foods.

While it's clear that the e-commerce giant, with its reputation for aggressive pricing and history of favoring market share gains over profits, poses a threat to its new supermarket rivals, it's less evident why Amazon is so focused on the industry. After all, supermarkets are a slow-growth, low-margin industry. Amazon, on the other hand is primarily seen a tech giant, and it's valued as such, with a P/E ratio of 84.

The market takes for granted that Amazon wants to sell all things to all consumers, but it may not be in investors' best interest for the company to launch its own grocery business or pursue a significant share in the industry to begin with. Such a move deserves a closer examination.

Amazon's acquisition of Whole Foods was seen as a declaration of war on the supermarket industry, so it wasn't surprising to see stocks plunge, some by double digits, on the news. However, 18 months after Amazon took over the natural-grocery chain, its results have been mixed, and it hasn't decimated its rivals the way some expected back then.

Though the company has made some changes, including offering benefits to Prime members including delivery, and selling gadgets like Echo devices, Whole Foods is largely the same, and it doesn't seem to have gained significant market share. Amazon doesn't break out Whole Foods results, but it does provide sales for physical stores, which are made up almost entirely of Whole Foods locations but also include a handful of Amazon Books stores, four-star stores, and Amazon Go locations.

Though sales at Amazon's physical stores fell 3% in the fourth quarter, CFO Brian Olsavsky said on the recent earnings call that adjusting for a calendar shift and for orders that have moved from in-store to online, "apples-to-apples" growth was up about 6%.  Six percent growth from Whole Foods is solid, but for a company used to posting quarterly revenue growth of 20%, 30%, or even 40%, it's hardly what investors are used to.

Meanwhile, something else unexpected happened. Amazon's new competition didn't stand still; it responded aggressively. Walmart (NYSE:WMT), the nation's leading grocer, has rapidly expanded its grocery pickup and delivery programs and says it's gained market share in groceries. In its fourth quarter, its comparable sales rose 4.2%, and it's surpassed Amazon as the leading online grocer.  Kroger has also expanded a similar program, called ClickList, and even Costco (NASDAQ:COST) launched an e-commerce delivery program, partnering with Instacart to offer same-day delivery of perishables.

Part of what makes tech stocks so appealing is their scalability. An e-commerce business, for instance, can easily ramp up sales, as it's exposed to customers around the country, or even the world. Physical stores, on the other hand, can only reach customers within a certain geographic radius. The total addressable market for an individual store is much smaller than for a website.

The supermarket industry suffers from this lack of scalability. Building a national supermarket business requires finding real estate, negotiating contracts, building it out, and hiring hundreds of staff members, which takes time, effort, and money. Therefore, unseating a national grocer like Walmart or Kroger from their leadership position is not going to be easy.

The Wall Street Journal said Amazon was considering acquiring regional supermarket chains to jump-start growth of its homegrown chain, but doing so too aggressively could catch the eye of antitrust regulators, and even if it takes the acquisition approach, national chains dominate the market in much of the country.

Even in the e-commerce era, groceries have been one of the few segments that have been relatively protected from online disruption. Even as more companies move toward delivery, it's become clear that these businesses need an actual store to serve as a base for deliveries and pickups. Just having warehouses, as Amazon Fresh does, isn't enough.

Therefore, it seems Amazon may be at a competitive disadvantage in supermarkets, since its only assets appear to be its customer reputation and its ability to entice customers through benefits in its Prime loyalty program. However, even if the value proposition pays off for customers, the potential return on investment is still likely to be slim.

The one thing that could change the equation here is the "Just Walk Out" technology behind its cashierless Amazon Go stores. Through a network of cameras and sensors, the technology automatically charges customers for what they take off shelves.

According to The Wall Street Journal, Amazon has been testing the technology to use in larger stores, though if it were able to do so, it would make the most sense to apply it to Whole Foods locations as that chain is already built on a premium experience and customers are more likely to be time-sensitive.

Amazon is one of the most inventive companies in the modern world, and it has the potential to disrupt the supermarket industry with "Just Walk Out" technology or something similar. However, if the company was currently capable of doing that, we would probably have seen evidence of it in its Whole Foods stores.

Without such a breakthrough innovation, Amazon's push further into groceries, an industry with slim profits, little growth, and no scalability, looks like a mistake.

Unseating Walmart or Kroger from their grocery leadership is not going to be easy, as the two companies have nationwide footprints.