Here's what could go wrong for Ford, Booking Holdings, and Coca-Cola in a no-deal exit from the EU.

That's the date that the United Kingdom is set to leave the European Union, making Brexit official. However, Prime Minister Theresa May and the British Parliament have yet to secure a departure deal with the EU that sets key regulations around trade and immigration, because lawmakers have repeatedly rejected the agreements that May forged with the EU.

If no agreement is approved by the deadline, the U.K. would experience a so-called "hard Brexit" putting trade rules in place that predate its involvement in the EU, and the country would lose tariff-free access to trade partners in the European bloc. Numerous companies have warned about the consequences of such a move; McDonald's and KFC have said there could be food shortages if the country leaves without a deal.

While the consequences of a hard Brexit could affect many businesses across the board and potentially damage the British economy, three companies that are particularly vulnerable to a no-deal Brexit are Ford (F 2.33%), Booking Holdings (BKNG 4.74%), and Coca-Cola (KO 0.08%). Let's take a closer look at each one. 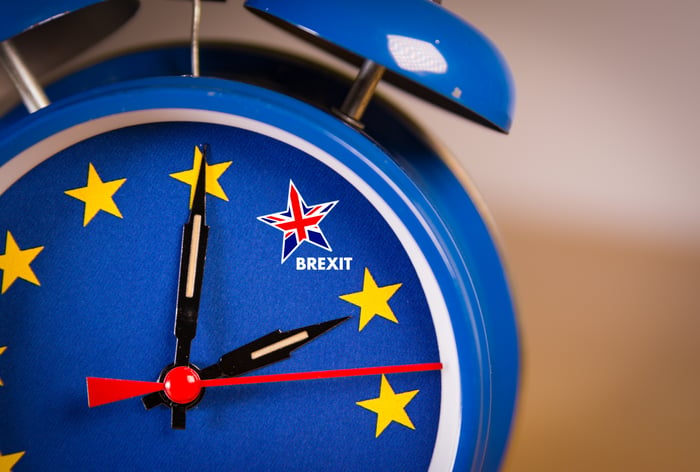 While rival General Motors sold its European operations in 2017, Ford stuck with the difficult European market, where it lost $398 million last year. The company could get hammered by a hard Brexit.

Ford is already the U.K's top-selling auto brand, and it hasn't minced words about the Brexit threat, saying in January to Sky News (a Comcast subsidiary) that a no-deal Brexit "would severely impact Ford's operations in the U.K. and across Europe." The company is already cutting jobs in the region, and predicted that a hard Brexit would cost it $800 million in 2019.

Not only is the auto industry dependent on complex international supply chains, but the sector is also sensitive to macroeconomic trends, selling both commercial vehicles to businesses, and passenger cars, which are big-ticket items for consumers. Ford said the massive loss would result from trade delays, slower economic growth, tariffs, and a weaker British pound. The carmaker also said the absence of a deal could lead to further job losses, and the possibility of its British plants closing.

In February, Ford made contingency plans to move production away from the U.K. "Such a situation would be catastrophic for the U.K. auto industry and Ford's manufacturing operations in the country," the company said. Other automakers with significant exposure to the risks of Brexit, including Jaguar Land Rover and Toyota, have issued similar warnings.

Check out the latest earnings call transcript for Ford, Booking Holdings, and Coca-Cola.

A hit to the travel industry

Shares of Booking Holdings, the world's largest online travel agency and parent of online travel brands Booking.com, Priceline, and KAYAK, tumbled after its recent earnings report on worries about a slowdown in its European business. Booking CEO Glenn Fogel warned on his company's recent earnings call that Brexit "is obviously creating a tremendous amount of uncertainty," adding that consumers were anxious about how travel regulations might be affected by a no-deal Brexit. British travelers could face passport issues, and a currency devaluation could also dissuade them from visiting the Continent. The potential economic headwinds weigh on the entire travel industry, which is sensitive to macroeconomic trends.

Though Fogel pointed to other issues dampening travel spending, such as the yellow-vest protests in France and a slowing economy in Germany, other travel companies have also acknowledged the consequences of Brexit. In November, airlines Virgin Atlantic and Jet2 said Britons were more reluctant to spend on travel, in part due to the weaker British pound.

Meanwhile, Booking Holdings' outlook calls for significantly slower growth: It expects an increase in room bookings of just 5% to 7% in constant currency for the first quarter, down from 13% a year ago.

A beverage giant with significant exposure

While Coca-Cola is a global beverage company, and sales in the U.K. are a relatively small percentage of its total sales, the company is exposed to Brexit in a number of ways.

Back in 2017, the beverage giant warned that Brexit could put 1,750 Irish jobs at risk if border tariffs were enforced, showing that the company has been preparing for the divorce since voters in the U.K. approved the split. More recently, Coca-Cola's independent bottler Coca-Cola European Partners has started stockpiling ingredients ahead of a potential hard Brexit, on concerns that it could experience tariffs or delays on new shipments.

Beyond the concerns that any beverage seller would have of ensuring that enough fast-turning product remained available, Coca-Cola also faces Brexit risks from its acquisition of Costa Coffee last year for $5.1 billion. Costa is the biggest coffee chain in the U.K., with more than 2,000 locations, and could be particularly vulnerable if a hard Brexit delayed inventory arrivals. Costa Coffee's former owner, Whitbread PLC, warned multiple times about possible effects of Brexit, including potential labor shortages and general economic malaise. With Coke's takeover, however, those problems now sit solely in the beverage giant's hands, and could foil its expensive bid to break into the coffee business.

While plenty of global companies are grappling with uncertainty about what could come from a hard Brexit, it's still possible that the U.K. could reach an agreement with the EU before the deadline.

Parliament is set to vote again next week on the deal Prime Minister May negotiated with the EU. It's the same deal that lawmakers historically voted down in January, but the EU has said it will not renegotiate the agreement. That vote and subsequent ones will determine whether the U.K. can find a way to reach an agreement on the details of its departure, take the hard-Brexit route, or extend the deadline.

As lawmakers search for options, the British economy hangs in the balance.