Please ensure Javascript is enabled for purposes of website accessibility
Free Article Join Over 1 Million Premium Members And Get More In-Depth Stock Guidance and Research
By Adam Levy - Updated Apr 12, 2019 at 9:48AM

And would it be worth more if Google spun it out?

YouTube is one of the fastest-growing parts of Google, the biggest business under the massive Alphabet ( GOOG 1.52% ) ( GOOGL 1.36% ) umbrella. The secular trend in digital video advertising has pushed YouTube toward the top in the company's quarterly list of revenue drivers.

But Alphabet still doesn't split out YouTube revenue despite its growing importance; it's lumped in with Google properties revenue in the company's earnings reports. Analysts estimate the company brought in $14 billion to $15 billion in net revenue last year, which is over 10% of Alphabet's total revenue. But considering its growth and position in the digital video ad market, YouTube could be worth a much higher percentage of Alphabet's market value. 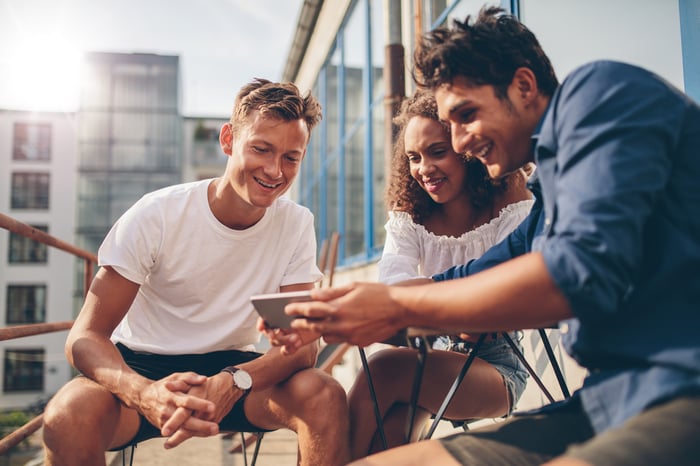 Needham's Laura Martin suggests YouTube's closest comparable is Netflix ( NFLX -0.21% ). Indeed, both companies are at the forefront of digital video, and both are showing substantial revenue growth.

YouTube's audience is more heavily weighted toward international viewers, as it has 1.8 billion monthly active users watching videos. Even if everyone in the U.S. watches YouTube, there'd still be bout 1.5 billion international users. By comparison, Netflix has about 139 million paid subscribers -- 81 million international, 58 million domestic. That's an indication that Netflix may have greater revenue growth potential as it's able to increase penetration in international markets.

That said, there's not much publicly available data on global video platforms. Amazon Prime Video is offered globally, but Amazon is extremely tight-lipped about all of its financial metrics. Other prominent video platforms are either restricted geographically, or otherwise don't report financials publicly.

Needham points out Netflix's enterprise value-to-revenue ratio of 10 would give YouTube a value of $140 billion by her estimate. That's about one-fifth of Alphabet's enterprise value. It also represents an 85x return on the $1.65 billion price Google paid for the video streaming service in 2006.

The case that YouTube is worth even more inside Alphabet

Martin also suggests that Alphabet could create shareholder value by spinning off assets like YouTube or the company's cloud computing business. She suggests it would enable investors to buy shares of companies in certain segments instead of forcing them to buy one massive undervalued conglomerate.

But spinning off YouTube or Google Cloud could have negative long-term impacts for the companies inside Alphabet. YouTube ads benefit from access to users' entire histories with Google. While YouTube could still gain access to Google's ad targeting, the economics would change to look more like a Google Network site instead of a Google property. That would instantly decrease the value of YouTube as a stand-alone company.

Likewise, YouTube benefits from sister company Google Cloud and vice versa. If the two companies split off the mothership, Google Cloud could end up losing a massive customer in YouTube. That's a big reason why Amazon's management says it won't be spinning off Amazon Web Services -- it's its own biggest customer.

Even if a spinoff could provide a short-term increase in value across the board, the intertwine nature of Google's businesses means long-term value is best sustained by keeping everything in place. It also means that growth in YouTube also supports growth in Google's other businesses, so comparing it side-by-side with a stand-alone video streaming service's value doesn't capture the entire value of YouTube to Alphabet.