While Facebook is adding users at a respectable 13% year over year, YouTube just increased its user count 20% in about 10 months. It last reported 1.5 billion users last summer, putting its annual growth rate nearly twice as fast as Facebook's. That's absolutely astonishing considering the size of YouTube and the fact that Facebook (and other big names) are spending heavily on digital video content. 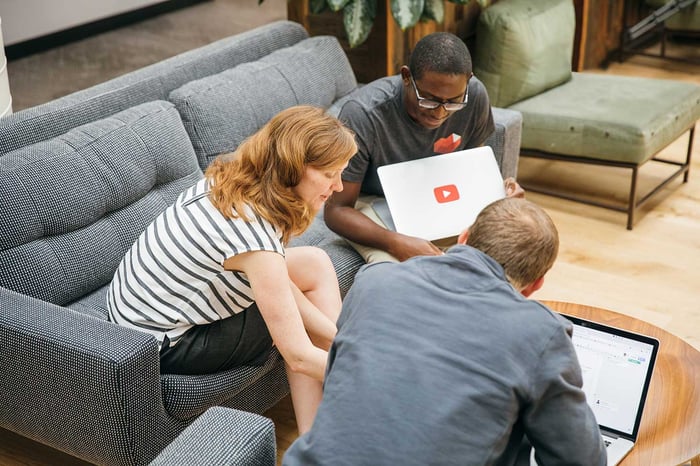 A huge business for Alphabet

YouTube is a subsidiary of Google, itself a subsidiary of Alphabet (NASDAQ:GOOG) (NASDAQ:GOOGL). You would think that, as a business so far removed from the mothership, YouTube is still just a small revenue source for the company that brought in $117 billion in revenue over the last 12 months.  But YouTube could generate $15 billion in revenue this year, according to R.W. Baird analyst Colin Sebastian. That's about 11% of analysts' consensus revenue estimate for the year.

With 1.8 billion users, $15 billion is just $8.33 per user. Now, Google takes just 45% of the gross revenue generated on YouTube, sharing the other 55% with content creators. So the per-user figure is actually $18.51. Still, that falls short of Facebook's average revenue per user of $21.15 over the trailing 12 months.

What's more, YouTube viewers are increasingly watching on a TV set. Users combine to stream 150 million hours per day on TVs. That can make YouTube extremely attractive for television advertisers as they shift more of their budgets to digital.

A growth driver for Google

Alphabet grew revenue 26% year over year in the first quarter, its highest rate since 2014. It's spending heavily to grow, primarily on cloud computing and its hardware business, but YouTube is also receiving some big investments.

The company launched several original productions last year, which have collectively garnered over 700 million views. While it's well short of the 5 billion views the "Despacito" music video (the most watched video on the platform ever) has racked up, it's enough for YouTube to double down on originals, renewing three of the seven series it green-lit last year and launching another round.

YouTube is also investing in YouTube TV, its streaming linear-TV service. The service has about 300,000 subscribers, and it recently added Turner networks and raised the subscription price.

The investments appear to be paying off: YouTube's user base is climbing twice as fast as Facebook's, and there's a clear impact on Google properties advertising revenue. Google properties revenue grew faster than Alphabet's consolidated revenue in the first quarter even though the segment is the largest contributor to the top line. Investors also saw a continued decline in average cost-per-click, indicating an outsize contribution from YouTube, where average ad prices are lower than the direct-response ads on Google Search.

The continued growth of YouTube's user base even at its current size is a great sign for Alphabet investors that there's still plenty of room for the company's biggest source of revenue to keep getting even bigger.