Even after soaring 46.7% in January following its release of select preliminary fourth-quarter results, shares of Roku (ROKU -4.02%) popped another 47.5% in February, according to data from S&P Global Market Intelligence, as Wall Street celebrated the implications of its actual quarterly report and strong forward guidance.

To be fair, in January, Roku "only" revealed that its number of active accounts had risen 40%, to 27.1 million, helping quarterly streaming hours rise 68%, to 7.3 billion. But shares soared more than 20% on Feb. 22, 2019 alone when the company confirmed its quarterly revenue climbed 46% year over year, to $276 million, translating to adjusted earnings of $6.8 million, or $0.05 per share. Both the top and bottom lines arrived well above analysts' consensus estimates for earnings of $0.03 per share on revenue of $262 million. 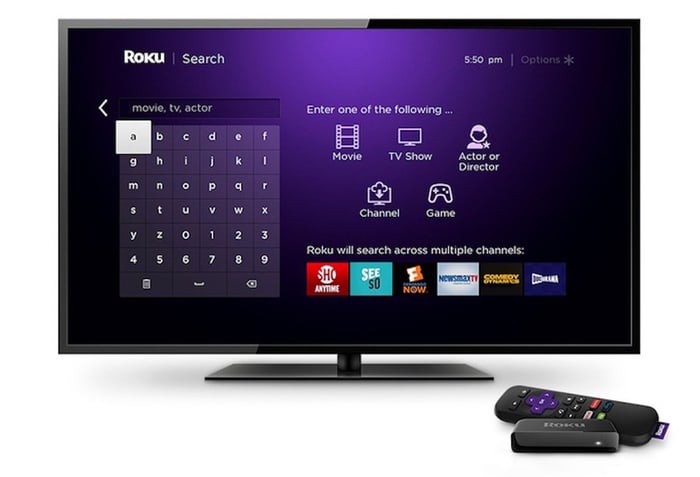 The underlying drivers of Roku's business were just as encouraging. In addition to its growth in active accounts and streaming hours, average revenue per user more than quadrupled, to $17.95 on a trailing-12-month basis. Roku's monetized video ad impressions also more than doubled in 2018, and the company noted that over 1 in 4 smart TVs sold in the U.S. last year were enabled with its namesake technology.

What's more, Roku is targeting $1 billion in revenue for full-year 2019, up 36% from 2018, which should translate to a roughly break-even year for adjusted EBITDA as the company invests to drive top-line growth and take market share in these early stages.

"We believe our competitive strengths -- namely our large and engaged user base, purpose-built OS for TV, powerful data and analytics, neutral position, and
exceptionally talented team -- will continue to propel our business for years to come," added Roku founder and CEO, Anthony Wood.

In the end, while it would be hard to blame investors for thinking Roku's meteoric rise is overdone, we should keep in mind that the last two months' pop merely brings it back to where it traded in October 2018 -- before Wall Street's overly optimistic models hit the stock hard despite a solid quarterly report in November. As long as Roku continues to improve monetization as its streaming platform permeates the industry, I think the stock has plenty of room to rise going forward.