The smart home has been a dream of technology buffs for a decade or more, but our hopes really increased around 2014, when Apple (NASDAQ:AAPL) introduced HomeKit, and Amazon's (NASDAQ:AMZN) Alexa platform really started taking off. Five years later, Alexa is more widespread, with over 100 million devices sold, but HomeKit has barely scratched the surface of its potential.

That may finally be changing in 2019, as Apple opens its arms to partners in the technology industry who want to integrate with Apple HomeKit and the Home app on nearly 1 billion smartphones around the world. Finally, Apple's smart home may be a reality. 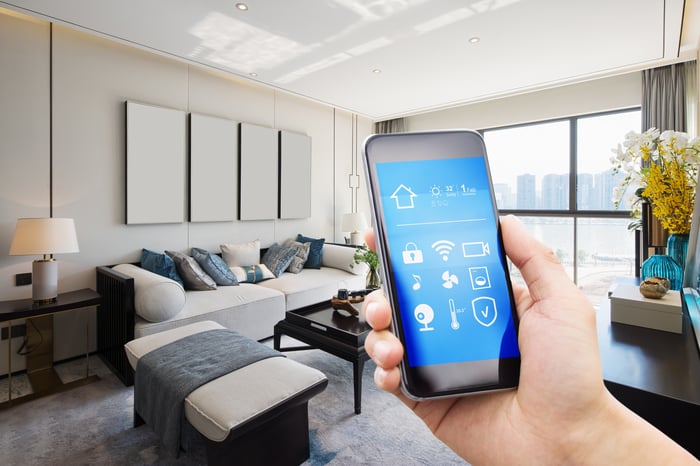 One of the great challenges for Apple in the home space was that it needed to find a way to interface with hundreds of third-party suppliers that would make HomeKit-compatible products. The company isn't used to giving away control of its user experience, and made it so hard to incorporate HomeKit that most manufacturers didn't use the system at all.

What seems to have caused Apple to finally open up to partners was the utter flop of the HomePod, the "smart" speaker that was supposed to be the hub a smart home could be built around. The product has been a disaster by almost any measure, and Apple simply wasn't able to keep up with the race to the (price) bottom for smart speakers.

Meanwhile, Alexa began popping up on thermostats and even TVs around the world. Alphabet's (NASDAQ:GOOG) (NASDAQ:GOOGL) Google Assistant also increased in popularity with third-party devices. Apple had to do something or it would lose the smart-home market, not to mention fall behind in virtual assistants like Siri.

Partners come along for the ride

Apple is finally starting to open up its connections to smart devices. iTunes and Apple AirPlay 2 will be included on 2019 LG, Sony, Vizio, and Samsung TVs, a big step to unlocking iTunes content. Connecting more TVs is only part of the strategy -- General Electric, Belkin, Arlo, and more are announcing HomeKit integration, bringing more lighting and camera products into the HomeKit fold.

Apple's advantage in the smart-home market is its proximity to users. It knows where you're located, and can turn on lights or change the temperature of your house based on that -- and it has a microphone in your pocket at all times. That's an advantage over Alexa, which needs to be in the room when you're trying to talk to it.

If Apple can convince more partners to make products for HomeKit, it could take back some of the smart-home market from Amazon and Google.

Home intelligence will grow in importance

Smart devices are just starting to become common household purchases. Not only are smart thermostats becoming more widely used, but as new-energy assets like solar-energy systems, energy storage, and electric-vehicle charging that require dynamic control become more commonplace, it'll be important for Apple to play a role in the smart-home ecosystem.

To make any meaningful inroads in the smart home, Apple needed to open up its platform to third-party developers. It's starting to do that with iTunes on other manufacturers' devices, and HomeKit is now easier to integrate with. That should help the company play a bigger role in the smart home, which will further engrain its devices into consumers' everyday usage.