Peter Lynch is undoubtedly one of the world's most savvy investors. From 1977 to 1990, he led the Fidelity Magellan Fund to average annual returns of 29.2%, beating the market in 11 out of the 13 years. That record gave the fund the best 20-year record of any mutual fund in history, a result of a portfolio of high-growth stocks that trounced the market.

Lynch loved consumer trends, and this company is at the forefront of fintech

Matt Frankel, CFP (Square): In his famous book, One Up on Wall Street, Peter Lynch advised everyday investors to use their powers of recognizing consumer trends to gain an advantage over institutional investors.

Square is an excellent example of how spotting consumer trends can pay off. A couple of years ago, I noticed more and more of those little credit card readers sticking out of vendors' iPhones at my local craft market and decided to buy some shares of the (then under the radar) company that made them.

Fast-forward a few years, and everyone knows what Square is. But I still don't feel like the market fully appreciates the long-term potential of Square's ecosystem.

Here's why I think the stock still has tremendous potential. Square's Cash App more than doubled its active user base over the past year to 15 million people. And for the most part, Square has yet to monetize this part of its ecosystem. In fact, thanks to some of the incentives the company offers through the platform, it's probably a money loser right now.

However, Square has made it clear that it wants to ultimately become a one-stop shop for customers' financial services needs, having mentioned things like interest-bearing deposit accounts, investment products, and consumer loans, to name a few. And Square is building a massive and rapidly growing group of customers that it can eventually market these products to. Let's say that the average active user of Square Cash eventually contributes $100 in annual revenue for the company (which I feel is conservative) by using several different banking products. This would mean that Square could generate $1.5 billion annually from the consumer side of its business. And this doesn't even take future growth of its user base into consideration.

The bottom line is that Square's growth story is far from over. I haven't sold a single share of my original investment, and plan to gradually add to it.

Check out the latest earnings call transcript for Square, Southwest Airlines, and Visa. 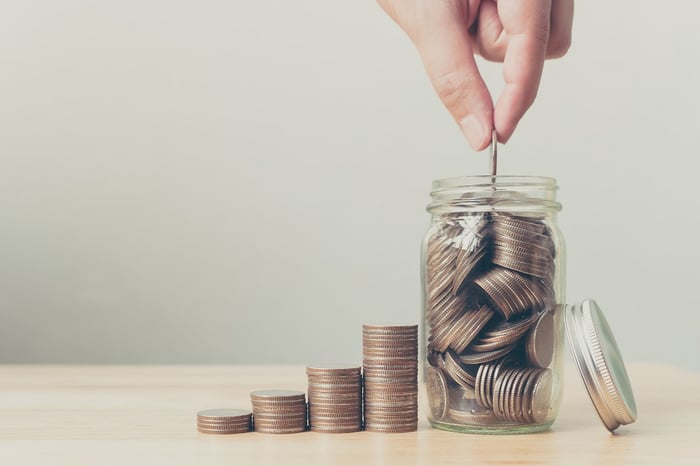 Here's a company Lynch would LUV

Dan Caplinger (Southwest Airlines): Peter Lynch was a big proponent of buying what you know, and as an air traveler, I've spent plenty of time on Southwest Airlines planes. The Texas-based airline has built up a reputation for strong customer service, cost-conscious pricing, and no-nonsense business practices for decades. And it also has a longer history of profitability than just about any other major player in the industry. During an era in which most of its rivals have resorted to bankruptcy protection at least once, Southwest has avoided that fate and demonstrated the fiscal responsibility to keep its shareholders happy.

That's not to say that Southwest has stayed the same over the years. The airline has made ambitious efforts to grow, expanding its route map into Mexico, the Caribbean, Central America, and most recently Hawaii. Yet policies like no fees for checked baggage and no reserved seating have defied the rest of the industry, building up a loyal customer base and helping the airline keep its fares low.

Some worry that Southwest might be losing its way. Recent mechanical difficulties and strained labor relations have been out of character for the airline, and high-profile incidents involving Southwest aircraft have cast a shadow on the company. Yet as Lynch would remind us, owning shares is owning a piece of a business, and despite short-term headwinds, Southwest has demonstrated again and again an ability to get past tough times and keep flying higher over the long run.

Jordan Wathen (Visa): Peter Lynch was an extraordinary growth investor who built his record by being willing and able to pay a high multiple for a company with a long runway for growth. Visa seems like almost the perfect match for his style of investing.

Visa provides the architecture on which payments travel. It connects millions of businesses and financial institutions to one another, and helps money travel seamlessly with just the swipe or dip of a credit or debit card. Every time a Visa card is used to make a purchase, the company takes very small fees -- tolls, in essence -- for sending the payment through its network.

Shares of Visa rarely look cheap. Right now, they trade at about 27 times free cash flow in 2018. But Visa has been a market-beating stock for years, despite the fact it always trades at high multiples, because of the business' impressive growth. In the most-recent quarter, the company reported that payments volume on its network increased 11% year over year, adjusted for currency impacts, driven by a 9% increase in credit card payments and a 13% increase in debit payments.

In developed markets like the United States, payments growth is largely driven by slow growth in the economy and a shift toward online shopping, where cards are used for a greater share of purchases. In emerging markets, the shift from cash to cards is only just beginning, helping Visa score outsized growth as consumers replace cash with debit and credit cards.

But the best part of Visa is that its growth doesn't restrict it from rewarding shareholders in the present. A capital-light business, Visa can afford to pay out the majority of its free cash flow in dividends and share repurchases, which magnifies shareholder returns over time.

5 Stocks Warren Buffett Has Sold in 2020

How Will Buffett Steer Through the Airline Crisis?