Please ensure Javascript is enabled for purposes of website accessibility
Log In Help Join The Motley Fool
Free Article Join Over 1 Million Premium Members And Get More In-Depth Stock Guidance and Research
By Dan Caplinger – Updated Apr 11, 2019 at 11:48AM

These companies have ruled the past decade.

Investors are celebrating the 10th anniversary of the beginning of the bull market in stocks, and a lot has happened in the past 10 years. Back in 2009, many feared that the stock market was going through a Depression-like crash. When the Dow Jones Industrials (^DJI -1.71%) fell below the 7,000 mark, concerns about the tenuous state of the financial system and recessionary economic conditions weighed heavily on investor sentiment.

Fast-forward to 2019, and investors who stayed the course have seen huge gains. The Dow is back above 25,000, and many of its 30 components have seen even stronger returns. When you look at which stocks have pulled the most weight during the bull market, three stand out: Boeing (BA -3.39%), Apple (AAPL -3.00%), and UnitedHealth Group (UNH -0.74%). Although only one of those stocks has been in the Dow for the full decade, they've each made key contributions to the success of the overall market over that time.

Check out the latest earnings call transcripts for Boeing, Apple, and UnitedHealth Group.

You could hardly expect to see a more diverse group of three stocks leading the Dow higher over the past 10 years than this list. Despite all qualifying as "industrials" for purposes of being in the Dow, these three companies are in very different areas of the economy. The fact that they've all managed to excel shows just how powerful and broad-based the bull market since 2009 has truly been.

Boeing is the only stock to have been in the Dow at the time of the 2009 market low, and the change in its fundamental business over 10 years completely matches up with its share-price gains. Boeing's ascent started from extremely low levels, as investors back then had to deal with the fact that the aircraft manufacturer's business had almost come to a standstill. In 2009, Boeing saw aircraft orders come in 90% lower than they had just two years before, and many investors seemed to think that the aerospace giant's plans to come out with new and updated models had come at exactly the wrong time in the economic cycle. 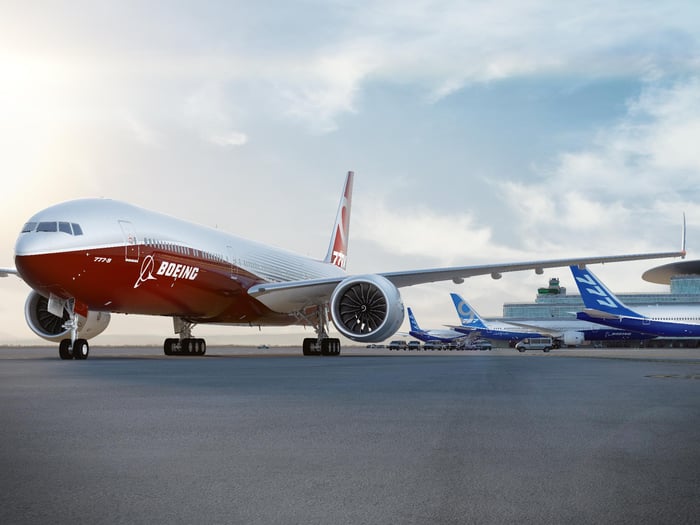 Yet Boeing persevered, and even at the time, executives were optimistic that the tide would turn quickly. What seemed like an impossibly rosy scenario actually played out even better than expected, as airlines found ways to become consistently profitable and took the opportunity to modernize their fleets to reap efficiency gains and match up capacity with their passenger demand. Boeing has also made key strategic moves to bolster its own capacity to produce parts and components, vertically integrating its operations to avoid overreliance on outside suppliers. Even after its impressive share-price surge, Boeing's business is still strong, and many remain optimistic about the stock's prospects.

Apple and UnitedHealth Group are later entrants to the Dow, with the healthcare giant making the grade in 2012 and the iPhone maker joining the list in 2015. In many ways, Apple doesn't really deserve much credit for the Dow's gains because the stock's return has amounted to less than 50% over the four years since it joined the Dow.

The tech giant's contribution to the bull market was much greater just a few months ago, but recent concerns about the prospects for future growth at Apple dealt a huge blow to shareholders late last year. Until Apple can reassure investors that it can pivot from its past successes and find new products to attract new customers and satisfy existing ones, the stock's influence might well remain muted.

Even though UnitedHealth has had only 6 1/2 years to contribute to the Dow's performance, it's done a much better job, climbing 371% over that time frame. The job that UnitedHealth did is even more praiseworthy when you consider that the passage of Obamacare in 2010 made transformative changes to the way that Americans get their health insurance coverage, and that forced health insurers like UnitedHealth to change the way they attacked the market while still holding onto their reputations among policyholders and maintaining disciplined underwriting practices.

UnitedHealth handled Obamacare's rollout well, getting exposure but not overcommitting to a market that in hindsight has had to deal with huge political obstacles. At the same time, moves into wellness and pharmacy benefit management services have gone well, and UnitedHealth's fledgling moves to go global are showing signs of promise, as well.

Keep your eyes on these stocks over the next 10 years

Many believe that the 10-year-old bull market is at an end, but that doesn't mean that these three stocks are doomed to give up their gains. Boeing, Apple, and UnitedHealth could easily have further to climb in the years to come -- regardless of whether the bull defies skeptics or gives way to a bear market in the near future.