Investors are betting on Netson Peltz's ability to play "Let's Make a Deal" for Aurora Cannabis.

After several days of mostly flat trading, shares of marijuana stock Aurora Cannabis (ACB -6.20%) finally got the lift they were looking for today.

Yesterday, news that the company has struck a deal to sell cannabis oils to German pharmacies barely budged Aurora's stock. Today, however, Aurora announced it has appointed activist investor Nelson Peltz to be its "Strategic Advisor" -- and shares are up more than 10% in early trading. 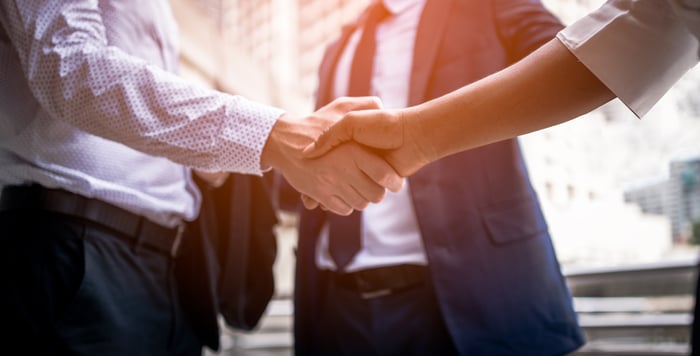 In today's press release, Aurora describes Peltz's role as working "collaboratively and strategically to explore potential partnerships that would be the optimal strategic fit for successful entry into each of Aurora's contemplated market segments. Mr. Peltz will also advise on the Company's global expansion strategy."

Aurora CEO Terry Booth notes that Peltz has a demonstrated track record of being able "to generate accelerated, profitable growth and shareholder value across many industry verticals." Coming off a quarter in which the company reported a loss of 0.25 Canadian dollars per share, the prospect of Peltz helping return it to profitability has to sound pretty attractive to investors.

Right now, most analysts polled by S&P Global Market Intelligence fear Aurora will lose money this year, but may break even next year and turn a profit by 2021. Investors' hope is that Peltz's appointment will help accelerate that timeline.

In this same press release, Peltz laid out his own plans for Aurora's development:

I believe Aurora has a solid execution track record, is strongly differentiated from its peers, has achieved integration throughout the value chain and is poised to go to the next level across a range of industry verticals. I also believe that Canadian licensed producers, and Aurora in particular, are well positioned to lead in the development of the international cannabis industry as regulations evolve, with a strong, globally replicable operating model. I look forward to working with Terry and the extended Aurora team to evaluate its many operational and strategic opportunities, including potential engagement with mature players in consumer and other market segments.

Now let's unpack that statement, why don't we?

While understandably vague on the details on the first day of his new job, Peltz dropped several hints as to his thinking about where Aurora goes from here. Currently reliant on medical cannabis sales, the company is eyeing the recreational market as well, and hoping to earn even fatter profit margins on marijuana extracts and pot "alternatives" (such as vapable cannabidiol). To this end, Aurora is aiming to quadruple its marijuana production from a current run rate of 120,000 kilograms per year to as much as 500,000 kilograms -- or as fellow Fool.com contributor Sean Williams estimates, perhaps as much as 700,000 kilograms annually.

To consume that much supply, Peltz will be looking for forge partnerships in "a range" of industries. He will be looking to take Aurora's business "international." (The company does do business abroad already, but according to S&P Global figures, 87% of the company's sales still come from Canada alone.) And while looking at many market segments, the one Peltz highlights in particular is "consumer" goods.

This argues strongly in favor of Peltz working to strike a deal with a major consumer goods manufacturer -- perhaps something along the lines of Constellation Brands' tie-up with Canopy Growth, or Cronos Group's alliance with Altria. Such a deal already looked logical if Aurora wants to keep up with the Joneses (so to speak). But Peltz's addition to Aurora's deal-making team makes it even more likely.

How Wall Street is reacting

So seems to be the thinking at Toronto-based boutique investment banker GMP Securities. TheFly.com reports that GMP has upgraded Aurora Cannabis stock from hold to buy in response to the Peltz news.

GMP argues that Peltz could be "instrumental" to Aurora striking deals with large consumer packaged goods companies, raising the possibility that Aurora won't just match Canopy's and Cronos' accomplishments, but potentially take the lead in forging alliances with multiple partners. The analyst also refers back to last month's announcement that Health Canada has licensed the company's Aurora Sky and Bradford facilities to produce and sell cannabis and cannabis derivative products as evidence it will have enough supply on hand to satisfy demand from its (future) partners.

All of which, argues GMP, should make Aurora Cannabis stock worth $15 within a year.

Now, it remains an open question whether the hiring of Peltz and a reference back to a news item from last month suffice to make Aurora Cannabis worth 10% more today than what it was selling for 24 hours ago -- much less whether these two items can combine to grow Aurora Cannabis stock 68% more over the course of the next year.

Bear in mind that Aurora is not profitable, that it burned through $423 million in negative free cash flow over the past 12 months, and this $8 billion dollar company sold less than $90 million worth of marijuana last year.

I personally have my doubts that any company, no matter how fast it's growing or who it has advising it, should sell for 90 times annual sales, as Aurora Cannabis stock currently does. Luckily for Aurora Cannabis investors, though, my view is in the minority today.