Shares of the jeans-maker are set to hit the public markets again, but investors should consider a few key issues before diving in.

Levi Strauss isn't going to be your typical IPO.

Unlike the fast-growing tech companies and other "unicorns" dotting the IPO landscape this year, Levi's is an age-old timeless brand. The company dates back to the days of the San Francisco gold rush, founded in 1853, and claims to have invented the blue jean.

As you might expect from a 166-year-old company going public, Levi's has a history that's been rocky at times. The company had its first IPO in 1971, but profits declined as a public company, and the descendants of Levi Strauss took the brand private in 1984 for $1.7 billion. In its 2019 IPO, the company is seeking a valuation around $6 billion, and existing shareholders will sell close to $600 million, yielding around $106 million in direct proceeds to the company.

After seeing slow sales growth earlier in the decade, Levi's has seen its growth improve lately, with revenue rising 14% last year and operating income increasing 15%. Increased spending on marketing, opening new stores, and apparent secular growth in denim drove the strong performance in 2018. CEO Chip Bergh, who came to the company in 2011 from Procter & Gamble, has helped drive a resurgence in the business.

Beyond the headline numbers, there are some key questions prospective investors should be asking before suiting up with Levi's. 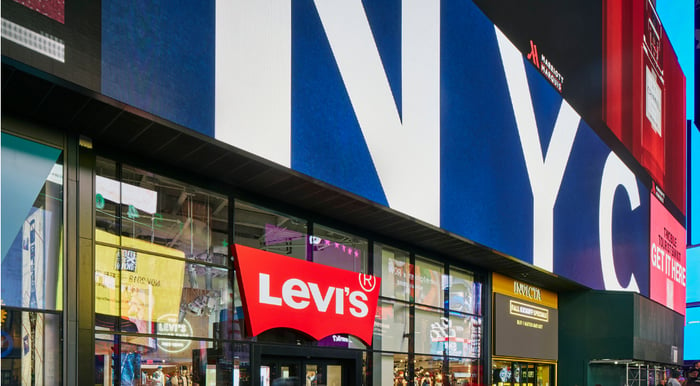 1. What's the strategy for thriving in today's retail market?

It's no secret that the retail industry has been challenged in recent years. The rise of e-commerce has threatened the sector's traditional leaders and changed the way people shop. In particular, many mall-based retailers and department stores have been forced into decline, closing stores and even going bankrupt, as mall traffic is falling and the traditional role that department stores filled as a one-stop shop is no longer necessary when everything is available online. Meanwhile, fast-fashion purveyors that make their own clothes, like H&M, and off-price stores known for deep discounts, like T.J. Maxx, have emerged as the biggest growth channels in apparel retail.

Though Levi's has been growing its direct-to-consumer channel, both by opening new stores and through e-commerce, a majority of the company's sales -- 57% not including franchise stores -- still come through the wholesale channel. Levi's noted that no single customer makes up more than 10% of sales, though many of its biggest customers would appear to be to the struggling mall-based retailers and department stores. Levi's said it was focused on growing premium accounts with names like Nordstrom and Bloomingdale's, which is owned by Macy's, but even those retailers have generally seen flat sales growth recently.

Levi's added 74 company-operated stores last year, indicating confidence in its own retail strategy, but its direct e-commerce business is still small, making up just 4% of total revenue. According to SimilarWeb, a Web analytics firm, traffic to Levi.com actually fell last year from a monthly average of 3.62 million visits to 3.13 million, which seems to indicate that the company is struggling to gain traction as an online retailer.  Even if the company is successful at driving direct-to-consumer growth, it will still have to overcome store closures and other such challenges at its retail partners.

2. How will the company contend with changing fashion trends?

Jeans brands and denim in general have struggled this decade as the rise of "athleisure" has taken market share away from jeans, a classic casual style. Technical fabrics made by companies like lululemon athletica (LULU 2.58%) have grabbed the spotlight and delivered consistent growth, and Lululemon is now one of the most valuable apparel retailers in the U.S., with a market cap of $19 billion.

However, there are a number of signs that the trend is easing, as retailers including Levi's, Gap (GPS 3.99%), Ralph Lauren (RL 0.29%), Madewell, and Calvin Klein have all noted rising denim sales lately, and many have committed to devoting more resources to the category.

Still, even if denim does make a full-fledged comeback, fashion is fickle and Levi's will need more than just jeans to deliver long-term growth for investors. The company has focused on growing sales tops, which have increased their share of revenue from 11% in 2015 to 20% last year, and it's also grown the share of women's items from 20% to 29% during that time by relaunching women's jeans in a number of different silhouettes and with four-way stretch fabric made in its Eureka Innovation Lab. Importantly, the Eureka lab is key in helping the company develop technical fabrics and keep up with, or stay ahead of, changing trends in the industry as consumer expectations and standards have evolved.

With the company seeking a market value around $6 billion, Levi's would trade at a P/E ratio of 21 based on last year's net income of $285.2 million. While that seems like a reasonable valuation for a company that just delivered 14% revenue growth and similar growth in operating income, that valuation would make Levi's more expensive than most retailers, especially its closest competitors.

Gap trades at a P/E of 10. Ralph Lauren is valued at 17; PVH, the parent of Calvin Klein, trades at 12. VF, which owns Wrangler and Lee and has a similar business model to Levi's, has a P/E of 22, but that seems to be driven by the strong growth at Vans, the skate-shoe brand.

Considering the market's relative skepticism about retail these days, the proposed valuation for Levi's seems to indicate that management expects its recent growth rate to continue. That may not be so easy in today's market, however, considering the struggles at some of its retail partners, changing fashion tastes, and the growth of athleisure, among other challenges.

Levi's has had an impressive comeback recently, but it remains to be seen if the company's turnaround is as durable as its trademark jeans.