Please ensure Javascript is enabled for purposes of website accessibility
Log In Help Join The Motley Fool
Free Article Join Over 1 Million Premium Members And Get More In-Depth Stock Guidance and Research
By Jason Hall - Updated Apr 13, 2019 at 11:20AM

Double-digit volume growth to end 2018 and a cleaned-up balance sheet have investors reinvigorated over the company's prospects.

Clean Energy Fuels (CLNE 0.00%) reported fourth-quarter and full-year 2018 results after market close on March 12, and Mr. Market was very pleased. Shares surged more than 20% at the open on March 13, and finished the first trading day after earnings up almost 30%. Whew!

The main catalysts behind the big earnings surge were a beat versus analyst expectations for revenue and earnings, along with strong guidance that suggests the company is returning to growth after a relatively lackluster 2018 that saw fuel volumes grow only 4% for the full year. 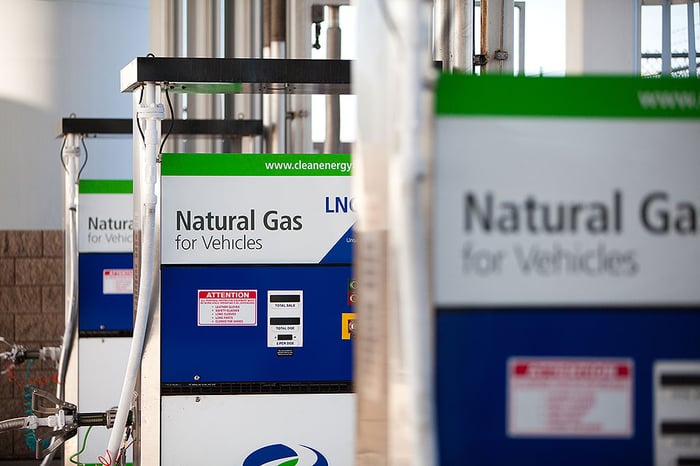 How Clean Energy's results stacked up

Here's how the same metrics looked over the full year:

On an operating cash flow basis, Clean Energy made sizable improvements in 2018 versus 2017, when a substantial amount of the cash it generated was produced from a deal to sell BP its upstream production assets.

How did Clean Energy make this sharp turn from burning through cash to generating positive operating cash flow and free cash flow? In short, by steadily chipping away at its expenses -- not only operational costs like selling, general, and administrative (SG&A) expenses, but also by paying down debt and substantially reducing its interest costs.

That's a huge 31% reduction since 2016, in what had become two onerously expensive line items for the company. And it's almost the entire reason the company can now generate positive cash flows.

Let's take another look at the key growth metric for Clean Energy Fuels: fuel volume delivered. For much of 2018, fuel volume growth slowed significantly, and for multiple reasons, including the sale of its upstream RNG production business to BP, which reduced volumes it was selling to non-transportation customers.

But even adjusting for these non-transportation sales, Clean Energy only grew core fuel-volume sales in the mid single digits for most of 2018. However, this metric surged a very strong 14% year over year in the fourth quarter.

What makes this most notable is the nature of Clean Energy's business. Unlike an equipment seller, which can see sales surge up or down sharply from one period to the next, Clean Energy Fuels' core refueling business is built on recurring sales. As fleet operators bring natural gas vehicles into operation, they will generate steady fuel volume sales for the company for the life of that vehicle, which can exceed five years in many instances.

Volumes for Redeem, the company's brand name for renewable natural gas (sourced from biomass), grew 40% in 2018 and now make up 27% of fuel sales, and are expected to be the primary source of future growth. The company regularly touts the fact that Redeem, burned in the latest-generation engines, results in lower total carbon emissions than a similar electric vehicle powered from the utility grid. Furthermore, electric vehicles are very limited in application, while natural gas vehicles are able today to meet essentially every transportation application, and at lower costs than electric vehicles.

And that growth should be profitable

Since that incremental volume will come from the same operating expenses and lower interest expenses than 2018, nearly all that incremental profit will fall to the bottom line. Added together, management expects to generate adjusted EBITDA of $50 million to $55 million in 2019.

One big caveat remains for the company this year: The Alternative Fuels Tax Credit (AFTC) expired at the end of 2018 and hasn't yet been renewed for 2019. There is significant bipartisan support for this tax credit, which has been implemented either in advance or retroactively every year for the past decade. But since it's not in place now, management gave two separate guidance numbers for GAAP earnings.

Without the benefit of the AFTC, Clean Energy says it will report a GAAP net loss between $12 million and $18 million in 2019. However, the AFTC is almost assuredly going to be reinstated for 2019, and would put $25 million or more directly on the company's bottom line.

Most important of all, Clean Energy is set to generate substantial positive cash flows, and as Vreeland pointed out, those cash flows would exceed the company's capital growth spending, too.

Clean Energy Fuels has finally realized the benefits of its debt- and cost-cutting initiatives, as its expected cash production in 2019 demonstrates. At the same time, management is confident that it will continue to deliver growth, on the strength of its Redeem renewable natural gas offering.

The past few years no doubt have been painful. But with a strong balance sheet and expectations for double-digit volume growth that won't require higher operating expenses, the company looks well positioned for a great 2019.