The effects of that decision may last longer than previously expected.

Shares of Dick's Sporting Goods (DKS 1.24%) fell after the outdoor gear retailer's fiscal 2018 fourth-quarter earnings report was as bad as expected. The stock plunged 11% on the day of the report.

The impact of its decision to ban the sale of certain rifles and restrict access to other firearms continues to reverberate throughout the chain as sales and profits shrank once again. Since its controversial actions one year ago, Dick's witnessed $154 million in sales and $51 million in gross profit evaporate.

Firearms carry low margins, but they generate store traffic and gun buyers purchase other gear to go with them. By angering this one group of consumers, Dick's has hurt other aspects of its business. Now the retailer is trying to build up other aspects of its operations to compensate for the shortfall and is hoping that having largely lapped the impact of its gun ban, its business will look comparatively better going forward. 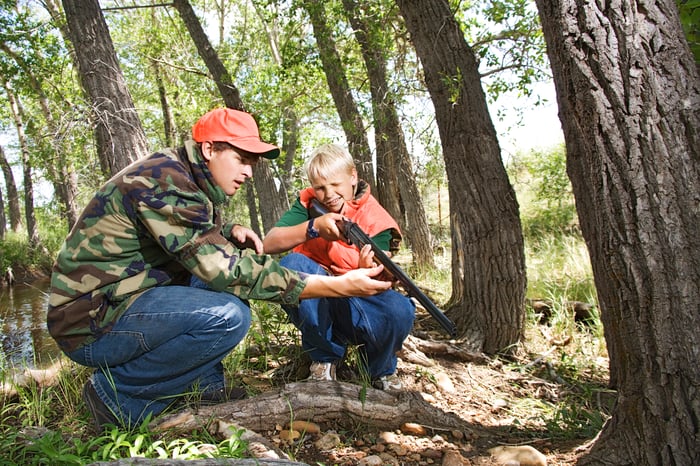 Falling sales and profits, plus a weak outlook

Dick's said fourth-quarter revenue fell 6.5%, but because fiscal 2017 had an extra selling week, adjusted revenue was actually down only 3.7%. Same-store sales were also down 3.7%, or 2.2% on an adjusted basis.

The retailer said net income was similarly hurt by the calendar shift, but margins continued to contract regardless. It reported net profits of $102.6 million, or $1.07 per share, compared to $116 million, or $1.11 per share last year. However, after adjusting for the extra week, last year's earnings were $1.22 per share.

Despite the shortcomings, though, Dick's actually performed better than what Wall Street was expecting, but that wasn't enough to make up for its weak guidance. Dick's expects full-year 2019 earnings to be in a range of $3.15 per share to $3.35 per share, the midpoint of which -- $3.25 per share -- is almost 4% below analyst expectations of $3.38 per share. It would, however, beat this year's full-year earnings by $0.01.

Comparable sales, however, aren't expected to start turning around till the second quarter and will be rather weak for the year: Dick's forecast them to be flat to up 2%. Considering the company has a relatively low bar to step over because of the hole comps were in throughout 2018, it indicates the sporting goods retailer's recovery may be a bit muted.

Even so, Chairman and CEO Ed Stack said in a statement he was happy with how Dick's Sporting Goods performed for the quarter, noting in its core business it experienced "comp sales gains across key categories and double digit percentage increases in eCommerce and private brand sales."

Dick's continues to downplay firearms, and announced it will be removing the hunt department from 125 more stores. Because the 10 locations it tested the category removal in experienced an increase in comps, it is greatly expanding the elimination process. Depending on how these stores perform, it may remove the department from another subset of its 729 stores.

In its place, Dick's plans on adding new gear, such as baseball equipment, licensed products, and outerwear, to make up the difference. Store-label brands, such as Calia and the recently introduced Alpine Design, have gained some traction, with comps up by low single digits.

A slow process to get back on track

Although the gun actions have hurt Dick's business, investors have largely ignored the moves, always believing they would be temporary in nature. Even though the retailer's stock tumbled on the latest earnings report, shares still trade 17% higher than they did a year ago.

However, Dick's outlook is suggesting not even lapping the controversy will cause a growth spurt, and that indicates the reach of gun buyers may extend further than maybe management or the market thought.