Digital sales are the new normal, and Etsy, Wayfair, and Stitch Fix are beating Amazon at its own game.

When it comes to e-commerce, Amazon.com (AMZN -8.43%) dominates the discussion. The company reportedly accounted for as much as half of all online sales last year and was responsible for much of the growth.

In recent months, however, the digital seller has begun to feel the effects of its enormous size, and its growth has begun to slow. In its most recent quarter, Amazon's net sales grew just 20% year over year, its slowest pace since early 2015. This performance has some investors wondering if the company's best growth is in the rearview mirror.

There are three up-and-coming online retailers that are actually outpacing Amazon's growth and might be worth a look. Etsy (ETSY -0.47%), which focuses on handmade or vintage items; home goods purveyor Wayfair (W -7.70%), and online subscription and personal styling service Stitch Fix (SFIX -6.07%) are putting up more-robust sales increases.

Check out the latest earnings call transcripts for Etsy, Wayfair, and Stitch Fix. 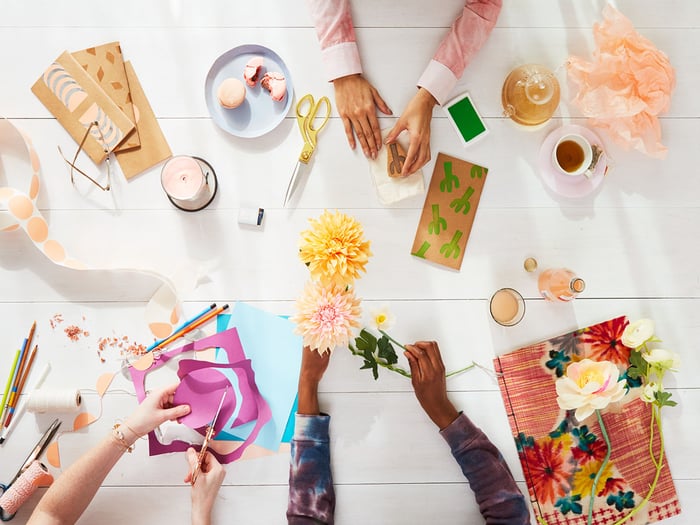 A typical "factory" for the goods found on Etsy. Image source: Etsy.

Retro and vintage items always seem to be in fashion, and Etsy has given consumers a platform for throwback, unique, and handmade goods. By connecting buyers and sellers of these products, the company has turned this niche market into a gold mine.

Its fourth-quarter results illustrate just how popular the company has become. Etsy grew gross merchandise sales (GMS) by 22% year over year to $1.2 billion, which helped revenue soar to $200 million, up 47% versus the prior-year quarter. Operating income grew at an even faster pace, up 61% year over year. User numbers continued their solid growth, with active sellers up 9% and active buyers up 18%, both year over year. The results were boosted by strong holiday sales, with the five days from Thanksgiving through Cyber Monday growing 30% from the year-ago period. A recent increase to its selling fees is also boosting results.

Etsy recently revealed a new five-year plan, and anticipates GMS to grow at 16% to 20% annually, with revenue rising even faster, and an EBITDA profit margin increasing from 23% to 30% -- or higher. 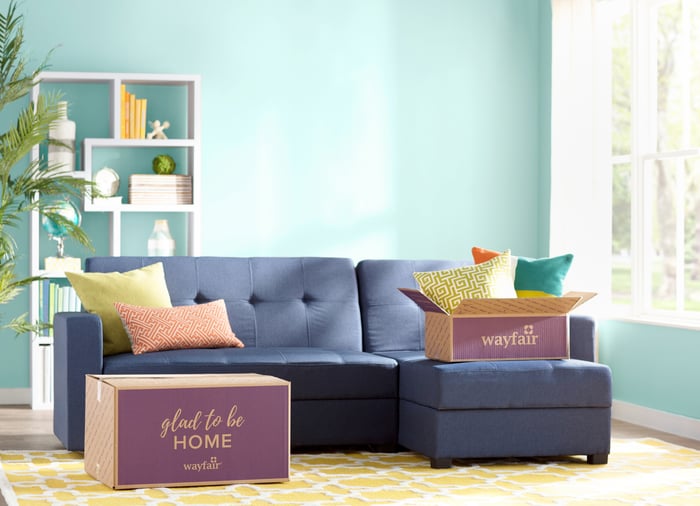 You've got just what I need

If you've ever had Wayfair's jingle running through your head, you're probably not alone. The company's slick advertising campaign has succeeded in convincing millions of consumers to try out its furniture and home goods platform, which is helping lift its sales. Wayfair has shown it has just what shareholders need as well.

Wayfair delivered the goods to end 2018, with fourth-quarter direct retail net revenue of $1.996 billion, up 41% year over year. The company continues to invest heavily in its growth, so not surprisingly, it isn't yet profitable. It generated an adjusted loss of $54 million, or about 3% of revenue. Wayfair's active customer base reached more than 15 million, up 38% compared with the year-ago period. Each customer is spending more and ordering more often. Revenue per customer in 2018 increased 5% year over year to $443 and orders per customer increased from 1.77 in 2017 to 1.85 in 2018.

The company continues to invest in its logistics, and Wayfair sees enormous opportunities internationally, particularly in Canada, the U.K., and Germany. 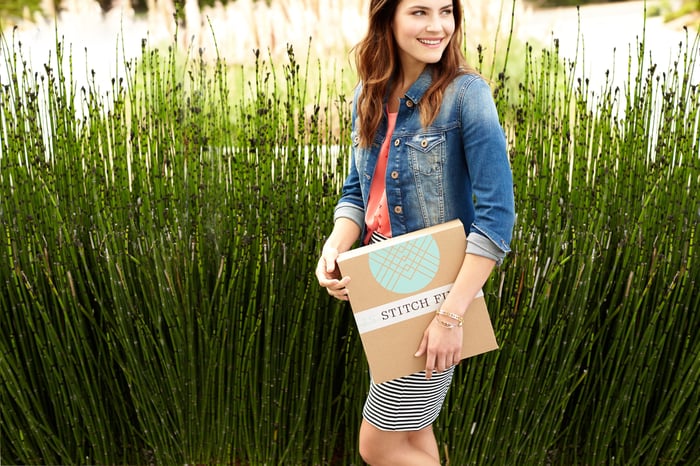 Stitch Fix is something of a battleground stock for investors. Some can't understand the concept of a subscription-based clothing service, and others are asking where it's been all their life. While not everyone will agree on the need for such a service, the numbers illustrate that Stitch Fix continues to defy detractors.

In its fiscal second quarter, the clothing purveyor generated net revenue of $370 million, up 25% year over year, surpassing expectations and marking the sixth successive quarter of growth that exceeded 20%. Earnings per share of $0.12 were more than double the $0.05 expected. There had been some concerns about slowing user growth, but Stitch Fix put those in the drawer, as active clients grew 18% year over year, coming in at 3 million. Adding to the results, existing customers were spending $463 on average, up 6% versus the prior-year quarter.

Management believes this model will travel well, and is introducing the service to customers in the U.K. in the coming months, providing another avenue for growth.

It's worth noting that strong financial performance by these companies has led to impressive stock gains as well. Shares of Etsy, Wayfair, and Stitch Fix have gained 153%, 99%, and 32%, respectively, over the past year. Investor fears about Amazon's slowing growth have hampered its stock price, which has gained just 6% in the past 12 months.

That doesn't guarantee that these outsized gains will continue. It's important to remember that with market caps of about $15 billion or less, each of these e-commerce providers will continue to be much more volatile than the broader market and could see huge moves either up or down. They also have much shorter track records than Amazon, as each has made its public debut over the past five years. For comparison, Amazon has been around since 1997.

Still, for those considering companies with a long and potentially lucrative runway in digital sales, these three online retailers are worth a look.

Wayfair Has a New Profit Outlook
413%