Do the theater company's financials support its 5% yield?

While 2018 was a record year for the domestic box office, the movie theater industry remains risky for investors. One of the big names in the space is AMC Entertainment (AMC 13.00%), the largest movie theater operator in the world.

AMC showed some better-than-expected results on its recent Q4 earnings release; however, investors remain nervous about the company's high debt levels following its acquisitions of Carmike Cinemas and Odeon in 2016 and Nordic Cinemas in 2017. AMC is also making large investments in recliner seating, which has taken up even more of its capital.

For the full-year 2018, AMC earned just $0.41 in diluted earnings per share, yet the company paid a regular annual dividend of $0.80 per share, as well as an additional $1.55 special dividend in September after receiving a $600 million convertible debt investment from Silver Lake Partners.

With a debt load now over $5.4 billion and net income not covering the current payout, how safe is AMC's dividend -- and, for that matter, the stock? 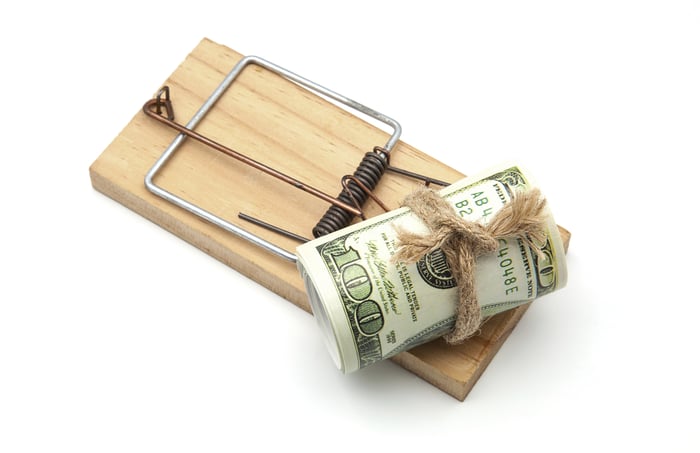 Over the course of the past few years AMC has divested many of its non-core assets, including stakes in National Cinemedia (NCMI 1.78%), Open Road films, and other smaller companies. It's also divested some theaters, and sold others in sale-and-leaseback transactions. The company basically reinvested all of these proceeds into recliner and food & beverage upgrades. Thus, AMC had more cash to spend in 2017 and 2018 than its operating earnings would indicate.

And spend it did, with a whopping $576.3 million in capital expenditures in 2018, exceeding the company's operating cash flow of $523.2 million -- though $127.6 million of that spending came from landlord contributions.

AMC's management understands all these comings and goings may be confusing, and is trying to help investors parse its business. In conjunction with its fourth-quarter release and earnings call, the company unveiled a new metric: "Adjusted free cash flow." Management defines adjusted free cash flow as (i) cash flow from operations, plus (ii) merger and acquisition expenses, less (iii) maintenance capital expenditures, less (iv) landlord contributions.

The metric thus separates AMC's core cash flow from the costs of growth initiatives, either from acquisitions, recliner upgrades, or new theaters. Basically, it's the cash flow AMC could be making if management chose to do so.

The adjusted fee cash flow number came in at $298.2 million in 2018. That does cover the regular dividend of about $82.5 million, and may give those counting on AMC's dividend, which now yields roughly 5.3%, some relief. However, there are a few outstanding issues investors still need to sort out.

The big elephant in the room is still AMC's debt load. Of the $5.4 billion total, over $1.2 billion comes due in 2022. So while AMC may be free and clear for the next three years, it will have to address those maturities.

Assuming $300 million in adjusted free cash flow per year, that only brings in $900 million by the end of 2021, although AMC does have a revolving credit facility with $211.2 million of space capacity left.

That would get AMC almost all of the way there -- but there are two problems. First, the company still pays out dividends of roughly $82 million per year to shareholders. Second, the company also intends to continue growth capex of roughly $150 million per year going forward. While growth capex won't be as large as in the past couple years, it will take up most of the extra cash.

Is management being reckless? That would be the case if the company didn't have other options, but it does. Management likely anticipates an expansion of adjusted free cash flow over time, otherwise it wouldn't be spending on pricey theater renovations. In addition, management has previously discussed a partial IPO of its European theater assets -- though since Europe had a down box office last year, CEO Adam Aron said he wants to hold off until that region improves.

Finally, the company could refinance some of the 2022 notes and push out some maturities. That can happen as long as debt markets are open, and if debt investors agree to give AMC a decent interest rate.

You're covered... for now

AMC shareholders shouldn't fear for their dividend payments in the near-term, though they may want to keep an eye on returns on management's investments, as well as its plans for dealing with the looming 2022 maturity. If adjusted free cash flow grows or the company decides to IPO its European segment, a major overhang could get lifted, which could boost AMC's languishing share price.