Yes! This is exactly what MoviePass subscribers have been asking for: a movie subscription service like Netflix (NASDAQ:NFLX) that requires you to go to a theater instead of sitting comfortably in your living room. And it will consist only of content that MoviePass makes. Sounds like a winner, right?

This horror show is what the Helios and Matheson Analytics (OTC:HMNY) movie ticket subscription service calls its "new strategic direction" (yeah, you're not the only one who's lost count of the number of times MoviePass has reinvented itself). While it says the new business model will capitalize on the best parts of MoviePass, its MoviePass Films production arm, and the movie information service MovieFone, it remains light on details about how moviegoers will benefit. 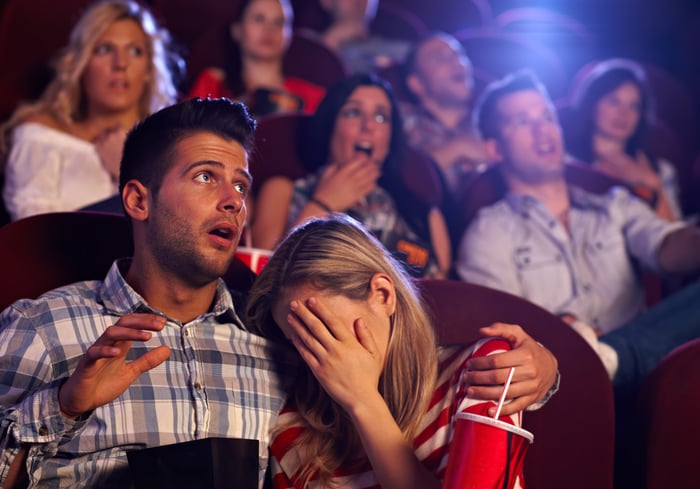 In its word salad of a press release, Helios and Matheson said it wouldn't need to rely on movie studios and theater operators to make money anymore. Through some alchemy of synergy between its different arms, MoviePass will make its own movies, promote them to subscribers who will go see them, and the money will flow into its coffers.

The gaping hole in MoviePass' new business model is that in spite of the fact that it supposedly still has 3.2 million subscribers (a questionable figure in light of the earnings restatement discussed below), there's no guarantee any of them will want to see a movie it makes. They certainly haven't run out to see those it previously backed.

Check out the latest earnings call transcript for Netflix and other companies we cover.

In one of the earliest attempts at a MoviePass makeover, the subscription service went to the Sundance Film Festival and partnered with The Orchard in a $3 million distribution deal for the heist film American Animals. According to BoxOfficeMojo, the movie made less than $2.9 million in lifetime gross receipts.

Its next big theatrical undertaking was the John Travolta vehicle Gotti, the biopic of the New York City gangster that cost an estimated $10 million to produce. It ultimately generated just $4.3 million in worldwide box office receipts.

As bad as Helios and Matheson's movie choices have been, its finances are worse. It's had to rely upon emergency loans and reverse stock splits to stay afloat and just canceled a special shareholders' meeting scheduled for Friday because it didn't have enough votes to approve yet another reverse stock split.

The gang that couldn't shoot straight

How many members MoviePass actually has is also questionable, because its owner also just announced that investors should not rely upon its previously filed financial reports because it overstated subscription revenues and improperly accounted for refunds issued by Costco, leading to a $6.6 million understatement of its net loss. An additional error related to the accounting for derivative securities resulted in a further understatement of about $2.9 million in net losses.

So instead of the $129.6 million net loss it did report, the actual loss was $138.5 million. Yet MoviePass thinks it will be able to finance the production of movies that anyone would want to see. It purports the movie production scheme will lead to increased subscriber satisfaction and retention because they'll have a greater number of movies to go see, but that presupposes it's able to produce movies in volume.

Netflix spent some $13 billion on original content in 2018 and is expected to produce as many as 90 movies this year with budgets of as much as $200 million. MoviePass will be lucky to come up with the money to finance even one low-budget flick, let alone the number needed to ensure it doesn't have to rely upon movie studios for money anymore.

If moviegoers and investors just wait a few more weeks, there's a good chance they'll get to see the MoviePass franchise reinventing itself yet again.