Apple's (AAPL 3.25%) iPhone shipments rose just 0.4% in 2018, marking its weakest annual growth since 2016. That deceleration was mostly caused by stiff competition in China and sluggish demand for its pricier new models. During the fiscal first quarter, those headwinds caused Apple's iPhone revenue -- which accounted for 62% of its top line -- to decline 15% year over year.

However, CEO Tim Cook noted that the tech titan's business still "grew outside of China" with "record performance in large markets" like the United States. A recent eMarketer report suggests the iPhone's market share is still rising in the U.S. 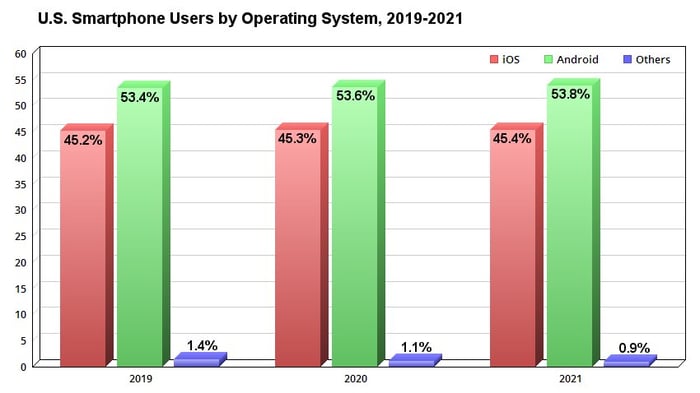 eMarketer expects 105.2 million people in the U.S. to own an iPhone in 2019, and that figure should edge higher through 2021. However, eMarketer director Shelleen Shum notes that growth will be supported by sales of older and newer iPhones "at different price points."

This indicates that Apple's less expensive devices could still cannibalize its pricier ones, which occurred last year when customers bought the cheaper iPhone XR instead of the high-priced XS. To counter that shift, Apple must keep launching new devices and services to reduce its overall dependence on the iPhone.