The Cupertino tech giant kicked off the week with two new iPads.

Next week, Apple (AAPL -3.00%) will host an event that is expected to focus heavily on new services: a new video-streaming service and likely a premium news subscription service. Meanwhile, the company has been widely expected to have new iPads in the works, and the event would have been a natural opportunity to show off the new tablets. Instead, Apple made the surprise move of refreshing the lineup this morning, a week before the event.

Here's what the tablet leader's portfolio looks like now. 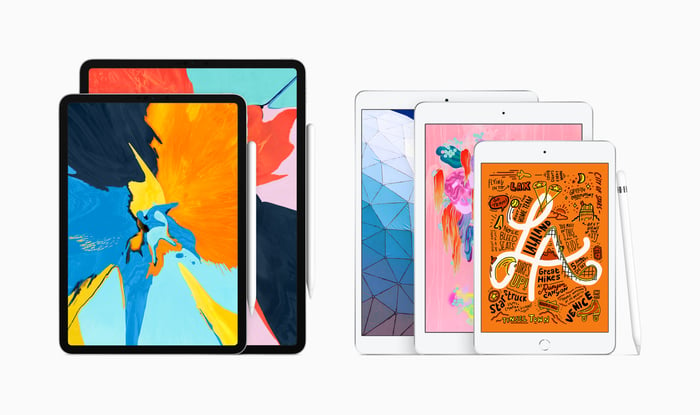 Bringing back the Air

Apple has brought back the iPad Air brand, and the new model features a 10.5-inch display alongside the latest A12 Bionic chip, which was introduced last year in the newest iPhones. The refreshed Air enjoys a 70% boost in performance and twice the graphics capability, according to Apple. The new iPad Air effectively replaces the older iPad Pro 10.5, which had many of the same specs and the same form factor.

Apple had retired the Air branding a couple years ago, but is bringing back the moniker in an effort to better differentiate the iPad Pros. The company released bezel-less iPad Pros with Face ID last year, but still sold the older iPad Pro 10.5 with Touch ID for a few months. Note that Apple did not put a more-powerful A12X Bionic chip inside, which is reserved for the iPad Pros -- another point of differentiation. The Air is also losing ProMotion, the higher refresh rate that debuted on the iPad Pro 10.5, potentially to reduce costs.

Perhaps the most meaningful change is the price. The new iPad Air now starts at $500 for a Wi-Fi model (cellular models start at $630), down from the iPad Pro 10.5's starting price of $650. Distancing the Air from the Pros in price helps with product segmentation.

The iPad Mini has also been in dire need of an upgrade, with the last update being over three years ago. The iPad Mini 5 is mostly a spec bump, similarly adding an A12 Bionic chip to replace the aging A8. Consumers hoping for a full redesign and Face ID will have to wait a little bit longer.

The new Mini gets a TrueTone display, allowing it to adjust the color temperature based on the ambient environment. Apple is also adding support for the first-generation Apple Pencil, the stylus that charges via the Lightning port instead of the second-generation Pencil that charges wirelessly. Every iPad now supports an Apple Pencil.

While there had been rumors that Apple would try to make the iPad Mini 5 cheaper, the company kept the tablet's starting price at $400 while reducing the base storage to 64 GB.

The overall lineup makes a little more sense now. The most affordable base iPad still starts at $330, and the iPad Mini 5 justifies its slightly higher $400 price tag with better performance and portability. The iPad Air sits at $500, the same starting price as the original iPad, with the iPad Pros positioned as laptop replacements at $800 and higher.

iPad revenue put up the strongest growth in six years last quarter, thanks mostly to pricing power. Apple utterly dominates the tablet market, and is making sure that it has offerings covering virtually every price point and use case -- except for the extremely low end of the pricing spectrum, where it has no interest in competing.