In a preliminary report of its full-year 2018 earnings, BMW AG (BMWYY 0.60%) (BAMXF -0.04%) said on March 15 that its operating profit fell 7.9% from a year ago, to 9.12 billion euros ($10.3 billion), on unfavorable exchange-rate movements and higher investments in electric vehicles. BMW said it will ramp up its cost-cutting efforts in order to sustain its future product spending despite economic and currency-related headwinds. The company will also reduce, but not eliminate, its dividend.

BMW will present its complete fourth-quarter and full-year 2018 results on Wednesday, March 20. 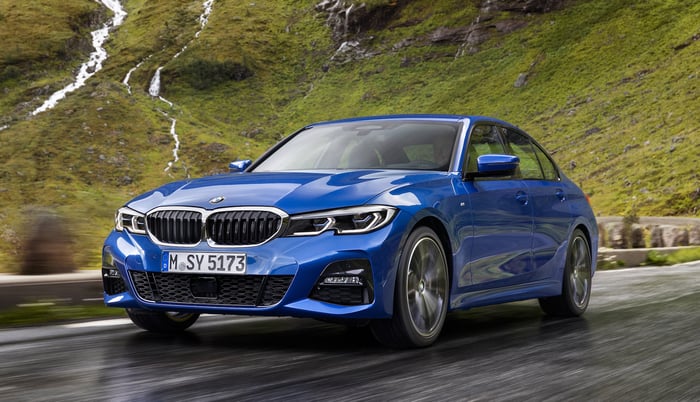 BMW will look to an all-new version of its iconic 3 Series sedan for a sales boost in 2019. Image source: BMW AG.

As mentioned above, the report that BMW issued on March 15 is a preliminary report of its full-year 2018 earnings. It contained only highlights, not the in-depth numbers that BMW typically presents in its quarterly reports. Like many other German companies, BMW releases its detailed fourth-quarter and full-year results at its annual shareholders' meeting, scheduled for March 20 this year.

That said, BMW did give us enough detail to have a clear idea of how the year went, along with an early view into what the company's leadership expects in 2019.

For the most part, BMW's profit story has been consistent for the last several quarters. On the one hand, the company has been enjoying good sales of its higher-margin crossover SUVs. On the other hand, it's spending aggressively to develop autonomous-driving technologies and electric vehicles. In 2018, BMW's research-and-development spending rose 12.8% from 2017, to 6.89 billion euros, and its capital expenditures rose 7.3%, to 4.69 billion euros.

BMW's plan has been to use higher SUV sales to offset its spending on future technologies. That worked to some extent for a while, but higher raw-materials costs, unfavorable exchange-rate movements, and costs related to new emissions-testing standards in Europe complicated that effort in 2018.

The upshot: While vehicle deliveries rose slightly and revenue was roughly flat, BMW's 2018 operating profit fell 7.9% from its 2017 result and its automotive division's EBIT margin fell 2 percentage points, to 7.2%.

"We expect strong headwinds to continue to effect the entire sector in 2019," said CEO Nicholas Peter. "In view of current developments, we intend to further broaden and significantly intensify [cost-cutting] efforts."

Peter said that BMW expects several kinds of headwinds in the year ahead, including:

In response, BMW will ramp up its ongoing cost-reduction efforts, he said. Among other measures, BMW now plans to "reduce product portfolio complexity" by eliminating less-profitable models and model variants, such as the Gran Turismo variant of the 3 Series sedan.

BMW also announced a cut to its annual dividend -- not a surprise given its outlook and past practice. This year's dividend will be 3.50 euros per share of common stock and 3.52 euros per share of preferred stock, both down 0.50 euros from last year's record level. BMW said the total payout of 2.3 billion euros will be 32% of its 2018 net income, up from 30.3% last year.

Looking ahead: A preview of BMW's guidance

While BMW won't issue its full guidance for 2019 until its annual meeting on Wednesday, it did give us a peek into its expectations. It said that it expects a "slight increase" in its sales volume in 2019, driven by new models, including a new version of the big-selling 3 Series sedan. It cautioned, however, that the rollout of the new 3 Series could dampen year-over-year sales growth in the first half of 2019.