Some stocks just go out of favor for no clear reason, and high-yielding Eaton Corp. (NYSE:ETN) looks like one of them -- the stock trades near the bottom of its peer group in terms of valuation. However, management's guidance calls for ongoing margin expansion and strong free cash flow (FCF) generation in the coming years. With a well-supported current dividend yield of 3.6%, investors might want to ask what's going on, and whether Eaton's stock is due a revaluation.

Eaton looks like a good value on a relative basis

Compared to its peers Eaton looks undervalued. As you can see in the chart below the company trades toward the bottom of its peer group on an FCF-based valuation.

It's true that Eaton faces cyclically risk, but then again so does a company like 3M (NYSE:MMM) which the market seems willing to give the benefit of the doubt when it comes to growth prospects.  3M has a lot of short-cycle business which could slow given any deterioration in the economy. 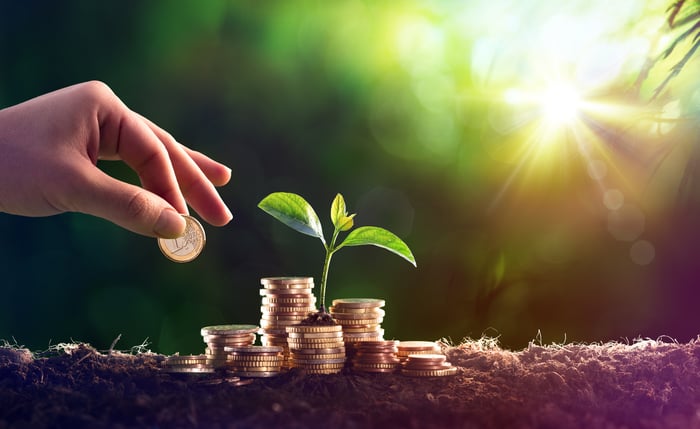 Moreover, Rockwell Automation (NYSE:ROK) had a good first quarter of 2019 and maintained full-year guidance, but the stock is still dependent on capital spending trends in the industrial sector -- the first thing that gets cut in a slowdown.

Furthermore, if you are worried about long-term growth and margin prospects in Eaton's core electrical products and electrical systems and services segments, then it's not clear why Schneider Electric, Legrand, or even ABB should trade at a premium to Eaton. 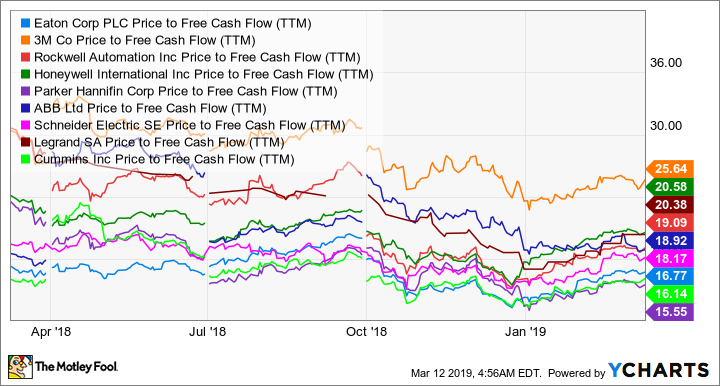 All told, Eaton looks undervalued compared to its peers.

Check out the latest earnings call transcript for Eaton Corporation.

The recent investor day presentations saw management affirm that the company was on track to hit its 2015-2020 aims. You can see the key parts of the guidance below.

Moreover, management expects to generate $8 billion in FCF in the next three years -- a figure that will cover the expected dividend payout of $3.5 billion 2.3 times over, meaning there are no worries about the sustainability of its dividend. In addition, it will have around $1.5 billion left over annually to buy back shares or make earnings-enhancing acquisitions. Put another way, Eaton expects to generate 24% of its market cap in FCF in the next three years.

Based on management's expectations Eaton looks attractive, but the question is whether the company will hit its targets or not. And there's little doubt that some of the company's end markets face pressure.

For example, industrial production growth is set to slow in 2019, and around a third of Eaton's electrical businesses sell into machine builders and industrial facilities -- and the hydraulics segment also has exposure. Meanwhile, its vehicle segment has heavy exposure to the trucking industry, a market set to slow in the coming years.

That said, as you can see below Eaton has exposure to plenty of other end markets, such as utilities, commercial construction, data centers (electrical businesses), aerospace, and construction equipment (hydraulics). 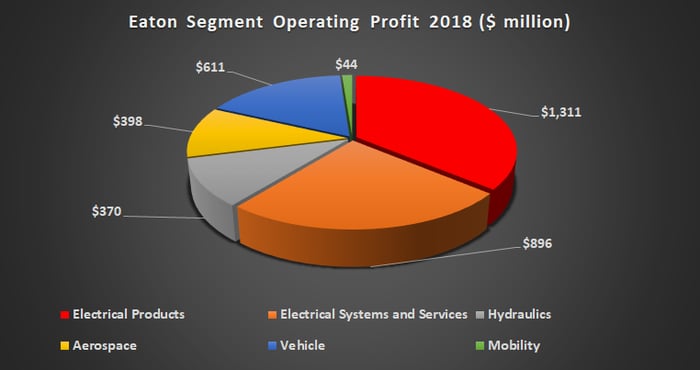 Provided the economy avoids a recession, it looks likely that Eaton can still grow earnings in the next few years -- not a bad result considering the stock looks undervalued based on its current earnings alone.

Three reasons why Eaton can do well in a slowdown

Moreover, even if there is a slowdown Eaton's stock should be able to withstand the pressure. FCF generation could suffer, but as we've already it's so strong that the company could conceivably use the cash flow to buy a low-single-digit percentage of its own stock if it falls.

Management also outlined that its efforts to expand margin in recent years means its next earnings margin trough is likely to be higher than the last cycle's peak margin in 2005.

In addition, management expects to spend just 5.5%-6% of sales on capital expenditures and research & development. Compare this with 3M's figure of around 11%. In other words, if the economy slows Eaton won't be caught investing a significant part of its revenue in products just as the market turns sour. 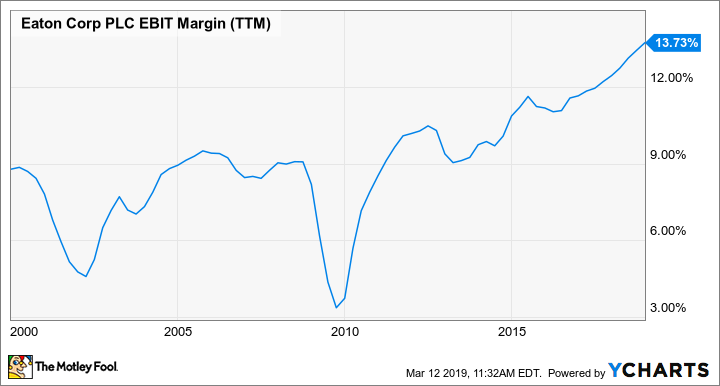 Eaton isn't an exciting growth stock, and it's unlikely to shoot the lights out in terms of performance, but those aren't things every investor is necessarily looking for.

The stock has a cyclical risk, and it's likely to get pushed around by economic sentiment. However, if you can ignore the noise and you're looking for an undervalued, high-yielding stock with a dividend that's likely to grow even in a slowdown, then Eaton is a good choice.