The world needs to invest a jaw-dropping amount of money on infrastructure in the coming years. The global spending requirement on economic infrastructure projects alone (i.e., transport, water, power, and telecom) is a mind-boggling $3.7 trillion per year through 2035, according to a report by McKinsey Global Institute. On top of that, the North American energy industry must pour $800 billion into building new oil and gas midstream infrastructure over that time frame. Those market opportunities are so massive that investors won't want to miss them.

That's why investors should take a closer look at infrastructure stocks. Three worth putting on your watch list this month are Tallgrass Energy (TGE), NV5 Global (NVEE 3.43%), and Quanta Services (PWR 4.02%). 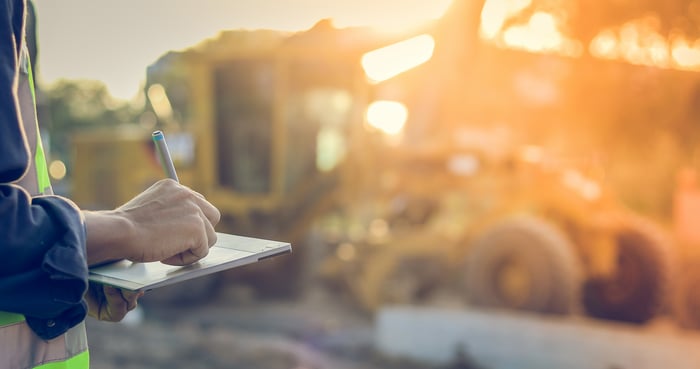 Keep an eye on these oil infrastructure projects

Matt DiLallo (Tallgrass Energy): Oil and gas midstream company Tallgrass Energy has invested more than $3.5 billion over the last several years to expand its energy infrastructure platform. These investments, including both acquisitions and expansion projects, have grown the company's earnings from $231 million in 2013 up to $860 million in 2018.

Tallgrass Energy is working hard to secure its next phase of growth and has three notable projects in development. First, the company is hoping to team up with energy infrastructure giant Kinder Morgan (KMI 3.34%) on a joint venture that would increase oil pipeline capacity out of the Rockies to Kinder Morgan's oil hub in Oklahoma. Tallgrass Energy is also developing the Seahorse Pipeline that would move crude from Oklahoma to the Louisiana coast, where it has proposed building the Plaquemines Liquids Terminal (PLT) to export this oil to global markets. The company has taken notable steps forward on each project, which increases the likelihood it can eventually start construction.

If successful in securing all three projects, Tallgrass Energy would be able to build a "wellhead-to-water" system capable of moving oil from newly drilled wells in the Rockies to seaborne markets via oil tankers filled at PLT. Meanwhile, with long-term contracts backing that integrated system, Tallgrass has the potential for a significant increase in its cash flow over the next few years. That intriguing upside potential is why investors should put Tallgrass on their infrastructure watch lists.

A serious "buy on the dip" opportunity

Jason Hall (NV5 Global): Mr. Market wasn't happy when upstart engineering company NV5 Global reported earnings, sending shares down a painful 32% following the release. And while plenty of buyers have helped offset some of those big losses for investors who've held, the stock price is still down about one-third from the all-time high reached late last summer: 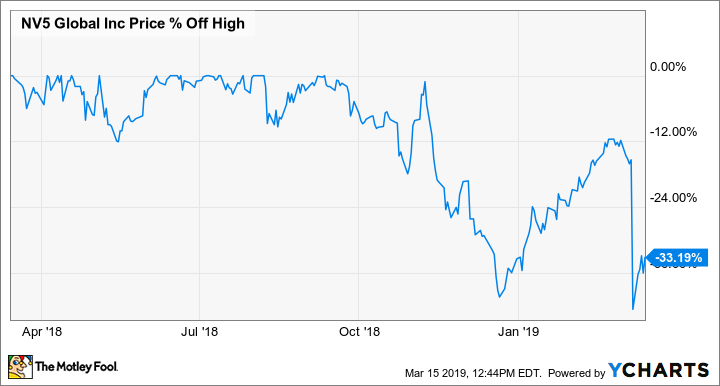 Here's the thing: Investors weren't selling on bad results in 2018. The company did come in just a touch below analyst expectations for revenue and earnings, but the biggest catalyst for the sell-off was the company's guidance for 2019, which called for much slower growth than it has delivered in recent years.

And I think this short-sighted focus on 2019 has many investors completely missing the still-incredible long-term prospects in front of NV5 Global.

The global infrastructure need remains massive, with the dual tailwinds of overdue modernization in developed countries and population growth in emerging economies combining for nearly $95 trillion in infrastructure spending needed by 2040.

Furthermore, NV5 Global has a track record of setting conservative early guidance that it typically ends up exceeding.

Today, investors have an opportunity to take advantage of the market's overreaction. Shares trade for between 21 and 24.8 times company guidance for 2019 earnings, making it incredibly cheap, considering it's grown earnings per share an incredible 227% over the past five years and just reached $400 million in annual revenue last year.

Travis Hoium (Quanta Services): As the energy industry changes to use cleaner sources of energy, more natural gas pipelines are needed as more renewable-energy assets are built. That means more demand for Quanta Services' specialty contracting. The company builds infrastructure like transmission lines, energy pipelines, and telecommunications networks, creating the infrastructure that companies run on, particularly in the energy industry.

Business has been booming over the past decade, growing to more than $11 billion in revenue over the past year. Net income has been choppy over that time frame, but management expects to generate $925 million in adjusted EBITDA in 2019, up sharply from $526 million in 2015. Given the company's $5.3 billion market cap, there's value in shares right now. 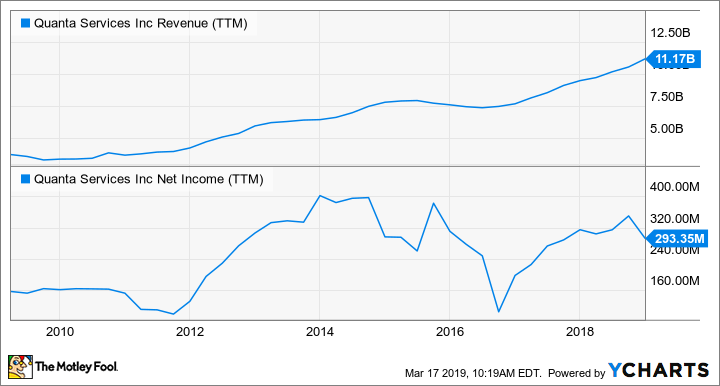 The wind continues to be behind Quanta, both figuratively and literally. More wind and solar assets are being built across the country, which requires new transmission lines that are its bread and butter. And natural gas production continues to rise, driving more pipeline construction. The macro trends are helping Quanta Services grow, and that should drive great returns for long-term shareholders of this infrastructure stock.