Another poor quarter and another cut to guidance. But there are some "green sprouts" emerging at FedEx.

Shares of FedEx (FDX 0.63%) fell 5.6% on Wednesday morning after the shipping giant missed on earnings and cut its 2019 full-year profit forecast for the second time, causing a number of analysts to cut their price target for the stock.

After markets closed Tuesday, FedEx reported fiscal third-quarter adjusted earnings of $3.03 per share on revenue of $17 billion, short of expectations for $3.11 per share in adjusted earnings per share (EPS) and $17.67 billion in revenue. The company said it now expects to earn $15.10 to $15.90 per share for the full fiscal year, down from earlier estimates of $15.50 to $16.50 per share and below the $15.97 consensus estimate.

FedEx had already lowered its full-year guidance back in December. Then, like now, the company is blaming slowing global trade growth and weakness in its international Express business for the shortfall.

Check out the latest earnings call transcript for FedEx. 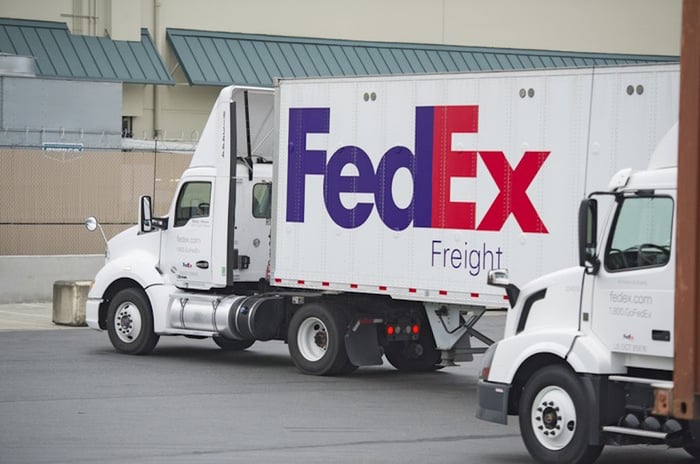 Company chairman and CEO Fred Smith on a call with investors said FedEx had started the year hoping for a $6 billion revenue increase year over year, but now expects to be closer to $4.5 billion in sales growth, noting an unusual combination of tariffs, a U.S. government shutdown, weather events, and weakness in Asia and Europe for the company's sluggish performance. "This was a very, very tough operational winter and in some cases unprecedented," Smith said on the call.

The company also reported higher costs domestically as it continues to roll out year-round, six-day-per-week Ground delivery operations in the U.S.

Following the earnings release, FedEx was downgraded to neutral from overweight at JPMorgan and a number of brokerages, including Barclays, KeyBanc, BMO Capital, and Cowen, lowered their price targets on FedEx shares.

Despite the poor results, there was actually evidence in the quarter suggesting the worst might be over for FedEx. On the call, Smith said the company is seeing "a few green sprouts" heading into Spring, including some signs that Europe is improving. The shift to six-day service in Ground will continue to weigh on results as it's fully implemented but should position FedEx to grow its e-commerce delivery business and, over time, better utilize its existing assets.

Shares of FedEx have lost 30% of their value over the past year. The recent results are evidence that it's unlikely there'll be a quick turnaround. However, it feels like the worst is finally in the past for FedEx.

Checking In on FedEx, Nike, and Interest Rates

Is It Time to Buy the S&P 500's 2 Worst-Performing September Stocks?