I think Shopify (NYSE:SHOP) could one day be worth hundreds of billions of dollars. That might seem far-fetched. And I don't have solid numbers to back up my theory. I also don't think I need them. Read on to see why.

Imagine this: It's February 11, 2016. You decide to invest $100,000 in a tiny Canadian company called Shopify. It's a bit obscure -- founded by a German snowboarder who decided to ditch his passion for snowboards for the e-commerce platform he built to sell his snowboards.

Let's fast-forward a little over three years. How much are your Shopify shares worth today? The answer is astounding: $1.06 million. In this example, Shopify is literally a millionaire-maker stock.

Clearly, if you haven't bought into Shopify by now, you've missed the boat. Right? 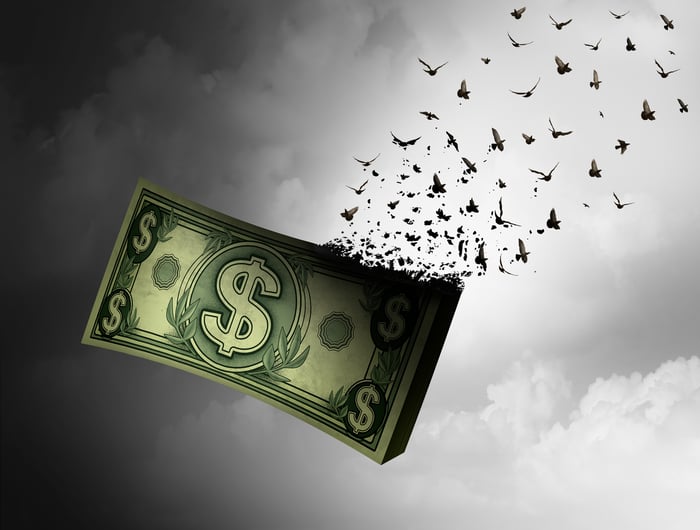 Isn't it too expensive?

Spoiler alert: I don't think it's too late to buy Shopify. In fact, I wrote an article on this very subject two months ago. You can read the full story, but here's a bullet-point summary:

But I recently got an email from a reader asking if the stock is simply too expensive. It read:

I agree [Shopify] has a decent moat with the high switching costs and the network [effect] of Shopify apps is the icing on the cake. However, on whatever metric I look at it ... [Shopify] looks not just expensive, but overvalued. ... Where do you draw the line on owning a stock whose moat you admire but is just too expensive? Is there a valuation metric that is a red flag or veto?

These are great questions. Shopify isn't profitable -- and yet it's valued at over $20 billion. It isn't free-cash-flow positive. Growth is slowing. The company's price-to-sales ratio of 21 is five times higher than that of e-commerce leader Amazon.

But Shopify accounts for a full 7% of my real-life holdings and I have no intention of selling any of them. I have zero red flags when it comes to not buying a stock based on valuation. There are three reasons for this -- and I think it's worth reviewing all three.

1. Don't try to predict the future

Think about it for a minute: A stock's price is really nothing more than a prediction of where a company is headed in the future. How far into the future? That depends entirely on your investing horizon.

But reading Nassim Nicholas Taleb's works -- Fooled by Randomness, The Black Swan, and, perhaps most important, Antifragile -- convinced me that there was a better way. Taleb says everything in the world can be divided into three groups:

Almost everyone knows about the first two, but we don't consider the third group nearly enough. This is especially true when it comes to investing.

Instead of looking at the total addressable market for a company and trying to extrapolate how it'll do -- something that will require predicting the future -- we can simply measure how antifragile a company is. No predicting necessary.

How do we do that? I've developed a three-pronged method.

First, I look to see if the company has a barbell approach. On one end of the barbell, a company has one line of business that's reliable, steady, and protected by a wide moat. I've already discussed how Shopify benefits from both high switching costs and network effects. Its payment option and subscription services are on this end of the barbell.

On the other end of the barbell, a company can devote 10% to 20% of its resources on high-risk, high-reward new lines of business. Shopify is doing this in its merchant services segment with Shopify Capital, Shopify Shipping, and other projects. Simply put, there's no way to predict the lines of business Shopify will have in the future.

Second, I look at how much skin in the game the people at the company have. At Shopify, there's a lot of skin in the game. The company is run by its CEO, who also happens to own, along with other executives, over 12 million shares. The company also gets stellar reviews from employees on Glassdoor.

Finally, make sure that the company can benefit from unforeseen economic crises. I do that by checking on a company's free cash flow, total cash balance, and debt load. While Shopify lost $19 million in free cash flow over the past year, it has a cash (and investments) position of $2 billion versus zero long-term debt. That means it's likely to not only survive but thrive in a chaotic environment.

The second reason I don't quibble about valuation has to do with my time frame. When I make an investment decision, I like to keep the year 2050 in mind. Why? Because that's when I expect I'll need to start seriously calling upon my investment portfolio to provide for myself in retirement.

This realization alone is powerful -- it helps keep me calm when the market falls. But it also helps me feel much more at ease when it comes to ignoring valuation.

3. Start small and keep it in proportion

Finally, it's important to remember that there are no rules when it comes to investing in stocks. You can buy or sell a stock -- in any amount -- on any day the market is open.

While I don't have valuation red flags when it comes to deciding whether to buy a stock, I do use valuation metrics to determine proportion. If I know a stock has high expectations baked in -- as is he case with Shopify -- I'm not going to let the stock occupy 7% of my portfolio overnight.

And while I don't sell based on valuation, I will sell a stock when it comes to occupy more than 20% of my holdings. That's beyond my comfort level.

Apply this strategy to Shopify...and other growth stocks

Do I know Shopify will one day be worth hundreds of billions? No. Do I believe it's possible? Absolutely. The company is antifragile. It has everything I look for in a company.

As long as I'm clear-eyed in my evaluation of a company, keep things in a long-term perspective, and don't buy too much of a stock position all at once, I'm not worried about valuation.

Of course, this strategy might not help investors closer to retirement. Then again, those folks probably should be mindful of valuation. But for those of us who love growth stocks and have decades until retirement, don't lose sleep over it.