Wall Street celebrated on Thursday, as major stock indexes gained 1% or more to continue a recent upsurge. After a big drop last December, the S&P 500 and other benchmarks are starting to get close to setting all-time highs yet again, and today's advance was broad-based, reflecting enthusiasm for several high-growth areas across the market. Conagra Brands (CAG -0.14%), NVIDIA (NVDA 2.84%), and Align Technology (ALGN 2.38%) were among the top performers. Here's why they did so well.

Shares of Conagra Brands gained nearly 13% after the food giant reported its fiscal third-quarter financial results. Revenue jumped due to Conagra's recent acquisition of Pinnacle Foods, and adjusted net income inched up from year-earlier levels despite higher interest expenses. More importantly, the company said that its efforts to make improvements at Pinnacle are starting to pick up momentum, and CEO Sean Connolly was excited about how "brand building and innovation actions over the past several years have resulted in strong growth in our frozen and snacks portfolios," and Conagra has the potential to apply those lessons across its business. 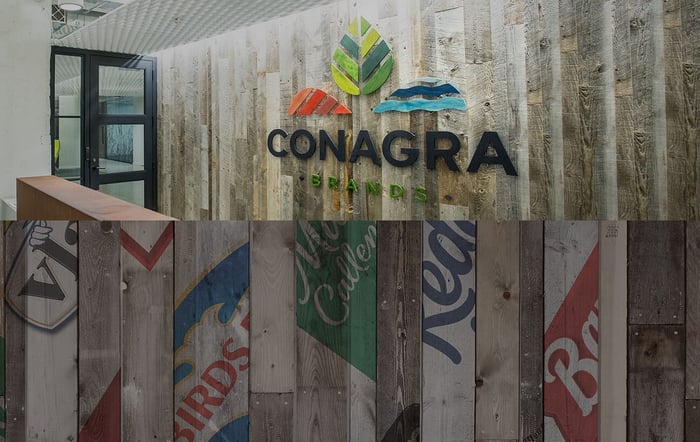 NVIDIA stock added 5.5% in the wake of good news from elsewhere in the chip sector. Memory chip giant Micron Technology reported its latest quarterly results Wednesday night, and although its top- and bottom-line numbers were both weaker than year-ago levels, investors were nevertheless pleased to see signs that the downturn in semiconductors might be close to hitting bottom and signaling a new move higher for the cyclical industry. NVIDIA has been more aggressive in staking out its own growth, announcing earlier this month that it would purchase data-center chip specialist Mellanox Technologies in an effort to bolster its presence in that high-growth market. With the market rebounding today, NVIDIA is in a prime position to return to its former highs.

Align straightens up in China

Finally, shares of Align Technology rose almost 6%. The maker of orthodontic tooth-straightening appliances announced the opening of a second training facility in China, with the new Shanghai-based location giving Align the chance to educate orthodontists and other medical professionals, as well as showcasing the latest innovations in treatment and digital dentistry. China is Align's second-largest market, and with the company facing competition in the U.S., investors could well believe that overseas markets will be Align Technology's best opportunity for sustainable growth.

Bear Market Buys: 3 Growth Stocks to Buy on the Dips
405%