Disney (NYSE:DIS) was able to grow ESPN+, its sports content streaming service, to 2 million subscribers in short order thanks in large part to investments in content. Its deal with the UFC to air UFC Fight Night events starting this year led to almost 600,000 new sign-ups ahead of the premiere in January.

Following that success, ESPN recently announced it had upped its five-year deal with the UFC to seven years and added the pay-per-view distribution rights as well. ESPN+ is now the exclusive home to the UFC's pay-per-view events.

The new deal offers a tertiary revenue stream for ESPN+ (after subscription and ad revenue). UFC pay-per-view events generated an estimated 5.5 million buys last year. Even at a generous 75% take for UFC (due to the exclusivity of the deal), that could generate another $80 million-plus for ESPN+. 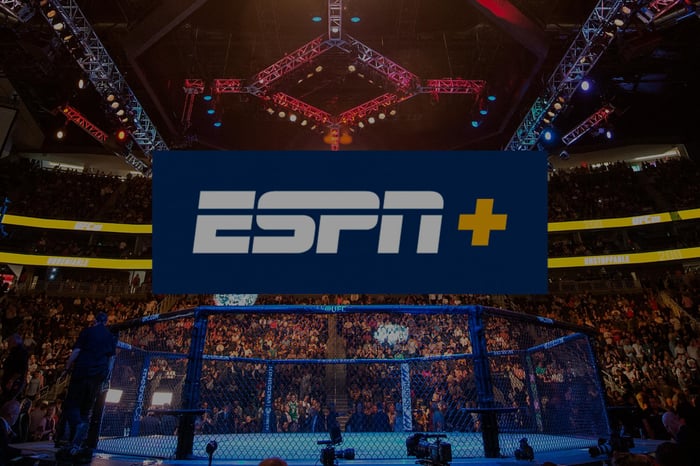 Anyone familiar with the origins of ESPN knows it didn't debut on cable TV systems with high-profile major sporting events like its networks air today. It bought the rights to smaller niche sporting events and filled in the rest of its airtime with original programming. Over time it grew its audience and its pricing power with distributors to go along with it. That gave it the budget to afford massive nationwide sports rights.

ESPN is following a similar path with its new direct-to-consumer endeavor, ESPN+. UFC has a loyal following among a relatively small group of sports fans. But the addition of 568,000 new sign-ups in just two days ahead of the first Fight Night on ESPN shows that it's increasingly clear that fans are willing to pay for access to event broadcasts.

The new deal between ESPN+ and UFC cements the relationship both financially and in UFC fans' minds. ESPN+ is now the source for UFC content. Fans can no longer buy UFC pay-per-view events through their cable or satellite TV provider.

The UFC deal could be just a steppingstone for ESPN to reach even bigger and higher-value deals with other sports leagues for their streaming video rights. The company may eventually want to bring content with broader appeal to the platform in order to continue growing its subscriber base, just as it did with its cable networks.

The 2 million ESPN+ subscribers the company has managed to attract in less than a year is very impressive. It's one of the fastest-growing over-the-top video services. But if ESPN+ is going to offset subscriber losses at ESPN's main television networks, it will need to garner broader appeal and grow its subscriber count well into the tens of millions.

ESPN is already taking the opportunity to offer UFC fans the chance to bundle a single pay-per-view pass with a yearlong subscription to ESPN+ at the discounted price of $79.99. ESPN+ normally costs $49.99 per year (or $4.99 per month) and pay-per-view events cost $59.99.

But there's an opportunity beyond just offering a discount to sign up new ESPN+ subscribers.

As part of the deal with UFC, ESPN+ is the only consumer service offering access to the biggest fights. That gives Disney an opportunity to sell consumers on its own Hulu Live TV service by offering subscribers discounted access to the UFC pay-per-view events and ESPN+. That exclusive access would help differentiate Hulu Live TV from other pay-TV providers.

Disney took majority control of Hulu following the close of its 21st Century Fox acquisition. CEO Bob Iger has already talked about the opportunities to offer bundling discounts to consumers that want more than one of its direct-to-consumer products. UFC pay-per-view events are just one opportunity to take advantage of bundling and grow Hulu's share of the pay-TV industry. Disney will likely find more opportunities as it adds additional content to ESPN+ and following the launch of its Disney+ service later this year.