Captain Marvel's blockbuster opening and strong second-weekend performance propelled the film to a nearly $800 million global gross in its first 13 days in theaters, solidifying the picture as the latest big hit in Disney's (NYSE:DIS) superhero franchise.

The strength of that opening puts the movie in good position to surpass $1 billion in ticket sales, and bodes well for future entries in the Marvel Cinematic Universe (MCU). That's good news for the House of Mouse and its shareholders, because there are some looming shakeups on the horizon for the franchise, and movies continue to be an important part of the Magic Kingdom's growth story.

The MCU's success is unprecedented

Films in the Marvel Cinematic Universe accounted for roughly $1.6 billion in domestic ticket sales in 2018 -- a bit more than half of the total North American ticket sales for all of Disney's movies in the year. The superhero genre has become very important for the company, and declines for the genre at large or the MCU in particular could have a material impact on its performance.

To its credit, Disney has done a great job of keeping audiences engaged more than a decade into its big superhero movie project and the great results for Captain Marvel show that the MCU is still a top draw at the box office.

Since its start in 2008, the Marvel Cinematic Universe has grossed a whopping $18.3 billion at the box office across 21 film releases -- good for an average gross of roughly $870 million. That's an incredible feat, and the additional contribution from Captain Marvel should nudge the franchise's average even higher.

Being able to consistently deliver that kind of performance across so many films is unprecedented, and Marvel's ability to link separate film story lines remains the envy of the big-budget film industry. Disney was no doubt keenly aware of its unique ability to advertise two movies at the same time when it released a trailer for Avengers: Endgame that prominently featured Brie Larsen's Captain Marvel, just days after that character's recent big-screen debut.

The Marvel Cinematic Universe project was started around this idea that each film in a connected movie franchise could function as a reason to go see other tangentially related stories, and that characters could meet up in big event movies. The franchise got its big start with Iron Man, and favorable audience response to that film then helped lay the groundwork for hits like Captain America,which in turn went on to support the launch of other new solo movies and superhero team-up films.

And the impact that superheros have for Disney extends far beyond the box office. In addition to home video distribution and the company's upcoming streaming service, MCU characters are also a key asset for the company's theme parks and merchandising businesses -- although Disney can't use every Marvel character at its parks and resorts due to agreements that were in place prior to its acquisition of the legendary comic book publisher. 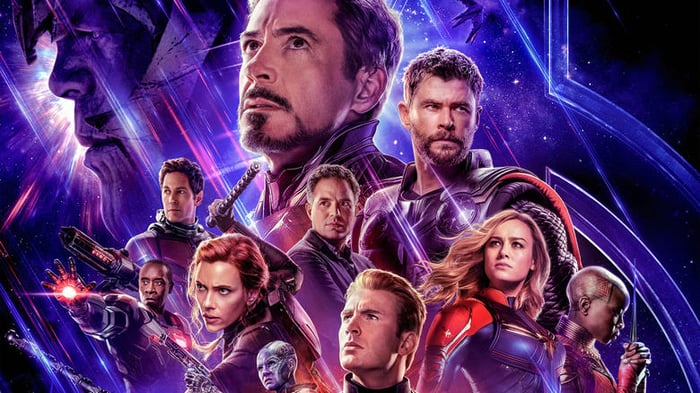 Big things ahead for the Marvel universe

While Captain Marvel's box-office success most immediately suggests a favorable outlook for future Marvel Cinematic Universe entries, it also bodes well for the genre as a whole.

Superhero movies have tended to do pretty well over the past decade, so long as the film is of decent quality and receives solid promotional work. A lot of that is because the global film market has grown at a healthy clip and superhero films translate well in international markets. Just under two-thirds of Captain Marvel's ticket sales have come from markets outside of North America. Two-thirds of Avengers: Infinity War's $2 billion global box office came from international markets, and the picture did roughly $200 million in its Chinese opening weekend alone -- performance that would have been unattainable a decade ago.

A healthy outlook for the superhero genre is also good news for Disney given its $71.3 billion acquisition of Twenty-First Century Fox assets including the film rights to Marvel properties like the X-Men, Fantastic Four, and Deadpool series. Incorporating some of the newly acquired Fox characters will be one of the next big pushes for the MCU and could be a significant draw for audiences.

After Avengers: Endgame, which is due for release on April 26, it's expected that franchise stars like Chris Evans and Robert Downey Jr. could be done with the property for a while. Both actors have made comments to that effect, and the franchise is now looking for a fresh roster of stars who can anchor big team-up movies.

Success for Captain Marvel represents a step forward for Disney in setting up new characters to anchor the MCU franchise, and the film's eponymous heroine is positioned to play a big role in the series' overarching story from here on out. Other recent hits like Black Panther also bode well for the company's ability to successfully introduce new heroes to carry the Marvel world going forward, an important factor in sustaining franchise longevity.

The property looks to be in great shape ahead of Avengers: Endgame. Last year's Avengers: Infinity War did over $2 billion in ticket sales worldwide -- good for the the fourth-highest unadjusted total in history -- and it's reasonable to expect that Endgame could put up similar numbers.

That's a promising backdrop for the superhero movie genre. Disney will likely be able to keep audiences interested as long as it can continue to find new hooks and deliver experiences that go over reasonably well. It doesn't appear that the superhero craze is in danger of flaming out anytime soon.