A small cup of coffee isn't going to convince anyone to switch.

Burger King had the opportunity to drive a wedge deep into the fast-food breakfast wars with its new $5 a month coffee subscription service, but because it chose timidity over boldness, the Restaurant Brands International (QSR 0.75%) chain will instead lag behind its rivals.

The coffee wars are still brewing up trouble

Using Burger King's mobile app, customers who sign up for the $5-a-month service can order a small cup of the restaurant's premium BK Cafe coffee every single day. As the burger joint noted, "For the price of a large cappuccino from Starbucks, you can have a BK Cafe brewed coffee every day for a month." The cost is equivalent to $0.17 a day, certainly a bargain anywhere. 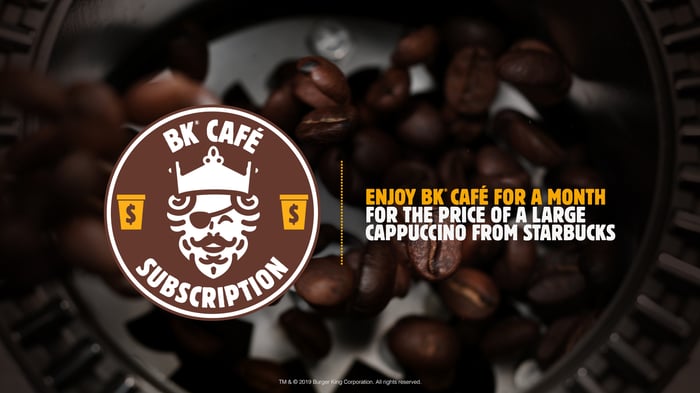 Although Burger King is not typically noted for its coffee in the way McDonald's (MCD -1.15%) or Dunkin Brands' (DNKN) Dunkin' donuts and coffee chain is, the promotion offered the restaurant a chance to peel off customers from both, particularly as the two chains were also actively wooing customers for the morning daypart.

McDonald's launched a donut sticks campaign earlier this year that is proving popular, while Dunkin' made available its Go2s value menu deals for breakfast.

Burger King is trying to draw in customers with the lure of cheap, premium coffee and hoping they'll stay for a "croissanwich" or sourdough breakfast sandwich. The discounted coffee is available all day long, but breakfast has been the engine fueling the growth of fast food.

The competition is getting more intense, evidenced by the fact that McDonald's donut sticks are the first new breakfast item the chain has introduced in the past 15 years. The last innovation was the McGriddle in 2003.

Unfortunately, Burger King's promotion falls short of the mark. By making the subscription coffee a small cup, it dramatically reduces its value -- the medium cup would intuitively be the most popular size. Moreover, Bloomberg says the price of coffee beans has fallen to its lowest level since 2006, meaning it wouldn't have cost Burger King much more to invest in a size that would convince a consumer to consider changing their preferred brand of coffee.

While a casual Burger King customer could be convinced to become a loyal one with the promotion, there's not enough behind the service to have a customer even marginally loyal to McDonald's or Dunkin' make the switch. And Burger King would have been even harder pressed to get a Starbucks customer to try a cup since price isn't necessarily the first consideration such a customer considers when making a purchase.

Check out the latest earnings call transcript for Restaurant Brands International and other companies we cover.

A cold cup of joe

Unlike the really smart campaigns Burger King ran by giving away a Whopper for a penny if it was ordered in or near a McDonald's restaurant, or giving away a free Big King XL sandwich if a customer paid for it using a commemorative McDonald's MacCoin, the $5 per month coffee subscription service falls flat in comparison.

It is novel and will attract some people just because of the publicity Burger King got by launching it, but a small cup of coffee even at a very discounted price amounts to small change when asking customers to make a switch from their usual morning destination.

Wendy's vs. Restaurant Brands International: Which Is the Better Dividend Stock?

This Consumer Stock Is Trouncing the Market in 2022, and It Just Got a Major Boost