Facebook's (NASDAQ:FB) Oculus unit announced its latest Rift headset last Wednesday, and it may have fallen a little flatter than the company had expected. The new Rift S is a PC-tethered VR headset that dispenses with some of the hassles of its earlier systems, including the need to set up external sensors. However, it isn't a game-changer -- early reviews indicate that it's only an incremental improvement on the Rift.

The Rift S doesn't eliminate the need for a gaming PC, nor does it dramatically improve the user experience. But it will occupy a natural  place in the company's VR lineup, leveraging some of the technology the wireless Oculus Quest will bring to the market. And from that perspective, it may be a nice step forward. 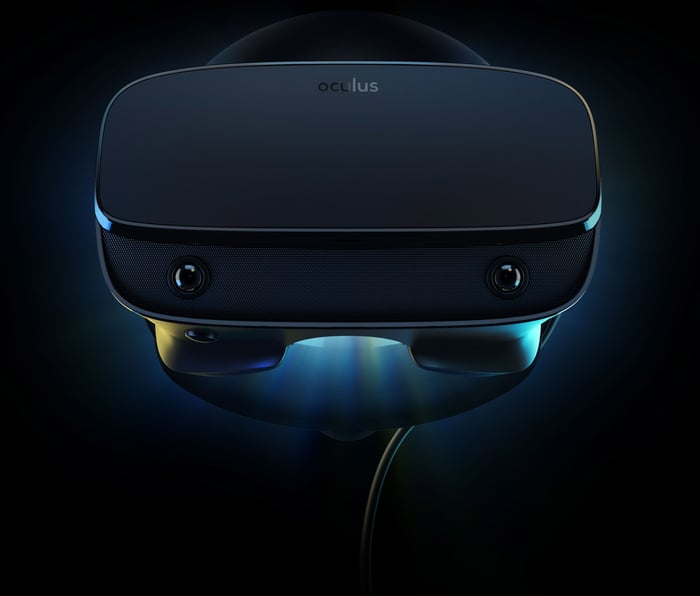 Surprisingly, the developers went with a slower frame rate for the Rift S: 80 Hz -- in other words, 80 frames per second -- compared to the original Rift's 90 Hz. Oculus is obviously confident that the move won't compromise the VR experience, but most high-end headsets today run at 90 frames per second. Time will tell if users find the difference noticeable.

From a cost standpoint, Rift S will be $400, the same as an Oculus Quest, and similar to the Rift model it's replacing. That seems to be the price point Oculus is targeting in its hopes of reaching a broader market than higher-cost devices.

The real benefit of Rift S right now is that it eliminates the external trackers. Instead, all the tracking cameras are built into the headset. That will make it much easier to get started -- just plug the headset into your computer, no cumbersome room setup required.

Adding to a platform

The Rift S may not sound like a big change from the original Rift, nor that different from the soon-to-arrive Quest, but it's an incremental improvement. And its inside-out tracking is the technological direction Oculus wants to move in over the long-term.

This strategy isn't without its risks. A number of key Oculus employees have headed for the exits this year, and it has been reported that many of them had been pushing for a bigger leap forward in technology to a Rift 2.0.

What will customers want in VR?

Oddly enough, Rift S doesn't seem to bring much to the consumer market that Oculus Quest isn't already promising to deliver without wires.

The Rift S may perform better for some games that require more-powerful graphics cards, and it won't be limited by a battery, but it's likely to be more of niche device in the VR market. Quest is going to be the device that will make or break Oculus, and that's the one investors should really keep their focus on.