The Oracle CEO's recent dismissal of the young database start-up could be worrisome for shareholders.

Two weeks ago, two database companies reported earnings: incumbent giant Oracle (ORCL 1.80%) and upstart MongoDB (MDB 6.52%). While Oracle's earnings and revenue beat expectations, its guidance was viewed by some as disappointing, and the stock hasn't done much since.

MongoDB, meanwhile, destroyed revenue and earnings expectations, posting an incredible 71% revenue growth rate, and the stock is up 78% on the year. 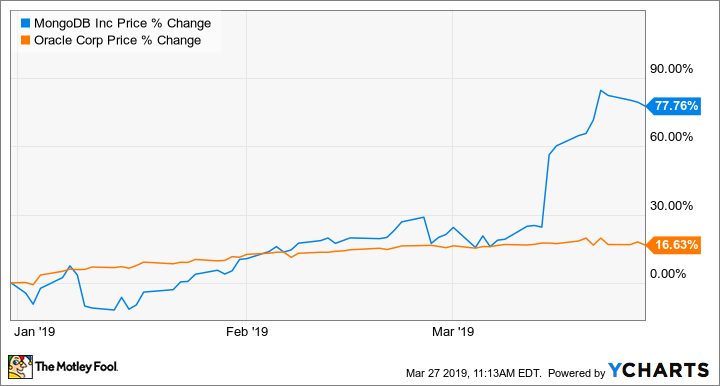 So, should Oracle be worried about this young, fast-growing company?

MongoDB's open-source database is built on a different technological architecture than Oracle's core relational database. The company's founders realized that legacy relational databases were frustrating to use in this new world of unstructured data, which doesn't necessarily fit into neat row-and-column formats. They, in turn, came up with a document-based database architecture, which is far more flexible. 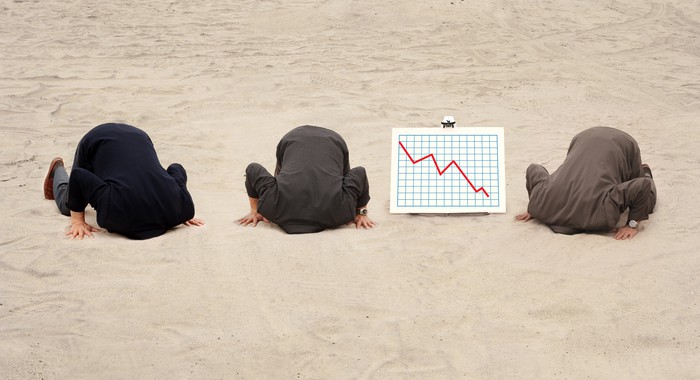 Does Oracle have its head in the sand about MongoDB? Image source: Getty Images.

After Oracle's earnings report, CEO Mark Hurd was interviewed on CNBC, where he was asked about MongoDB's assertion that legacy databases were built on "outdated technology."

Look at the numbers, right? I mean, look at our growth, you know, relative to the market growth. We have roughly 50% of the market. Every other database dollar is spent with us and if you look at -- don't even take one quarter, take 12 quarters, we're growing faster than the overall market, which is a $40 billion market. So we gained a bit of share, and we just introduced the most exciting database release that we've had in our history, which is autonomous database, which is going to bring a whole set of capabilities, from artificial intelligence actually being integrated into the database. So from a feature set perspective, whatever this guy is that you're talking about was saying, um, this is um, you know, I don't know -- 15 years, 20 years ahead of, sort of, that technology? So, you know, the best thing you can do when you get comments like that is, just look at the numbers and look at the facts, and see what they're telling you. And they tell you we're growing faster than the market and gaining share.

A couple of things stuck out to me in the above quote:

Embellishing on the third point, again, MongoDB's revenue grew 71%, accelerating over the prior quarter, while Oracle's overall growth rate was about flat. Getting into the Oracle's core database segment, Oracle's cloud services and license support segment, which includes both traditional and cloud database, grew just 1% last quarter, though 3% in constant currency, a deceleration from the previous three quarters.

Oracle also doesn't break out its on-premise database vs. cloud database revenue. Actually, it doesn't even separate database revenue from its other applications such as human capital management or enterprise resource planning software, which might make the skeptical investor wonder if Oracle is trying to hide something.

Even though Hurd says Oracle's revenue should accelerate in the back half of 2019 and 2020 as the autonomous database ramps up, it's still a far cry from MongoDB's disruptive 70%-plus rate from Q4. Also, MongoDB does separate out its on-premise revenue from its cloud Atlas product, which grew a whopping 400% last quarter. I imagine if Oracle had a product growing anywhere near that rate, management would be sure to call it out.

Check out the latest earnings call transcripts for Oracle, MongoDB, and Amazon.

Still, on pure revenue numbers, Oracle doesn't appear to have much to fear from MongoDB -- at least on the surface. Oracle has roughly $40 billion in revenue, about half that from its database business. In the meantime, MongoDB's trailing-12-month revenue is only $256 million, a little more than 1% of Oracle's database revenue. Oracle also faces competitive threats from the likes of Amazon.com (AMZN 1.96%), with its new database services, and other larger companies.

But in Clayton Christensen's 1997 book The Innovator's Dilemma: When New Technologies Cause Great Firms to Fail, he argued that large firms can get disrupted because they're hesitant to disrupt existing high-margin businesses (Oracle has operating margins of 35%), and thus ignore new technologies that have little immediate potential.

Could MongoDB take on Oracle more directly in the future? It's hard to say, but Hurd's comments remind me of ex-HBO CEO Jeff Bewkes dismissing Netflix (NASDAQ: NFLX) as "the Albanian army." While it's not easy to switch from Oracle's databases, like you would from a cable subscription, if I were an Oracle shareholder, Hurd's dismissive response would concern me.

Oracle Has Shocking News That You Should Know
401%