The world needs to invest a breathtaking $10 trillion in the coming years to replace the current carbon-based energy systems with renewables in the largest energy markets. While it's a daunting task, it also represents a once-in-a-lifetime opportunity for investors to make money from this transition.

Several companies have made it their entire focus to move the world toward a cleaner future. Three that these Motley Fool contributors think investors should keep an eye on are Pattern Energy (PEGI), SunPower (SPWR -0.93%), and Enphase Energy (ENPH 2.45%). Here's why there's a bright future ahead for these renewable energy stocks.

Now it's time to execute

Matthew DiLallo (Pattern Energy): Renewable yieldco Pattern Energy has encountered a few headwinds over the past year that it's working hard to address. One of them is that the company stretched its finances to make acquisitions while at the same time growing its dividend. That left it with little breathing room as interest rates started to rise, impacting its ability to raise outside capital to fund growth. Because of that, the company has had to press pause on dividend growth and sell some assets to shore up its financial situation.

While Pattern Energy is heading in the right direction, it still has a long road ahead of it. Last year, for example, it paid out 99% of its cash flow to support its 7.7%-yielding dividend, which is well above its 80% target. The company, however, believes it can grow into a more comfortable dividend payout ratio within two years by expanding its cash flow per share at a 10% compound annual rate over that time frame. Driving that view is the company's estimation that it can tap into a range of financing options to fund the acquisitions necessary to increase cash flow per share without negatively impacting its balance sheet nor diluting investors with additional stock sales.

It's an ambitious plan that looks achievable on paper. However, it will be harder to put into practice since the company doesn't have much room for error. That's why investors should keep a close eye on Pattern Energy's progress, especially over the next few months as it battles through some other headwinds even as it hopes to make another acquisition. If the company can get past this rough patch and deliver on its expected cash flow growth, it will be in a much stronger position to generate double-digit total annual returns in the future.

Jason Hall (SunPower): The past few years haven't been kind to SunPower or its investors. The high-efficiency solar panel maker, simply put, has lost a lot of money and burned through a lot of cash as it has struggled to find a profitable strategy. 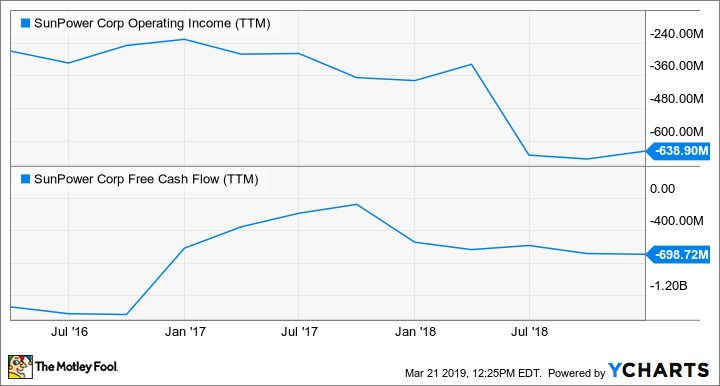 And all those losses have weighed heavily on SunPower's stock price, which has lost nearly 80% of its value over the past three years. In short, the company has struggled to compete against lower-efficiency panels that commercial and residential customers can buy at lower per-watt costs, and SunPower has spent a lot of money to bridge that gap in recent years, with little success so far.

The company recently announced a new strategy, which will focus on leveraging more partnerships for its manufacturing operations, as well as a new panel, its A-Series, which is larger and expected to be one of the most efficient it has made. The A-Series panel will be a larger form factor than other models, which should mean more power output and potentially lower installation costs. Furthermore, a bigger form factor for both the panel and the cells it is comprised of should also -- on paper, at least -- mean a more competitive cost on a per-watt basis.

There's no arguing that SunPower has been a technology leader in solar; there's also no arguing that it simply hasn't been able to compete with its commodity-priced peers in recent years or find an effective strategy so far. But if the two recent moves it's made pan out, that could change, and the big sell-off in its stock could turn out to be an opportunity. That makes it worth watching right now.

The hottest stock in solar energy

Travis Hoium (Enphase Energy): Two years ago, Enphase Energy was on the brink of collapse as it lost market share in the module-level power electronics business and bled cash. But the company's fortunes have turned and it now looks well positioned for long-term growth in the residential solar market. 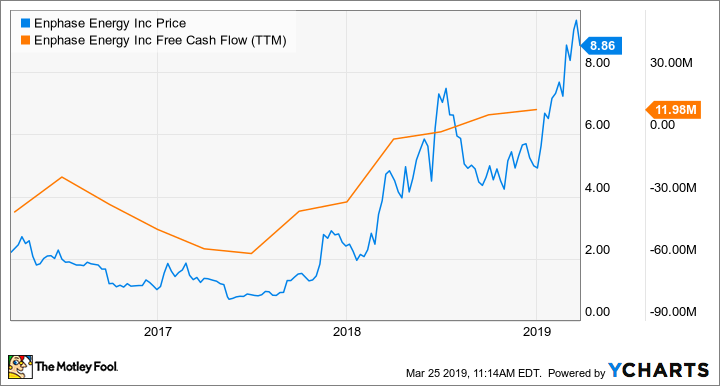 One of Enphase's first transformational moves was acquiring SunPower's microinverter business in exchange for becoming the company's solar microinverter supplier. The deal added $60 million to $70 million of new business that came with a hefty 33%-to-35% margin, according to management. From there, the company added more partners, including Panasonic's recently released AC Series solar modules.

Financially, Enphase Energy's business is improving quickly. You can see the improvement in free cash flow in the chart above, and the company recently paid off $39.5 million in a term loan that not only reduced debt, but freed up operations that had liens on them.

Module-level power electronics, which can safely turn off a solar panel without going to the roof, are becoming a requirement worldwide, which grows Enphase's potential market. And high-end solar manufacturers think the microinverter solution is better than power optimizers with a string inverter, the other option available to installers. Enphase Energy is the clear leader in microinverters, and if manufacturers continue to see the value in its products, the company could continue to be a big winner in solar energy long term.