On Monday, Apple (NASDAQ:AAPL) announced a new streaming TV subscription service called Apple TV+. While the tech giant did reveal an impressive cohort of producers and famous actors and actresses to help kick the service off, as well as an entertaining sizzle reel of upcoming shows for the platform, there were more questions than answers after the service was unveiled.

Some prominent questions about the service, which is slated to launch this fall, include:

But here's a question that doesn't need to be answered: Can Apple TV+ rival Netflix (NASDAQ:NFLX)? 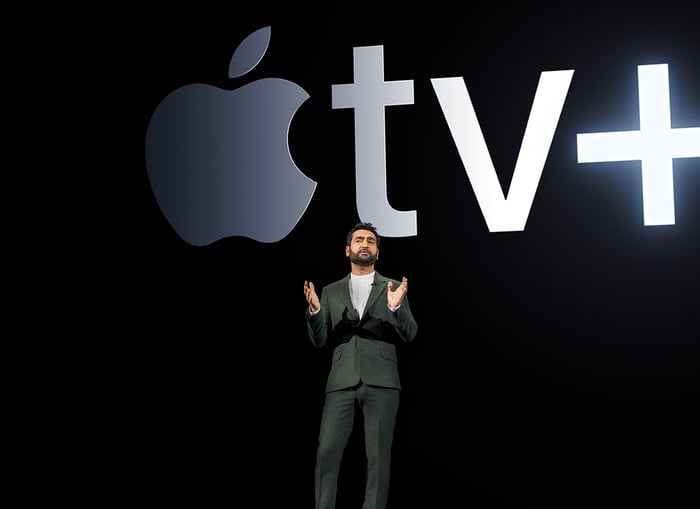 Fortunately, Apple doesn't need its streaming TV service to be the next Netflix in order to succeed. In fact, it doesn't even have to make money.

Thanks to Apple's diversified ecosystem, Apple TV+ doesn't have to be a huge hit. The tech giant's revenue is derived from a combination of hardware and an array of services, making any new service a small piece of the pie. Indeed, Apple launched three other services alongside Apple TV+: Apple News +, a new credit card, and gaming service. And these new services are built on some powerful existing services, including the App Store, Apple Music, and Apple Pay. While Netflix depends heavily on its platform's continued growth since it is a pure-play streaming platform, Apple has built an ecosystem model with a range of different services.

As famed investor Warren Buffett, whose Berkshire Hathaway (NYSE:BRK.B) (NYSE:BRK.A) owns 5.5% of Apple, said (via CNBC) during a talk this week at The Gatehouse's Hands Up for Success event about Apple's foray into streaming TV:

I'd love to see them succeed [in the entertainment space], but [Apple is] a company that can afford to make a mistake or two. You don't want to buy stock in the company that has to do everything right.

In addition, while investors should hope for the services Apple launches to be profitable (on a consolidated basis, they are extremely lucrative), they all don't have to contribute to its bottom line. Some services can simply play a role in making its ecosystem stickier, helping customers remain loyal and continue to buy Apple products and subscribe to various Apple services. If this is all Apple News+ achieves, it would arguably be a success.

Then there's Apple's conservative valuation. Trading at less than 16 times earnings, the company simply doesn't need new services to be runaway hits. The tech company already has a strong foundation of robust free cash flow and a diversified and rapidly growing services segment to justify its current valuation. If Apple TV+ can eventually rival Netflix -- or even smaller players like Amazon's Prime Video or Hulu (owned primarily by Disney) -- this would just be icing on the cake.