Please ensure Javascript is enabled for purposes of website accessibility
Log In Help Join The Motley Fool
Free Article Join Over 1 Million Premium Members And Get More In-Depth Stock Guidance and Research
By Lou Whiteman - Updated Apr 17, 2019 at 11:24AM

One of the company's largest gold mines is apparently nearing its end of life.

Shares of Sibanye-Stillwater (SBSW 1.55%) fell 9.9% on Thursday after the gold and platinum producer reportedly said it intends to eventually wind down operations at its massive Driefontein gold mine in South Africa.

Sibanye-Stillwater, which was formed via a $2.2 billion merger between Sibanye Gold Ltd. (under which you might still see the company's name listed on some stock price services) and Stillwater Mining, has been attempting to bring down the costs at mines that it says experienced financial losses in fiscal 2018. But the restructuring, which is expected to impact about 6,000 jobs, has drawn the ire of the Association of Mineworkers and Construction union (AMCU).

Earlier this month, Sibanye-Stillwater won court approval to proceed with the restructuring, which was to be focused around the company's Driefontein and Beatrix gold mines. The company, however, is still dealing with a strike at the mines. 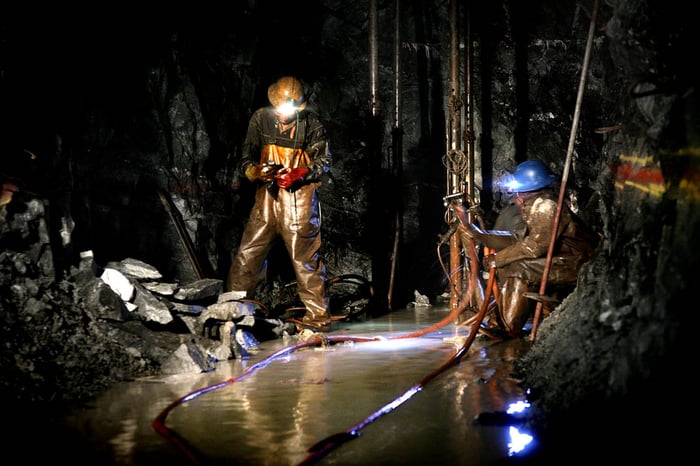 According to Bloomberg, Sibanye-Stillwater has decided that Driefontein is not worth saving. The report quoted Sibanye CEO Neal Froneman as saying that the weak investment climate in South Africa isn't "conducive" to spending the billions of rand that would be needed to deepen Driefontein and keep it producing.

The 2 mile-deep mine produced about 300,000 ounces of gold in 2018, just one-fifth of its peak output of two decades ago. Sibanye, according to the report, will wind down operations within 10 years, cutting jobs as it shuts unprofitable shafts.

Sibanye is not getting out of gold mining completely, although the company did say it is looking for opportunities in other sectors, including battery electric metals. There's at least a chance that the dramatic action at Driefontein could force the union to the table to help find ways to keep the company's remaining operations viable.

Sibanye-Stillwater shares are a better value after Tuesday's drop, but the company still has to grapple with high costs, operating issues, and the high debt load it's carrying as a result of the Sibanye/Stillwater merger.