2019 is going to be a down year for the company, but don't count on the bad times lasting.

Last October, the stock of Activision Blizzard (ATVI 1.29%) climbed to $84.50. The video game publisher's valuation had never been higher, and investors were looking forward to the promise of the company's consumer products division and initiatives like a push into television and film production.

Half a year later, the video game publisher's stock has lost nearly half its value, and the conversation has shifted to whether the company can kick-start its core business after sputtering earnings performance and threats from high-profile free-to-play competition like Fortnite.

News hit in February that the gaming giant would be laying off roughly 800 people -- reducing its workforce by about 8%. The company responsible for gaming franchises like Call of Duty, Candy Crush Saga, World of Warcraft, and Overwatch is trying to become leaner and more focused, but there will be some hurt in the short term. Management expects sales to dip 19.5% and earnings to fall 32% this year.

As a leading player in the fast-growing video game space, those aren't the kind of developments that investors have come to expect from Activision Blizzard in recent years. There are some big challenges ahead, but if you shift the perspective a bit, the company's future still looks very bright. 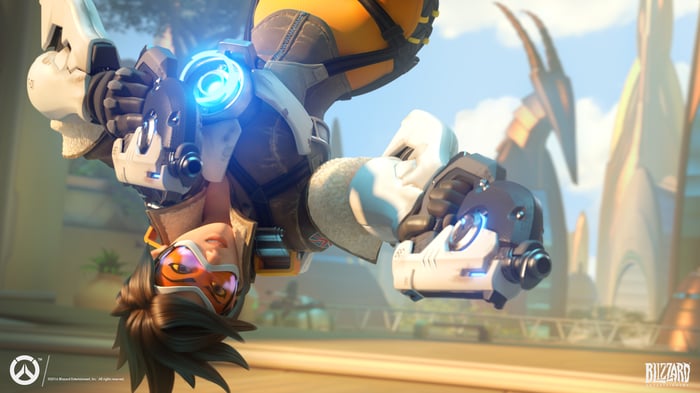 Here's why Activision Blizzard is under pressure

To understand why the best is still to come for Activision Blizzard, start with some of the catalysts that have hurt the stock's performance over the last year. The company's declining player base is one factor. There's been a significant drop in the monthly active user base, and continuing on this trajectory spells doom for the business. However, it's important to put the decline in context because a closer look at the trend highlights dynamics the can actually support the bull case for Activision Blizzard's long-term potential.

Monthly active users (MAUs) is a common metric in online content services like video games or social media, and it provides a good baseline indicator for how much use a platform or service is getting. The chart below tracks Activision Blizzard's quarterly monthly active users over the last three years. 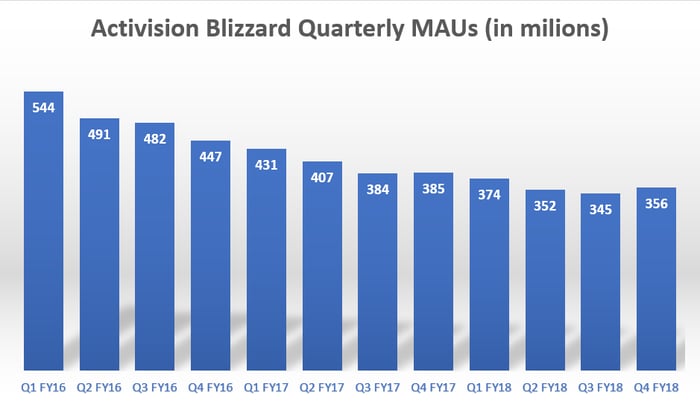 That's a pretty big decline across the stretch. But narrow in on what's happening at the operating-segment level. The business consists of three segments: Activision, Blizzard, and King Digital -- with the first two having mostly developed games for console and PC platforms, and King Digital having mostly concentrated on its mobile franchise Candy Crush.

The chart below tracks quarterly MAUs for games from the Activision and Blizzard segments of the business and leaves out the contribution of the King Digital segment. 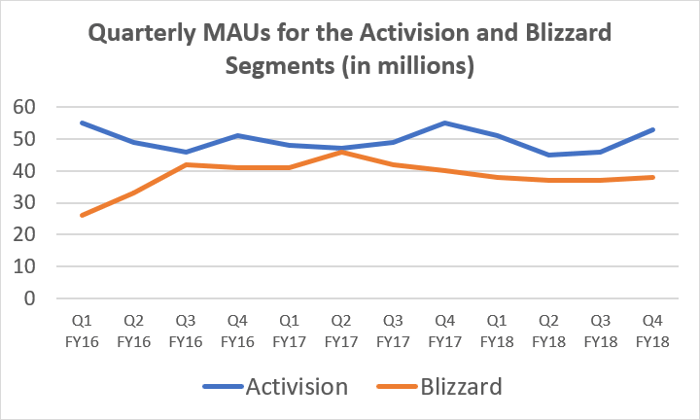 As the chart shows, there hasn't been a big drop for Activision and Blizzard monthly active users. Activision's quarterly MAUs were basically flat at the end of the three-year period -- as Call of Duty made up the core of performance and was supported by a rotating cast of franchises. Meanwhile, Blizzard's MAUs are currently down from their peak, but they ended 2018's final quarter at 38 million, up from 22 million in 2016's final quarter as Overwatch helped to offset the decline for World of Warcraft.

If that combined performance seems at odds with the company's huge MAU decline over the last several years, it's because the big user drop stems from the King segment, which saw its quarterly MAUs dip from 463 million players to 268 million across its first three full years since being acquired by Activision Blizzard.

Casual players abandoned the developer's Candy Crush Saga and other supporting titles. But the important part is that King Digital's revenue actually grew roughly 28% from 2016 to 2018 because highly engaged players stayed with its games and per-user spending increased. Across the same stretch, Activision revenue increased roughly 11% and Blizzard's revenue fell 8%.

The declining player base is something that Activision Blizzard needs to address (more on that in a bit), but the King segment leading the business' overall revenue growth highlights the importance of per-player engagement and sales. Even with the user-base erosion, Activision Blizzard actually managed to deliver record sales and earnings performance in 2018 -- a year that was relatively light on big releases. It was able to accomplish that because core player engagement stayed pretty strong.

Returning to the three-year comparison, the company's sales are up roughly 14% since 2016 and earnings per share are up 25%. That's not exactly break-neck growth over a three-year stretch, but it occurred even as total MAUs fell 34.5% -- highlighting the fact that industry trends like growth for digital distribution and in-game content sales have helped performance. It also suggests that Activision Blizzard has a highly engaged core audience that should serve as a good foundation to build on.

Activision Blizzard will continue to face some headwinds in 2019, but there's light at the end of the tunnel. Here's what investors need to know about the company's 2019 outlook and the pivot that will shape its next growth phase.

Despite Blizzard growing its active user base, sales at the segment have fallen over the last three-year period, once again because of the importance of per-user revenue. Blizzard's World of Warcraft launched in 2004 and was the last online role-playing game to find big success with the monthly-subscription-based sales model. World of Warcraft probably still has about 5 million monthly subscribers -- the vast majority of whom are paying between $13 and $15 monthly to play the game. Barring a dynamically successful reinvigoration for the game, that's a high-margin sales stream that will likely continue to decline over the long term. 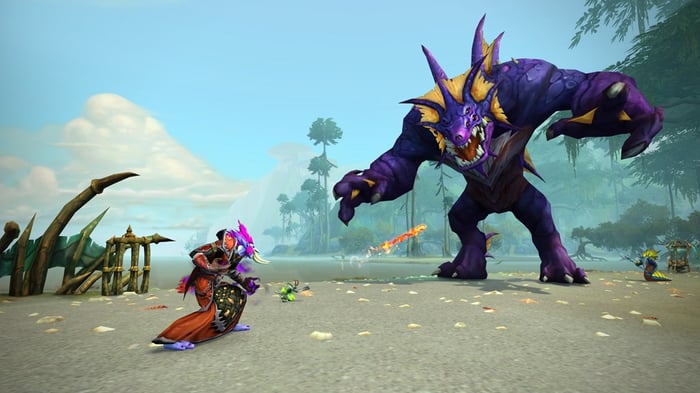 A screenshot from World of Warcraft. Image source: Activision Blizzard.

Warcraft isn't the only big game that's slipping. Blizzard titles like Overwatch and Hearthstone have also recently seen per-player sales declines despite smaller drops for active users. And at the Activision segment, investors should be prepared for some negative sales impact from the company ending its relationship with game developer Bungie and dropping support for the Destiny franchise they had partnered on.

So some key Activision Blizzard franchises are seeing less spending from players, and the company hasn't released new properties to dramatically expand its player base. But that's going to change pretty quickly.

Activision Blizzard is prioritizing bringing more of its big console and PC franchises to smartphones and tablets. The push into mobile will rapidly fix the company's user base problem, and shareholders can look forward to those MAU numbers seeing big growth over the next five years. Investors could see a return to MAU growth this year, kicking off with the launch of Call of Duty Mobile at a currently unspecified date.

Console and PC platforms will still be important, but the company's ramped-up mobile initiative is going to play a huge role in pushing the company to new heights.

Mobile is the path to global expansion

The video game industry has seen impressive growth over the last decade thanks to the rise of mobile platforms, digital distribution, and international expansion. And far from being tapped out, Activision Blizzard is just beginning to broaden the reach of its games around the globe.

Its Asia Pacific geographic segment accounted for just $1 billion of the company's $7.5 billion in net revenue across 2018. Putting that in perspective, China's total games industry alone was worth roughly $34 billion in 2018, and gaming research firm Niko Partners projects that annual sales in that country will hit $42 billion in 2022. There's still huge expansion potential for Activision Blizzard in China and other international markets.

Right now, the company is working on casting a wider net -- prioritizing mobile development and bringing its big franchises to smartphones because that's the platform most used by players in India, China, and other high-growth Asian markets. A long-term trajectory that sees an expanding global middle class is one that also sees billions of potential new players for Activision Blizzard, and it's making smart moves to take advantage of that opportunity. 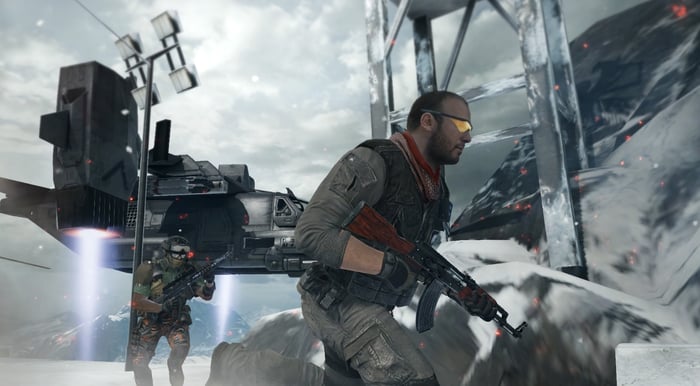 The company has partnerships with NetEase, a developer that it has teamed with for the upcoming Diablo Immortal, and Tencent, which is handling most of the development for Call of Duty Mobile. China requires that foreign games companies partner with local ones in order to release titles in the market, and teaming up with NetEase and Tencent should help ensure that Activision Blizzard is able to make its franchises available to the country's roughly 700 million internet users.

Activision Blizzard could add hundreds of millions of MAUs over the next five years, and it also has the opportunity to create a favorable catalyst for per-user revenue as it introduces advertisements in games. This new sales stream could help leverage players who wouldn't otherwise spend on in-game items or currencies. The company's ad-based business is still in its very early phases, but it's expected to record over $100 million in bookings in 2019, and it could scale dramatically over the long term. Pushes into fields like esports should also widen the company's audience and increase per-user revenue.

A long-term winner at an attractive price

Activision Blizzard has a market capitalization of about $34.5 billion, and trades at roughly 21 times the company's 2018 free cash flow and 21 times this year's expected earnings. The publisher sports a solid balance sheet -- roughly $4.2 billion in cash against debt of about $2.7 billion -- and it looks attractively valued in the context of the business' growth prospects, sound financial position, and strong management.

It's worth noting that the company's management has seen some recent shake-ups, with two CFOs departing and new presidents coming on board for the Activision and Blizzard segments this year. But it should also be said that the business historically has been well run, and CEO Bobby Kotick has proven to be a savvy leader who is in tune with the rhythms of the industry.

From the successful merger of Activision and Blizzard in 2008, to the acquisition of King Digital in 2015, to buying back Vivendi's stake in the business at a steal of a price, there are a range of managerial successes worth lauding in addition to the creative side's long string of successful games.

The plan: Cast a wider net and increase engagement among an expanded user base with incremental content updates. Count on Activision Blizzard to be successful with this. There's still promise in the company's long-term goals of building a media business that includes film and television segments and bigger merchandising and licensing components -- but the publisher needs to get its foundations in order. Things are heading in the right direction.

Activision stock stands out as a buy as the company embarks on its more concentrated push into mobile and readies the games and content updates that will power the next stages of its growth. The market for interactive entertainment is still young, and investors would be wise not to bet against Activision Blizzard leveraging its position in the space to create a lasting multimedia empire.