Not everything went according to plan for Tiffany (NYSE:TIF) in fiscal 2018. The jewelry giant recently announced its best year of sales since 2014, but that good news was paired with less-encouraging trends such as reduced profitability and slowing revenue gains in the year's final months.

In a conference call with Wall Street analysts, CEO Alessandro Bogliolo sought to put those disappointments into perspective while explaining why he and his team believe Tiffany will notch a second straight year of record sales in 2019. 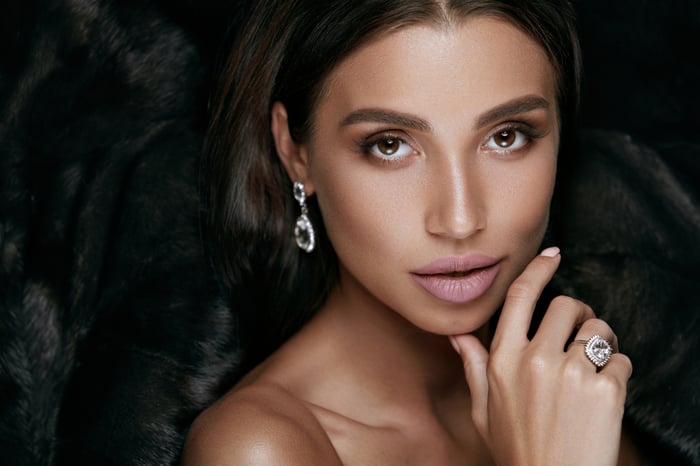 1. It was a mostly strong year

Tiffany's 6% sales growth for the full year landed just below the high-single-digit range that management had been predicting. The slowing demand trend is clear from the big-picture growth metric. Sales dipped into negative territory in the holiday season after having risen 5% in the prior quarter and 7% in the fiscal second quarter.

Executives chalked the weakness up to unpredictable external factors -- especially volatile demand from Chinese tourists visiting major world capitals. In that way, the slowdown doesn't demonstrate any loss of competitive edge, according to management. "I believe it is more productive to focus on the [rebound] journey that we started exactly one year ago," Bogliolo said, when Tiffany had just closed a difficult fiscal 2017. Since then, sales and gross margin trends have improved.

2. There were financial wins

Across our key financial performance indicators, I think it is fair to say we delivered what we set out to achieve.

Earnings landed at $4.75 per share, well above management's initial forecast for the year and near the high end of its most recent forecast. The retailer spent aggressively in areas like marketing, store remodels, and the digital sales channel. And those investments pressured bottom-line results. Yet Tiffany met most of its big-picture financial goals, including on cash flow and operating profit. And with nearly as much cash on the books as total debt, "our balance sheet remains a major source of strength and flexibility," Erceg said.

3. Another record year ahead

We expect sales in the first half to be adversely affected by several factors: a meaningful [foreign exchange rate] headwind, lower foreign tourist spending, and a difficult comparison to strong base-period comps.

Tiffany's 2019 outlook didn't give investors much to look forward to until at least the second half of the year. Management thinks the first six months will see the same negative trends that hurt results over the holidays. Specifically, sales growth will be muted, and earnings will likely decline.

Looking further out, though, the company is targeting a return to operating-margin growth despite a few temporary spending pressures, including the multiyear remodel of its flagship New York store. Tiffany also sees sales gains speeding up in the third and fourth quarters to help deliver a second straight year of record results.

Investors were right to demonstrate a cautious view on that outlook by sending shares lower immediately following the earnings report. The retailer's profit prediction looks achievable, after all, but its sales pace looks anything but stable after worsening for several consecutive quarters. Thus, shares might not post a sustained rebound until Tiffany can show that it has put its recent demand struggles behind it.