The high-volume restaurant chain should return to form with positive comps for Tuesday afternoon's quarterly report, but everything isn't rosy in the Million Dollar Midway.

Dave & Buster's Entertainment (PLAY -1.19%) had a good start to its holiday quarter, and come Tuesday afternoon we'll know if things ended as strongly as they started. The "eatertainment" chain that combines casual dining with video arcade games in a big-box setting reports fiscal fourth-quarter results shortly after Tuesday's close.

Analysts aren't holding out for much with the fresh financials. They see revenue rising 6% to $323.3 million, its weakest top-line growth since 2013. Wall Street pros see earnings moving slightly higher, rising from $0.61 to $0.63 a share. 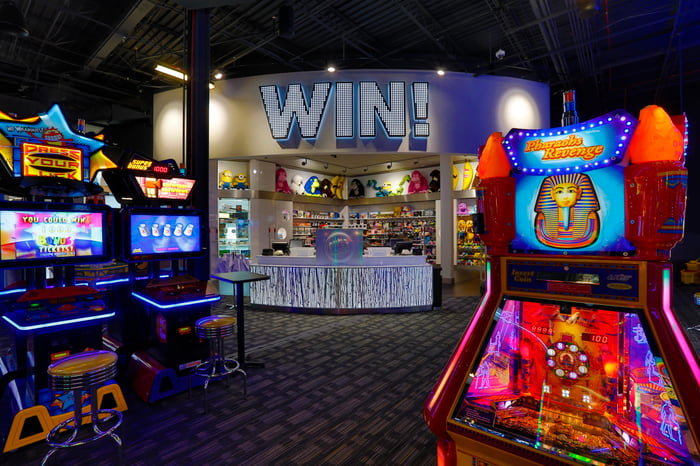 It's time to play the game

Dave & Buster's stock moved higher in mid-January when it reported a better-than-projected start to its quarter. The 124-unit chain turned heads when it announced that same-store sales were trending to rise 1.8% to 2.5% for the quarter ending Feb. 3. This may not seem like much of an increase, but it positions the concept to reverse its previous streak of five straight quarters of negative comps.

It was an encouraging update, improving the bleak full-year outlook that Dave & Buster's had provided just a month earlier. Dave & Buster's would no longer be modeling a decline in the "low single digits" for all of fiscal 2018.

The return to positive comps -- something that should be confirmed tomorrow -- isn't a surprise. Same-unit sales plummeted 5.9% a year earlier during the same quarter, making it an easier comparison this time around. Slower overall growth is just the byproduct of Dave & Buster's easing up on its expansion and shifting to smaller markets, where smaller spaces make more financial sense.

Dave & Buster's bullish update in mid-January, when it was roughly two-thirds done with the reporting period, may suggest a strong report tomorrow, but the stock has actually moved lower since the initial pop following the rosier guidance. Wall Street's also getting cold feet. SunTrust analyst Jake Bartlett lowered his price target on the shares four weeks ago, concerned about headwinds that include smaller "eatertainment" chains. Dave & Buster's isn't just competing against other venues that combine dining with state-of-the-art video games. High-end bowling alleys, golf putting ranges, and even trampoline parks are competing for the same well-heeled young professionals looking to blow off some steam at the end of the day.

Bartlett stuck to his bullish rating on the stock. He sees an opportunity for comps to start rising again, and as far as publicly traded restaurant chains, it will continue to be one of the faster growing players in the field. However, slashing his price target from $69 to $61 is a serious blow to the perceived confidence here. Dave & Buster's is on the clock, and it's a game that bulls can't afford to lose.