Shares of Delta Air Lines (NYSE:DAL) jumped more than 5% on Tuesday morning after the company upped its forecast for first-quarter adjusted earnings and announced an 11-year extension of its credit card deal with American Express. The airline said a combination of healthy demand and lower-than-expected fuel costs were driving its performance gains. Delta expects revenue to grow about 7% in the quarter, and expects non-fuel unit costs to be anywhere from flat to up 0.5%, versus initial guidance of up 1% to 2%. It attributes this to cost control efforts, the timing of certain expenses, and the airline's strong completion rate during the quarter.

Delta and American Express also announced an extension of their credit card agreement through 2029. Delta said that new deal would provide a slight positive benefit to total unit revenue in the quarter.

Delta has been an industry leader throughout this economic cycle, and these latest results are an indication that the company is still executing well. Despite its strong performance, the company still trades at a multiple of earnings well below that of its rivals. 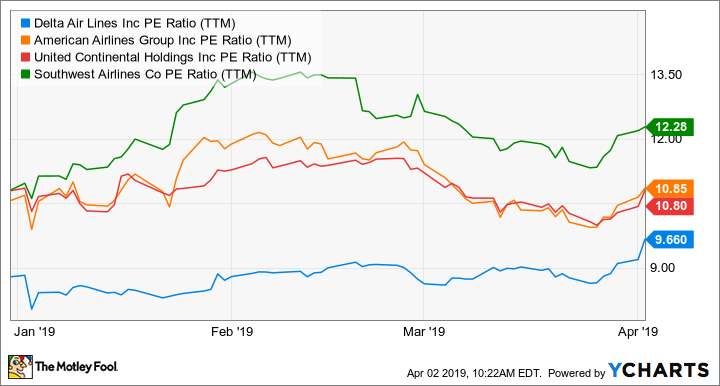 Delta's outlook stands in contrast to the forecasts of more leisure-focused airlines including JetBlue Airways (NASDAQ:JBLU) and Alaska Air Group (NYSE:ALK), which both reduced first-quarter guidance last month. For investors questioning whether that weakness was more company-specific or a sign that the broader U.S. economy is slowing, Delta's guidance is good news.