Please ensure Javascript is enabled for purposes of website accessibility
Log In Help Join The Motley Fool
Free Article Join Over 1 Million Premium Members And Get More In-Depth Stock Guidance and Research
By Matthew DiLallo - Apr 3, 2019 at 8:18AM

The midstream company wants to export more hydrocarbons to the country.

Energy Transfer (ET 0.40%) sees a bright future in exporting energy products, especially to China. That led the midstream giant to open an office in Beijing, which is its first one outside the United States. The move will enable Energy Transfer to market energy products to China and other Asian countries as the company ramps up its export activities.

Energy Transfer currently operates two major export complexes. Its Nederland Terminal is a 1,200-acre site on the U.S. Gulf Coast capable of exporting 1.5 million barrels of oil per day along with 200,000 barrels of natural gas liquids (NGLs) such as propane and butane. In addition, the company owns the 800-acre Marcus Hook Industrial Complex on the East Coast, which can export 280,000 barrels of NGLs per day. 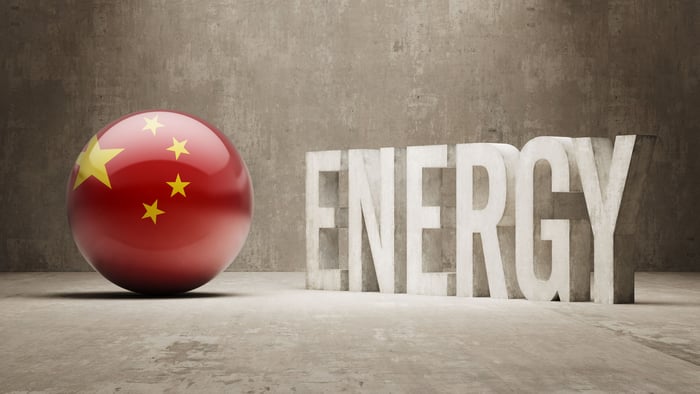 Meanwhile, the company has two more export projects in the pipeline. Last March, it formed a joint venture with China's Satellite Petrochemical Corp to build the Orbit terminal. The U.S. Gulf Coast facility will export ethane produced by Energy Transfer's fractionators in Mont Belvieu, Texas, that separate raw NGLs into higher-valued products like ethane and propane. The facility will store and load ethane onto ships, where it will head to Satellite's petrochemical facilities in China. The company expects this project to start up by the end of next year.

Energy Transfer is also working with energy giant Royal Dutch Shell (RDS.A)(RDS.B) to build an LNG export facility in Lake Charles, Louisiana. The companies recently formalized their partnership, which would see Shell develop the facility and market the LNG while Energy Transfer will focus on leveraging its pipeline infrastructure to supply it with natural gas. If all goes according to plan, the facility could start up in late 2024 to early 2025.

Energy Transfer is hoping that by setting up shop in China, it will have a competitive advantage over rivals so that it can secure more contracts to export hydrocarbons to the country. That could enable the company to expand its existing facilities as well as build new ones.

Racing to build export facilities as fast as they can

Energy Transfer is just one of many energy companies working to expand America's export capacity. Several companies have proposed constructing new crude oil export facilities along the U.S. Gulf Coast. There's so much competition for barrels that energy infrastructure giant Kinder Morgan (KMI 2.12%) recently walked away from a project developed by Canadian oil pipeline powerhouse Enbridge (ENB 0.96%). While Enbridge still plans to move forward with that project, it's behind rivals that are farther along in the process.

Meanwhile, energy companies have a boatload of LNG export projects either under construction or in development. Kinder Morgan, for example, is currently in the process of starting up its Elba Island LNG facility near Savannah, Georgia, while Sempra Energy (SRE 0.82%) is building its Cameron LNG project in Lousiana. Others are following behind as ExxonMobil and Qatar Petroleum, for example, recently sanctioned their Golden Pass LNG project in Texas while Shell approved its LNG Canada project on that country's west coast. Several other projects are lining up behind those, including NextDecade's Rio Grande LNG, Tellurium's Driftwood LNG, and Sempra Energy's Port Arthur project in Texas and Costa Azul in Mexico. If Sempra Energy builds all its facilities, it will become the second largest LNG exporter in North America.

While China and other developing countries in Asia have a voracious appetite for hydrocarbons to fuel their fast-growing economies, it's unlikely enough to support all the proposed export projects. That's why Energy Transfer is looking for ways to get an advantage over rivals so that it can secure the contracts needed to expand its export capabilities.

While China's energy demand growth rate is expected to slow in the coming years, its dependence on imports will continue increasing at a healthy pace. Because of that, energy companies in the U.S. are working hard to become key suppliers to that country. Energy Transfer hopes that it's one of them, which is why it wants to improve its relationships with companies in that country to enhance its chances of securing contracts to supply it with energy. That move might tip the scales so that it can move forward with additional export-focused expansion projects.