Shares of heating, ventilation, and air conditioning (HVAC) company AAON (NASDAQ:AAON) rose 15.9% in March, according to data from S&P Global Market Intelligence. The move continues a strong run for the stock, which is now up more than 30% on a year-to-date basis.

A quick look at the price chart reveals a steady uptrend in March, and the earnings report at the start of the month helped. However, it's hard not to think AAON's stock price is being supported by a fair amount of takeover speculation. After all, it trades at a forward P/E of more than 36. 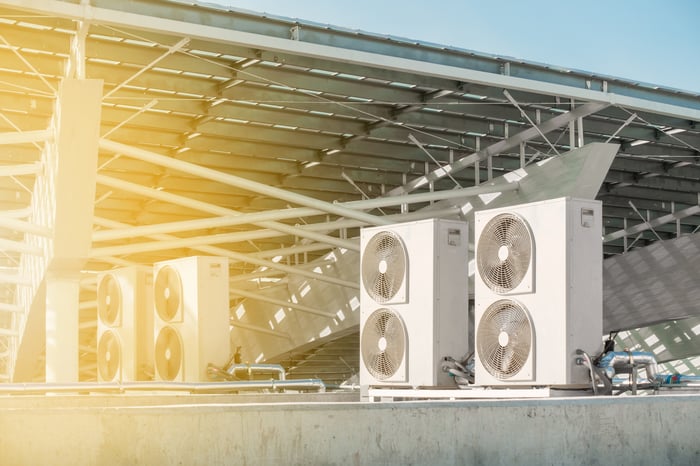 AAON is a small company competing in the commercial HVAC market with some much larger competitors, including Lennox International, Johnson Controls, Ingersoll-Rand, and United Technologies' (NYSE:RTX) Carrier. There are three key reasons the company could be taken over.

First, AAON's market cap of $2.4 billion is unlikely to deter its larger peers. Second, its position as a premium provider of commercial HVAC makes it attractive as a bolt-on acquisition for a larger company because it brings good exposure to the replacement market -- a good place to be if the economy starts to slow. Moreover, there's likely to be less cannibalization of sales of an acquirer, because AAON trades at the premium end of the market.

The third point, and arguably the most important, is that the industry is ripe for consolidation.

The takeover talk isn't just hot air. For example, Johnson Controls is selling its power solutions business partly to "capture strategic opportunities in the HVAC industry," according to CEO George Oliver in a press release. Meanwhile, Carrier will be spun off from United Technologies, and its management will now have more latitude to make portfolio changes in the future.

In addition, when Ingersoll-Rand CEO Mike Lamach was asked about industry consolidation during a conference at the start of March, he said he believed it could come over time but would probably be focused on small HVAC companies.

Putting potential bid talk aside, AAON is planning on a return to what management calls "normal levels" of gross profit margin in 2019, following a year when it declined to 23.9% from 30.5% in 2017 -- something CEO Norman Asbjornson put down to "labor issues and increased costs in raw materials." In addition, he said, the fourth quarter was affected by "production inefficiencies."

Asbjornson believes a combination of price increases and management initiatives will address these issues, but it's still in the early days. No matter, though: The market is giving AAON the benefit of the doubt, and given the potential or consolidation in the industry, the company is a viable candidate for a takeover.