Uber still dominates the market, but it's losing market share to Lyft.

After popping on its first day of trading, Lyft's (LYFT -8.05%) stock slumped last week, partly due to concerns about its widening losses and high valuation. Lyft controls a lower percentage of the U.S. ridesharing market than rival Uber, according to Second Measure. However, it's been gradually gaining ground against Uber in recent years. 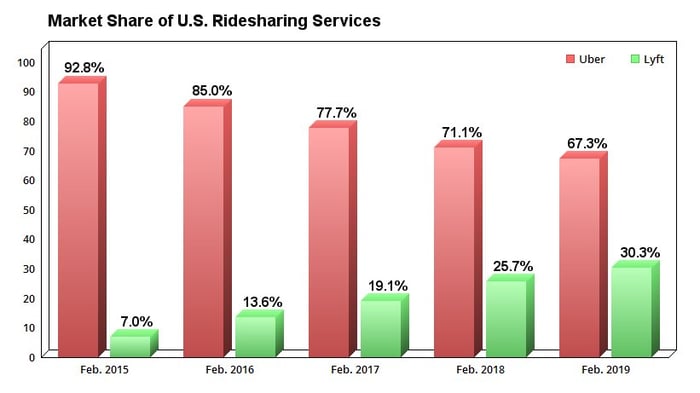 Lyft is still growing. Its number of riders who take a least one ride per quarter surged 48% year over year to 18.6 million in the fourth quarter of 2018. It doubled its revenue to $2.2 billion for the year.

However, Lyft's net loss increased 32% to $911 million in 2018, due to the rising costs of maintaining its digital platform, launching marketing campaigns, and paying its drivers. That loss could widen, as Lyft and Uber both face strikes over low wages, and a pricing war seems inevitable.

Lyft and Uber both want to run fleets of autonomous cars and eliminate Americans' dependence on personal vehicles. Yet driverless cars still aren't ready for public roads, and it's unclear if ridesharing services will convince Americans to give up their vehicles. But for now, consumers could benefit as the battle between Lyft and Uber escalates.