An analyst warns that the company will be ill-prepared for a tsunami of new competition coming on line.

Shares of U.S. Steel (X 1.96%) lost 10.1% on Tuesday after an analyst downgraded the stock on fears that the company will be unable to compete against rivals as new capacity comes on line in the years to come.

Before markets opened on Tuesday, Credit Suisse analyst Curt Woodworth downgraded U.S. Steel to underperform from neutral and lowered his price target to $13 from $21. In a research note, Woodworth said he's concerned the company will be ill-prepared to compete as a "tsunami" of new flat-rolled competition enters the market in 2021 and 2022. 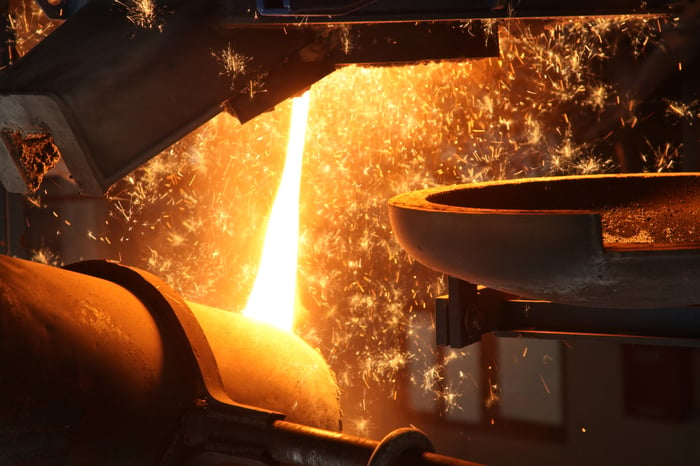 It's been a little more than a year since a 25% tariff was implemented on much of the steel imported to the U.S., and the controversial policy has produced higher profit margins at U.S. Steel and other domestic manufacturers. But it has also led lower-cost producers including Nucor and Steel Dynamics to expand, which could lead to a glut of capacity in the near future.

Woodworth is worried that U.S. Steel's step-function rise in unit costs over the past several years, coupled with its loss of automotive share, suggests the company won't be able to compete as more product hits the market.

The tariffs seem to have succeeded in at least temporarily bringing domestic U.S. prices up, but the long-term ramifications are still playing out. In addition to being concerned about increased competition, investors in U.S. Steel and other steel companies need to hope that the higher steel prices will not cut into demand, and that retaliatory tariffs won't slow the U.S. economy.

No matter what the future holds, U.S. Steel figures to have a difficult time competing against the likes of Nucor and other low-cost operators. Woodworth's warning seems well advised.