A Whole Foods Market Daily Shop that was recently opened in Manhattan's Chelsea neighborhood may be Amazon.com's (NASDAQ:AMZN) best alternative concept yet for the organic grocer. Although many are likening it to a bodega -- those all-night, corner store establishments that are fixtures of New York City -- in reality the new Whole Foods convenience store is much too modern and upscale to be viewed in the same light.

While the Daily Shop sells some bodega staples -- such as coffee, bagels, and a limited selection of grocery items -- you'd be hard-pressed to find acai bowls, kombucha on tap, and trendy mochi-rice-ball-and-ice cream confections served at such traditional mini-marts. Plus, this new store has self-checkout registers and bar seating where customers can sit and eat, according to Eater.

Think of it more as an upscale 7-Eleven or a sibling to the cashierless Amazon Go convenience stores, though the Daily Shop has self-check kiosks rather than machines that track you, total up your bill as you shop, and charge your account when you walk out the door. However you'd describe it, the new grab-and-go shop shows Amazon is continuing to think about how best to tackle the physical retail space. 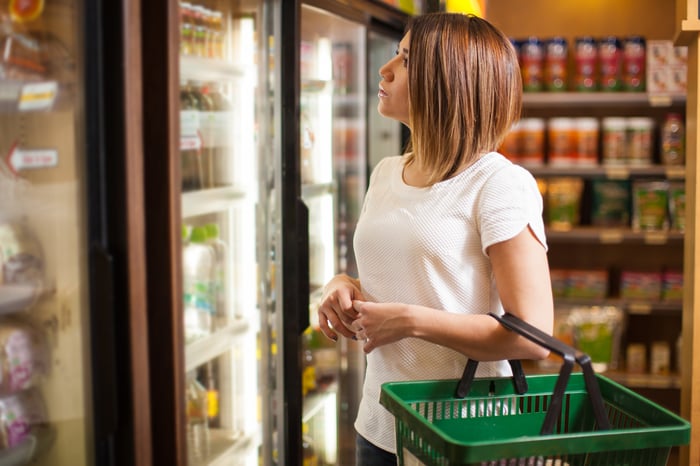 A woman shopping in a store. Image source: Getty Images.

At a competitive disadvantage

Amazon may have given up on trying to convince consumers that Whole Foods is anything but a high-priced organic grocer (though it just announced a new round of price cuts at Whole Foods), but the sustained experimentation it is conducting with different formats indicates it fully believes the supermarket chain can be a profitable, growing business.

Where Whole Foods used to be located only in affluent neighborhoods, Amazon is embarking on bringing the chain into the suburbs, and this convenience-store variant may indicate it wants to be found in more urban areas, too, allowing it to more effectively compete against Walmart (NYSE:WMT).

While Amazon developed a leadership position in online grocery sales, Walmart remains dominant in the physical space, which partly explains Amazon's desire to vastly increase the number of physical locations it operates, whether they are Whole Foods stores; Amazon Go convenience stores; a new, as yet unnamed grocery store chain it's reportedly working on; or its specialty outlets like Amazon 4-star and Amazon Books.

Walmart meanwhile is investing heavily in e-commerce, and credits its own online grocery business with driving digital sales 43% higher in the fourth quarter. It believes online grocery shopping combined with pickup and delivery will be a major growth opportunity and plans on doubling the number of stores offering same-day grocery delivery this year to 1,600. It is also adding grocery pickup to another 1,000 stores, bringing the total offering that service to 3,100.

A better chance of success

Amazon does have plans to scale up its brick-and-mortar presence, preparing to build out as many as 3,000 Amazon Go convenience stores, as well as reportedly launching an entirely new supermarket chain independent of Whole Foods. Yet those goals are not easily achieved, nor done cheaply.

In the case of the cashless Amazon Go convenience stores, Amazon is running into roadblocks from politicians opposed to a store that takes only a form of payment not everyone has and that not everyone wants to have. Philadelphia just became the first major city to ban cashless stores, while New Jersey became the second state behind Massachusetts to do so. Other cities and states might join in as well, limiting the concept's potential.

But the Whole Foods Market Daily Shop convenience-store concept wouldn't face that particular hurdle and that type of shop could be used as an adjunct to Amazon's broader e-commerce business, providing pickup points for packages.

Although just a single store at the moment, by getting closer to where more consumers live, and providing them more ways by which to access its stores -- a key consideration for the urban consumer -- the Daily Shop concept could bolster what has so far been a relatively lackluster performance by Amazon's physical retail segment.

It would also provide a more cost-effective way for building out a larger footprint than the technology-laden Amazon Go stores it intends to develop.

Amazon has shown a propensity for testing new ideas, and abandoning them if it's not getting a good return on its investment. This new Whole Foods convenience store could be one that the company is able to build on and grow.