Its guidance hit a jackpot with investors.

Shares of Everi Holdings (EVRI -0.72%) gained 36.8% in March, according to data from S&P Global Market Intelligence. The casino gaming and fintech stock climbed following the release of better-than-expected fourth-quarter results that the company paired with promising guidance and acquisition news. 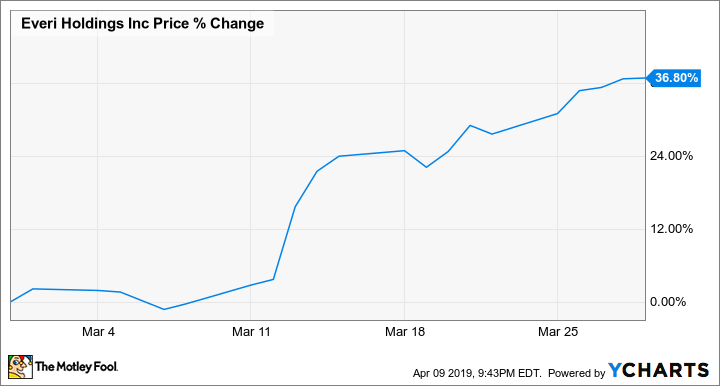 Everi published fourth-quarter results after the market closed on March 12, delivering sales and earnings that beat the average analyst targets. The company's adjusted loss per share for the period came in at $0.04, a penny better than the midpoint analyst target. Revenue for the period increased roughly 14% year over year to come in at $119.5 million, topping the average analyst estimate for sales of $114.2 million.

Everi continues to look for new acquisitions that can complement its business, and the company revealed that it has purchased casino gaming kiosks and software technology from Atrient in a $40 million deal. Everi expects that the Atrient assets will also be a benefit for its fintech initiatives.

Everi's fourth-quarter sales and earnings beats and new tie-in assets were welcome developments, but management's guidance for 2019 was even more encouraging. The company expects its adjusted EBITDA will see immediate benefits from the Atrient deal and come in between $252 million and $255 million -- representing growth of roughly 394% year over year at the midpoint of the target.

Everi stock has given up a bit of ground in April, with shares trading down roughly 6.4% in the month so far. 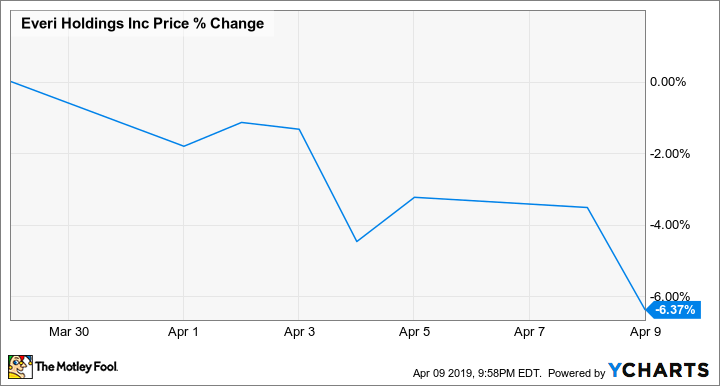 Everi stock has been a big winner recently, climbing more than 360% over the last three-year period. The company is expected to post strong earnings momentum, but strong performance is also already priced into the stock with shares trading at roughly 86 times this year's expected earnings.

Why Everi Stock Jumped on Tuesday

Hit the Jackpot With This Small-Cap Growth Stock