While fans flock to see the premium cable show, they seldom keep subscribing once the season ends.

The long-awaited eighth and final season of HBO's megahit Game of Thrones will premiere on Sunday, April 14, and the buzz among fans is palpable. There's little doubt that the show, based on a series of books by George R.R. Martin, is the crown jewel of HBO's lineup. The fantasy drama has been among the most successful series ever for HBO, garnering a 94% Fresh rating from review aggregation site Rotten Tomatoes.

The fan frenzy is good news for investors in AT&T (T 1.84%), which gained control of HBO with the acquisition of Time Warner late last year. HBO Now typically sees a surge in subscriber numbers in the days and weeks leading up to each season's debut, as fans binge to catch up on the most recent episodes in anticipation of the premiere.

Unfortunately, if history is any indicator, the good times will be fleeting. Does the finale of Game of Thrones spell trouble for HBO? Image source: HBO.

Data shows that, while fans flock to HBO in advance of each new season of Game of Thrones, they rarely stick around for very long after the finale.

When season seven debuted in 2017, subscriptions to HBO Now jumped by 91% in the U.S., according to data from consumer behavior measurement company Second Measure. This was a massive spike compared to the tepid growth that occurred in the months leading up to the season premiere. Unfortunately, nearly all of the new subscribers vanished over the six months following the season finale, the report said.

That wasn't an isolated incident. Game of Thrones saw a similar spike corresponding with the debut of season six, as subscribers nearly tripled during the season. After the June finale, however, viewers made a beeline for the exits, with subscriber numbers falling by 39% by September. The data also revealed that only 26% of viewers that signed up during season seven of Game of Thrones were still HBO Now subscribers six months later. 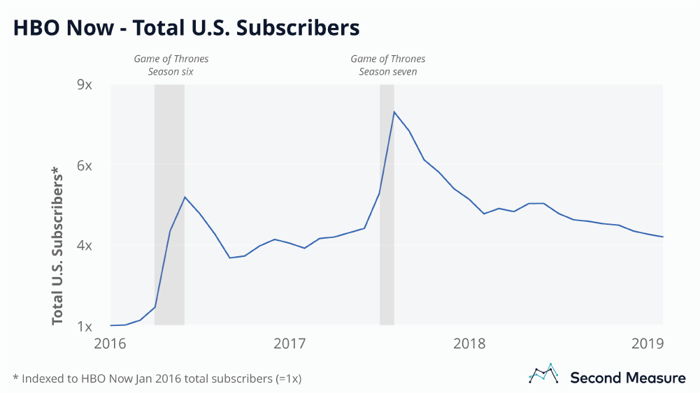 Having a single show drive massive subscriber gains and desertions is an unusual phenomenon among streaming services. As an example, Netflix (NFLX 5.03%) didn't see a noticeable gain or loss of memberships surrounding the release of either season of its hit show Stranger Things.

With the swan song of Game of Thrones upon us, this represents a distinct long-term challenge for HBO, as viewers that tuned in just for the soon-to-be-ending series may be gone for good.

This is just the latest bit of turmoil at the cable channel since AT&T became HBO's corporate overlord. Earlier this year, the company dropped a bombshell when it announced that Richard Plepler -- a fixture at HBO since 1992 and head of the channel since 2013 -- would be stepping down. Plepler's uncanny ability to green-light massive hits like Game of Thrones has been credited with HBO's surging popularity.

The high-profile defection comes as AT&T execs are working to make HBO more competitive with Netflix. The ink on the company's acquisition of Time Warner was barely dry when AT&T announced that it would change the winning strategy that helped make HBO the king of cable television and ask the unit to pump out more content. AT&T exec John Stankey, who now heads Warner Media, announced the company was making changes because HBO wanted more "hours a day...not hours a week" from its viewers.

HBO has had a string of hit shows stretching back decades, including The Sopranos, The Wire, The Larry Sanders Show, and Westworld, so it isn't completely reliant on Game of Thrones for subscribers. That said, the loss of one of its biggest headliners and the shakeup at the cable unit suggest that HBO will have to bring its A-game if it wants to continue to prosper in the changing media landscape.