There are big changes happening within the media conglomerate -- and not all of them are good.

More than five years ago, Netflix ( NFLX -0.21% ) Chief Content Officer Ted Sarandos announced the company's overall strategy to the world: "The goal is to become HBO faster than HBO can become us." HBO, now owned by AT&T ( T 3.69% ), has long been known as a boutique operation focused on the quality of its programming, but churning out far fewer programs than Netflix.

Netflix has 139 million paying subscribers worldwide and no longer sees HBO as its biggest competitor. The company said in its fourth-quarter shareholder letter, "We compete with (and lose to) Fortnite more than HBO," referring to the popular free-to-play video game by Epic Games.

Now, AT&T has decided it wants to take the fight to Netflix, via a sweeping restructuring of its media business, but it may hobbling one of the most important tools in its arsenal. 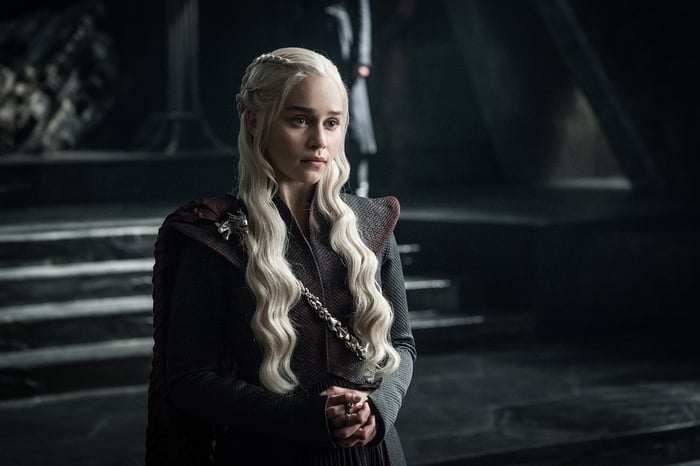 Emilia Clarke in a scene from HBO's Game of Thrones. Image source: HBO.

Robert Greenblatt, who recently served as chairman for NBC Entertainment, will become chairman of AT&T's WarnerMedia Entertainment and its direct-to-consumer efforts. WarnerMedia, formed after AT&T's acquisition of Time Warner last year, would also reorganize its operations into a number of new or expanded segments: entertainment; live programming, including news and sports; and content production, including films, television and games operations. The company will also consolidate its affiliate and advertising sales under one roof.

These changes come as WarnerMedia prepares to launch yet another streaming service, which will feature content from all the company's brands, including Warner Bros., HBO, and Turner, as well as licensed content. The subscription service will be positioned to compete against Netflix, as well as the soon-to-be-launched over-the-top service by Disney ( DIS 3.55% ), and is expected to debut in the fourth quarter of 2019.

Last week the company dropped a bombshell, saying that Richard Plepler -- who has been with HBO since 1992 and has led the successful cable unit since 2013 -- was resigning. Plepler has long been credited with HBO's success due to his keen eye for spotting potential megahit programs like Game of Thrones and Westworld. He also gave the green light to HBO Now in 2015, one of the first outlets to offer an over-the-top service outside of its cable domain. Plepler isn't the only one throwing in the towel. David Levy, president of Turner Broadcasting, is also stepping down, after 33 years with the company. Levy started as an ad sales exec with Turner in 1986, rising to president of the unit in 2013.

Many see these high-profile defections as a sign that not everyone agrees with the sweeping changes being mandated by AT&T. HBO has been one of the few legacy cable outlets that was seen as being able to compete with the likes of Netflix and Disney in the changing media landscape.

Just because you can, doesn't mean you should

It's important to remember that in the run-up to AT&T's acquisition of Time Warner, the company said it would leave HBO largely unchanged, free to continue the hit-making that led to its domination of the annual Emmy Awards for 17 consecutive years -- along with billions of dollars in profits. Those promises went by the wayside last year when WarnerMedia CEO John Stankey said that HBO needed more "hours a day ... not hours a week" from viewers. In order to achieve those goals, the king of cable would need to pump out more original content.

Plepler, who made HBO the most successful premium cable TV network, must have seen the writing on the wall, and his departure marks a changing of the guard. With a laundry list of hit shows like The Sopranos, The Wire, and Veep, HBO established itself as the go-to place for quality entertainment and was called the "crown jewel" of the AT&T/Time Warner merger. With Plepler gone, you have to wonder whether its successful run can continue.

As the new owner, AT&T absolutely has the right to make whatever changes it sees fit -- but that doesn't necessarily mean it should.