TVision Home is remarkably similar to some of the most popular pay-TV options on the market already.

When T-Mobile (TMUS -0.76%) acquired Layer3 TV at the end of 2017, it had grand aspirations of disrupting the pay-TV industry, merging everything the internet has to offer with traditional linear TV, and offering an "Un-carrier experience" for television. After a delayed launch, T-Mobile on Wednesday announced TVision Home, a premium television service that looks a lot like the two biggest pay-TV services in the U.S.: Comcast (CMCSA -0.17%) and AT&T's (T -1.57%) DirecTV.

T-Mobile will charge customers $100 per month for TVision and give T-Mobile wireless subscribers a $10-per-month discount (which is available to all subscribers for a limited time). The service is only available via T-Mobile's own set-top box, for which it charges $10 per month each. So, a family with two televisions will pay $110 per month for approximately 150 channels of content. The service will go live in eight cities on April 14.

In the company's press release, it implores consumers to "compare that to the average cable bill of $107.30/month." Well, it looks pretty darn comparable. 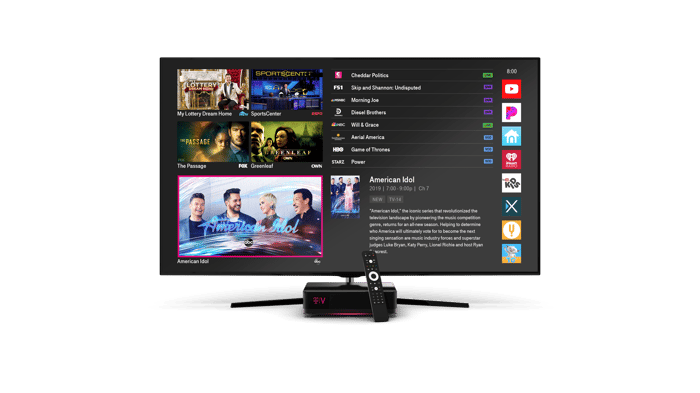 There's no skinny bundle option like YouTube TV or Hulu Live. Even Comcast offers customers a low-priced skinny bundle of channels. There's just one high-end channel package, plus the option to add premium cable networks like HBO or Showtime.

The difference will be in the customer experience. T-Mobile offers transparent pricing on its wireless service and the same level of transparency for TVision. No hidden fees or extra taxes -- just pay a flat fee for service and any set-top boxes you need. The company says that the price won't increase unless customers change the service, too.

T-Mobile prides itself on providing excellent customer service, and it plans to bring that level of customer care to the cable industry. Americans hate their cable providers and that ire is only growing stronger. T-Mobile might be able to take advantage of that.

T-Mobile is falling well short of expectations. President and COO Mike Sievert did his best to reset what investors and consumers should expect during the company's fourth-quarter earnings call. He described the company's TV strategy as having two pieces: a home piece, which turned out to be TVision, and a mobile piece, where the company aggregates streaming services.

Previously, indications were that T-Mobile would integrate home TV and mobile devices more closely. Unlike YouTube TV or Hulu Live, however, TVision is for home television viewing only. Subscribers who want to watch TV outside of their home have to rely on the same TV Everywhere apps as traditional pay-TV providers.

Pushing for the Sprint merger

T-Mobile also took the opportunity to talk about its proposed merger with Sprint (S), which is currently under review by the Federal Communications Commission, and how it will help the company compete against what it calls Cableopoly. "TVision Home is part of T-Mobile's 5G strategy and vision to give consumers real options to the cable companies, and that starts with the Sprint merger," the company wrote in its press release.

T-Mobile wants to use Sprint's spectrum holdings and other assets to build out a 5G network capable of delivering home broadband to about half the country. T-Mobile started testing its home broadband service in rural markets last month. It's no coincidence: T-Mobile is incentivizing customers with satellite (which is more concentrated in rural markets) to switch to TVision with up to $500 to offset cancellation fees. T-Mobile wants customers to take both television and internet service together.

T-Mobile's efforts in TV and home internet are a signal to the FCC that it's serious about taking on the cable industry, and it sees a much broader competitive landscape than just wireless carriers. Whether TVision's "disruptive" service is enough to help T-Mobile and Sprint gain approval for their merger remains to be seen.